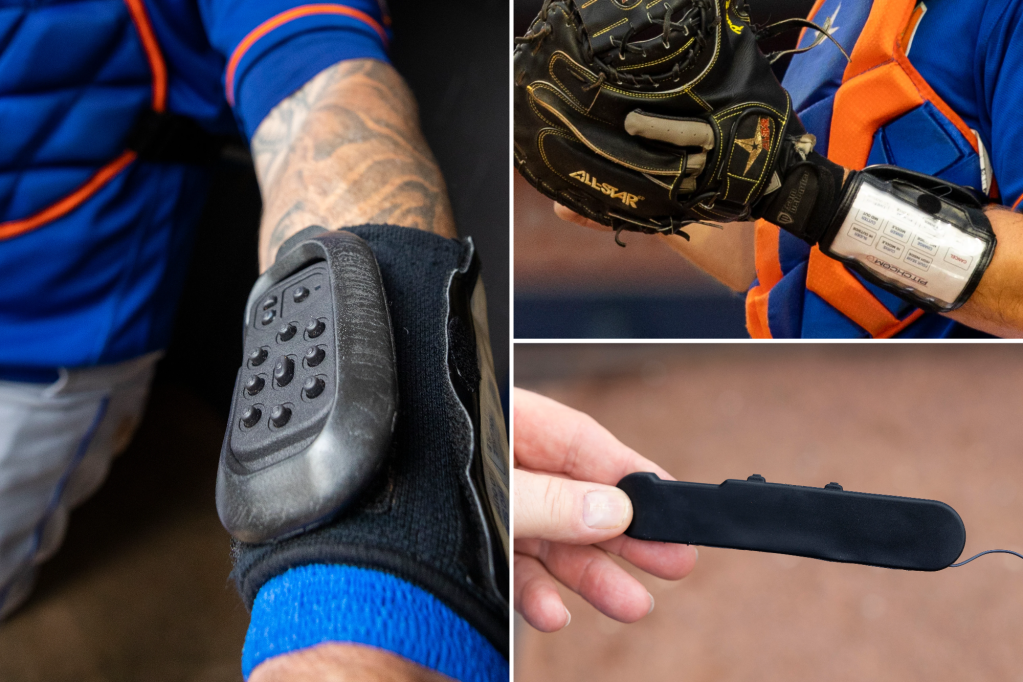 PORT ST. LUCIE – For some Mets, the introduction of PitchCom – a wearable device sending pitch signals from the catcher to pitcher – has been a welcome development.

“I really like it,” Carlos Carrasco said Thursday after using it in an intrasquad game.

For others, not so much.

Naturally, one of their catchers sits somewhere in between.

“It’s a little awkward at first, just because you’re not used to it,” said James McCann. “I’m used to sticking my hand between my legs and putting down signs, so I catch myself starting to do that and then realize, ‘Wait a second, I got to press something on my wrist.’ I’m kind of in the middle on it right now as far as how I really like it. It’s just different. ”

The primary benefits of the device – which could be implemented as soon as this season, according to manager Buck Showalter – are twofold. The technology keeps opponents from stealing signs from second base (or elsewhere) and can also improve pitchers’ tempo on the mound. But some have warmed up to it quicker than others.

Instead of a catcher putting down a series of signs on every pitch, he is wearing a sleeve on his wrist with buttons. Depending on which ones he presses, he can transmit the pitch type and location to a pitcher, or call for a pickoff or pitchout.

“It’s actually incredible how many things you can do with it,” said catcher Tomas Nido.

On the mound, the pitcher is wearing an audio piece in his hat and hears an automated voice call the pitch. Four other fielders can wear the audio piece at a time, including the catcher, but that’s where McCann has some concerns.

Depending on the crowd noise at a given stadium, the volume will need to be adjusted. And if McCann needs to raise it loud enough to hear it from its spot above the ear flap in his mask, the batter who is standing a few feet away might also be able to hear it.

“A lot of people say, ‘Well they have it in the NFL,'” McCann said. “Except in the NFL, the quarterback is 15 yards away from the closest defender. “So that’s one of the things that concerns me a little bit, how loud is too loud?”

While Carrasco enjoyed it from his end Thursday, noting how he can get the pitch signal quicker, Chris Bassitt used it for an inning before switching back to regular signs. Nido said Bassitt likes to work fast and they were working faster without PitchCom.

Bassitt was noncommittal on whether he would use it in the regular season if allowed, but McCann and Nido said they would go by what their pitchers preferred on a given day (or inning).

“When a hitter gets in the box, he can be tapping the plate and you gotta wait for him to look up at the pitcher to put a sign down because you don’t know if his eyes can look back and see what sign you.” re giving, ”McCann said. “But with the PitchCom, you don’t have to wait.

“I think it’s one of those things that guys are gonna be a little resistant to it from the get-go because it’s different. It’s just a different thing, but it could be something that does help the pace of play. “

Ernesto Castro
The Masked Singer: Season Eight? Has the FOX Series Been Cancelled or Renewed Yet?
‘I Take Full Accountability For My Actions’: Kevin Hunter Had Quite A Lot To Say Instagram As He Addressed Hurting Wendy Williams