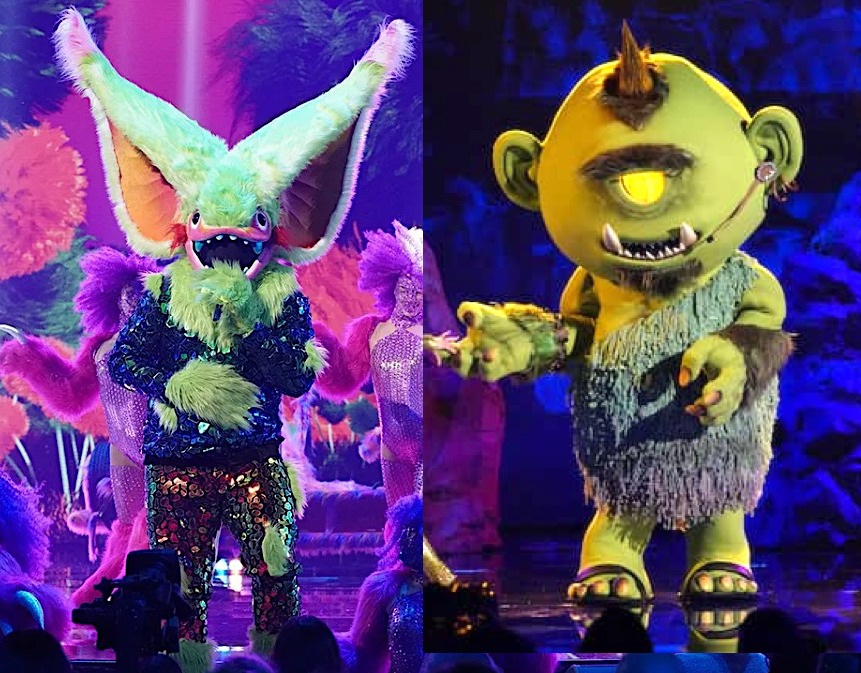 The Masked Singer Season 7’s Group A round wrapped Wednesday with a suspenseful, if seemingly premature, double-elimination. And following this season’s previous puzzling reveals of Food Network star Duff “McTerrier” Goldman and sportscaster Joe “The Ram” Buck, this week’s castoffs were, once again, not professional singers. But just as Duff and Joe showcased some surprisingly strong vocal chops, these latest contestants proved that they too possess secret singing skills.

I’d previously guessed that this week’s first eliminated celebrity from Team Bad, the Cyclops, was Hootie & The Blowfish frontman-turned-country solo star Darius Rucker. This week, Judge Jenny McCarthy-Wahlberg, who has a pretty solid guessing track record, said, “I feel like we should know that voice” and insisted, “It has to be a musician! ” Jenny even guessed this was “major country-rock star” Zac Brown. But the Cyclops turned out to be… actor Jorge Garcia, aka Hurley from Lost.

Jorge’s only real connection to music is when he appeared on the Hurley album cover by his favorite band, Weezer – a life highlight that he vaguely referenced in this week’s clues package. But he threw all the judges off when, instead of doing a Weezer tune, he “relived that joy” by belting… Irene Cara’s Flashdance theme. The judges were totally impressed, however, once they learned the true identity of the green-eyed monster. “What a feeling! That was electrifying! ” raved Nicole Scherzinger. So, Jorge definitely took his passion and made it happen, even if he didn’t make it to the end.

I’d guessed that Wednesday’s second eliminee, Team Cuddly’s Thingamabob, was wrestler-turned-Fozzy heavy metal singer Chris Jericho – as did Jenny. But it turned out to be another crooning athlete, Philadelphia Eagles player Jordan Mailata. Judge Ken Jeong described Jordan’s performance of MKTO’s retro pop hit “Classic” as “fun and effortless,” and upon Thingamabob’s blindsiding reveal, host Nick Cannon exclaimed, “Who knew that you had those type of skills? That voice, man! We would never know. … Such range! Such ability! ”

As for the Group A bracket’s pre-elimination “Final Showdown,” all three contestants faced off on James Brown’s “I Got You (I Feel Good),” and it was shockingly close – Judge Robin Thicke said they were all “singing their butts. off! ” But Team Good’s Firefly was ultimately Group A’s last mask standing, and I firmly believe that this The contestant is an actual pro singer and veteran entertainer. The judges guessed that the Firefly might be Alicia Keys, Ciara, or Keyshia Cole… but I’m convinced that it’s Teyana Taylor.

The Firefly has “always been a shining star” and has revealed that Pharrell Williams was a key early figure in her career – and Teyana signed a deal with Pharrell’s Star Trak Entertainment record label way back in 2005. One of this week’s clues was a framed photograph of Kanye West, and Teyana was also signed to Ye’s GOOD Music label, has sung on West’s My Beautiful Dark Twisted Fantasy album, and practically broke the internet when she appeared in his sexy “Fade” video.

The Firefly’s previous visual clues have included a program guide for the Apollo Theater and the Statue of Liberty (Teyana was born in Harlem and in 2008 appeared on It’s Showtime at the Apollo); a framed photo of Tyler Perry (Teyana acted in Tyler Perry’s Madea’s Big Happy Family); and a fire alarm (Teyana choreographed Beyoncé’s “Ring the Alarm” music video.) Both Jenny and Nicole have praised the Firefly’s “dancer’s legs,” “beautiful thighs,” and expert choreo, and Teyana is an extremely fit professional dancer and former America’s Best Dance Crew judge. Plus, this luminous, Tinkerbell-like creature’s resonant, raspy voice – as showcased this week during “I Got You” and her solo performance of Charlie Puth’s “Attention” – sounds just like the attention-getting Teyana.

And so, Firefly will be flying off to the semifinals, and Nicole excitedly predicted that “she’s going all the way!” But before that round, Group B will begin competing next Wednesday, when we’ll meet some new mystery celebrity cosplayers from Team Good, Team Bad, and Team Cuddly – like Queen Cobra, Frog Prince, Space Bunny, Baby Mammoth, Miss Teddy, and what is being hyped as the “most out-of-control costume in Masked Singer history, “the Hydra. (Side note: By this seventh season, this show is obviously running out of character names.) See you then, as the guessing game continues apace.