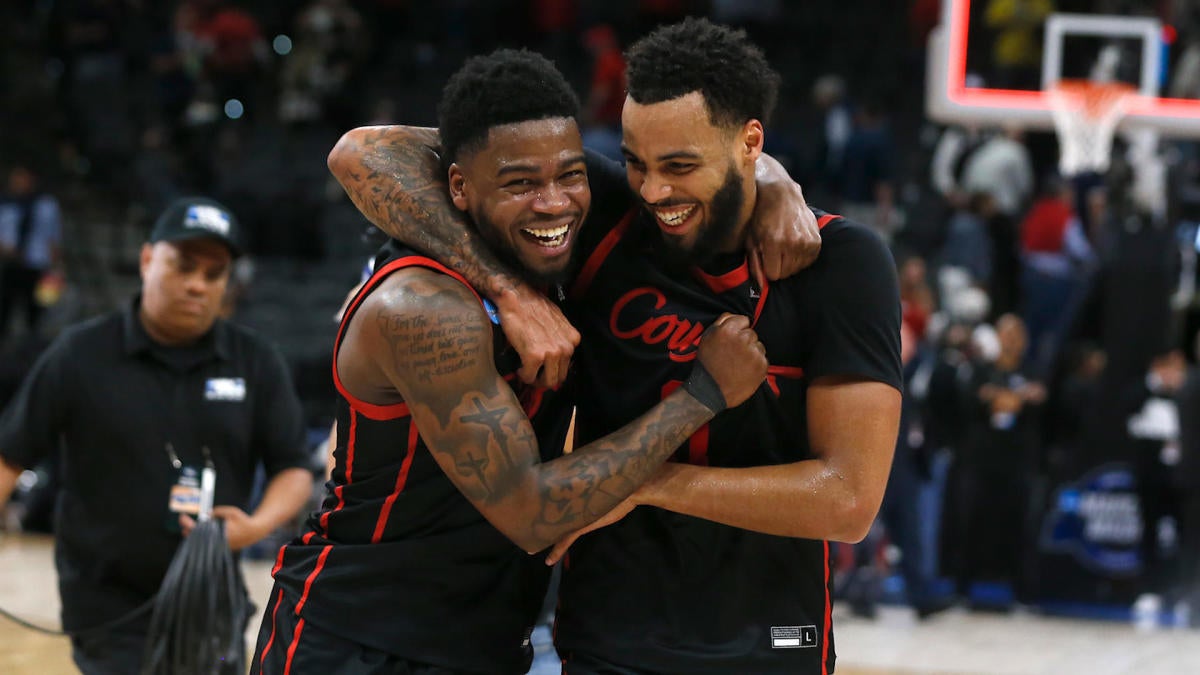 There were just four Sweet 16 games on Thursday’s NCAA Tournament docket, but those four contests packed quite a punch as two of the three renaming No. 1 seeds went down. First was No. 1 overall seed Gonzaga, which fell 74-68 to No. 4 seed Arkansas in the West Regional. Then came Arizona, which lost 72-60 against No. 5 seed Houston in the South Regional.

Those results left No. 1 seed Kansas from the Midwest Regional as the lone remaining top seed in the bracket after the fourth No. 1 seed, Baylor, failed to escape the tournament’s first weekend. The Jayhawks take on No. 4 seed Providence on Friday, and if they can’t survive this weekend, it will mark the first time since 2011 that no. 1 seeds have reached the Final Four.

The high-powered offenses of Gonzaga and Arizona both struggled to find their optimum gear against gritty defensive-oriented opponents on Thursday. Defense was also the flavor of No. 2 seed Villanova’s 63-55 win over No. 11 seed Michigan in South Region action

But the night wasn’t a total loss for offense in the sport. No. 2 seed Duke shot 70.8% in the second half to defeat No. 3 seed Texas Tech 78-73 in West Region action. Here are some takeaways from the night’s action.

With three freshman starters and no players with significant NCAA Tournament playing experience in a Duke uniform, the Blue Devils have been one of the least-experienced teams in the country all season. Inexperience is typically only magnified in March, but Duke’s young squad handled the big stage like pros on Thursday.

Freshman phenom Paolo Banchero led the team with 22 points on 7 of 12 shooting and flashed his outside shot by hitting 3 of 4 shots from 3-point range. Sophomore big man Mark Williams made key plays throughout the night and finished with 16 points and 8 rebounds. Freshman wing AJ Griffin and sophomore guard Jeremy Roach were key to the team’s offensive surge as well.

Texas Tech opened up a 10-2 lead in the opening minutes, and it seemed fair to wonder if the moment might be too big for a Duke squad playing in the shadow of coach Mike Krzyzewski’s lingering retirement. But the Duke players had an answer for every Texas Tech punch, and their coach was certainly proud of them after his 100th career NCAA Tournament victory went final.

Houston does it again

A year after making the program’s first Elite Eight since 1984, Houston is going back again. The Cougars had every reason to rest on the laurels of last season’s accomplishments after season-ending injuries to Marcus Sasser and Tramon Mark derailed their depth early in the season.

But even after losing those two key guards, Houston has kept on plugging. Arizona’s 60 points against the Cougars were the second-fewest it has scored in a game all season. Regular season AAC and AAC Tournament titles were impressive enough to put Kelvin Sampson in the national coach of the year conversation.

Reaching the Elite Eight should catapult him to the forefront of that discussion along with the coach he defeated Thursday, Arizona’s Tommy Lloyd. To be clear, the Cougars have some studs on their roster such as Jamal Shead and Kyler Edwards, who combined for 40 points against Arizona. But the coach whose held it all together this season is the program’s superstar.

When Gonzaga has been at its best this season, it has gotten big games from its guards. In the second round against Memphis, Andrew Nembhard and Rasir Bolton combined to hit 12 of 21 shots from the floor. In the WCC Tournament title game against St. Mary’s, the duo made 13 of 24 shots from the floor.

But against the Razorbacks, Nembhard and Bolton made just 5 of 21 attempts from the floor. As a team, Gonzaga was also 5 of 21 from the 3-point range, which was well below its season 37.4% mark entering the game.

Back court struggles were a common theme in the Zags’ four losses this season. Nembhard and Bolton were 8 of 19 against Duke, 5 of 17 against Alabama and 11 of 28 in a regular season loss to St. Mary’s. On the whole, Gonzaga’s guards were great this season. But there was an offensive drop off from last year’s squad that featured Nembhard, Jalen Suggs, Joel Ayayi and Corey Kispert.

That drop off was too much to overcome on a night when Holmgren was limited by foul trouble.

Against a mismatch nightmare in 7-footer Hunter Dickinson, No. 2 seed Villanova on Thursday comfortably advanced into the Elite Eight by tasking senior Jermaine Samuels – all 6-foot-7 of him – to act as Dickinson’s primary defender and match up with him on the other end by dragging him into actions all over the court on the other end. The result: Villanova 63, Michigan 55 – and a game-high 22 points from Samuels in the winning effort.

“He was awesome. I was really proud of his effort on the defensive end. We asked a lot of him,” said Wildcats coach Jay Wright. “It was a gutty effort, man.”

Samuels, a senior, stepped up in a big way after senior guard Collin Gillespie got dinged up just before halftime and was able to chip in only three points and one assist in the second half. He and fellow senior Caleb Daniels were nails down the stretch to close out the win, showcasing why the Wildcats are bonafide contenders.

Experience alone doesn’t and won’t win Villanova another chip, mind you, but this team has been battle-tested. Gillespie and Samuels were both on the 2018 title team. They know what it takes to keep advancing in the bracket. That should be a real asset for them moving into the Elite Eight and with No. 1 seed Arizona bowing out on Thursday, the door is open for them to sneak into the Final Four and potentially win a third title since 2016.

Ernesto Castro
Kylie Jenner’s son has a Louis Vuitton teddy bear that retails for over $20,000
Was this the worst night in Oscars fashion history?