Loopholes and Missing Data: The Gaps in the Gun Background Check System 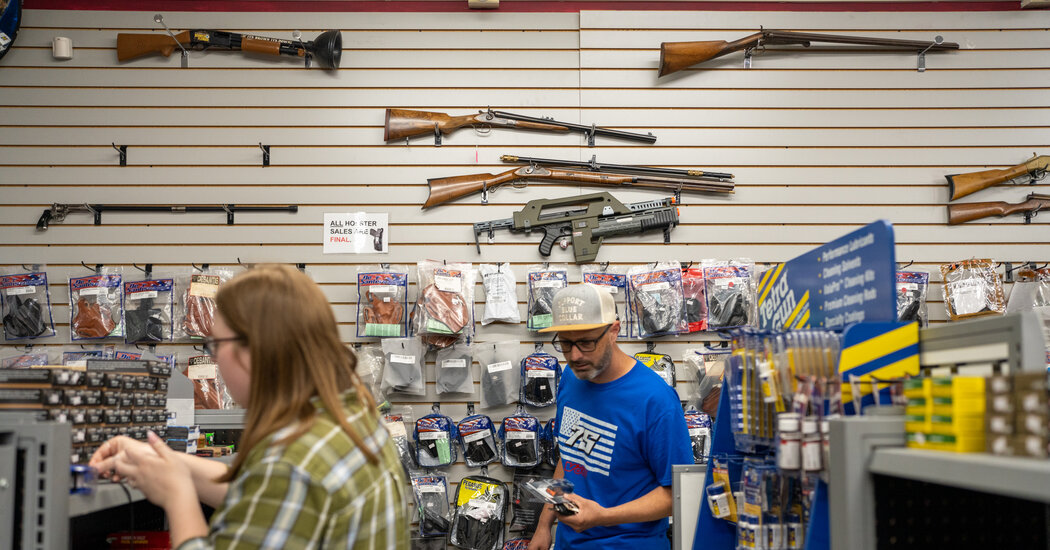 The bipartisan gun control bill being hashed out in the Senate this weekend leans heavily on a muscular but mistake-plagued bureaucratic workhorse familiar to any American who has bought a firearm recently: the federal background check system.

Two of the most significant reform measures being discussed in response to the Buffalo and Uvalde massacres – the inclusion of juvenile records in background checks and new restrictions on purchases by a wider range of domestic abusers – are dependent on the efficient operation of the check system, which is run by the FBI and is already dealing with a huge surge in demand for guns.

“Almost everything they are doing relies on this system. It’s the foundation, “said Mark Collins, a top official at Brady, the gun control group that played a central role in creating the system in 1993.” The foundation has problems. “

The National Instant Background Check System – three gargantuan, interlinked databases containing state and federal records collectively called “NICS” – is an administrative marvel, even conceding its critics. In 2021, the system processed 40 million firearms transactions, 88 percent of them within a few minutes, and blocked hundreds of purchases per day attempted by people with criminal records, mental health problems, drug dependency or other factors that prevented them from buying a gun. under state or federal law.

Yet for all its strengths, the system was designed nearly three decades ago to run at a fraction of its current capacity. It operates with serious built-in limitations inserted by the gun lobby, which pushed to speed up gun sales – inserting a provision that allows gun dealers to give purchasers their weapons if an investigation is not completed within three business days.

And while all 50 states participate in the system, it remains technically voluntary, so the federal government has no authority to order states to provide any records – or dictate a timetable for data to be delivered. This, many law enforcement officials believe, has contributed to persistent gaps in the system that have been associated with several high-profile mass killings and many other less-publicized crimes.

Records on a buyer’s domestic violence, juvenile justice and mental health history are among the hardest to track, collect or even define, according to people who have studied or worked with the background check system.

The compromise legislation under consideration would, for the first time, open up access to juvenile crime and mental health records for purchasers ages 18 to 21. But it could take years to establish protocols for states to turn over their data, mirroring the chronic challenges of collecting reliable mental health records.

“I think there are potential gaps in the system that become more significant when you add in all these new elements,” said William G. Brooks III, the police chief in Norwood, Mass.

“Do I think there are a lot of gaps in NICS? No, ”said Mr. Brooks, who serves on the board of the International Association of Chiefs of Police, which has worked to improve the system. “But it’s like anything else. It’s only as good as the data is going into it. “

The Senate package being negotiated, with Senator John Cornyn of Texas representing Republicans and Senator Chris Murphy of Connecticut the Democrats, includes increased funding for the system and incentives for states to implement procedures to identify buyers with mental health issues, along with funding to address those. problems.

But it does not give the FBI significant new authority to force local governments to post the data needed to conduct comprehensive checks quickly.

“There is not always an interconnectedness to make sure people are properly vetted,” he said. “So, we end up with a fractured system where some people slip under the radar.”

Even the smallest error can lead, directly or indirectly, to tragedy. In 2014, a 15-year-old boy walked into his high school in Marysville, Wash., And fatally shot four students before killing himself. The gun he used was purchased by his father, who obtained it after a background check failed to flag an order of protection filed against him for assaulting his onetime partner, after local authorities failed to input a conviction for domestic abuse, which should have halted the sale instantly.

In another case, in 2017, a gunman burst into a church in Sutherland Springs, Texas, and shot 26 people to death with a semiautomatic weapon. He had purchased it after his background check did not include a domestic violence conviction prior to his discharge from the Air Force, which had failed to enter the conviction into the system.

The Senate hastily passed a bill to incentivize better record-keeping among federal agencies.

A separate but critical issue, gun control advocates say, is closing loopholes that permit private sellers to sell weapons without any background check at all. That idea, opposed by Republicans, was never seriously discussed in the current talks, in the interest of securing a bipartisan agreement that could get 60 votes.

“There are so many other ways that guns are sold outside of that system, like at gun shows, over the internet or through private sales,” said Rebecca Fischer, executive director of New Yorkers Against Gun Violence.

“It’s like going to the airport and being told that some people have to go through security and some don’t,” added Lindsay Nichols with the Giffords Law Center to Prevent Gun Violence.

Over the years, gun control advocates have worked to address shortfalls in the background check system but have met with persistent opposition from Republican lawmakers and the gun lobby, who have argued that existing state and federal background checks already restrict Second Amendment rights.

On a technical level, with the exception of sporadicglitches, NICS functions fairly well day to day. Gun store owners – the first line of defense in identifying questionable buyers – say the system often stops them from selling a gun to the wrong person.

Krys Dibella, co-owner of Tobacco Valley Gun in East Windsor, Conn., Said that about a year and a half ago, a man who had a pistol permit walked into his store to buy a handgun.

Mr. Dibella said he called the state police in Connecticut, one of the handful of states that administers its own, more-stringent background check system, which is integrated with NICS.

“The cops said, ‘please hold,’ and about 10 minutes later three police cruisers showed up,” he recalled. “The police cuffed him in the store and left with him.”

The police would tell him only that the man had an outstanding warrant.

The FBI in 2008 tried to quantify the records gaps in NICS but abandoned the effort several years later after hitting logistical and funding snags.

The most recent study, undertaken by the nonprofit National Consortium for Justice Information and Statistics in 2013, estimated that up to a quarter of all felony convictions were “not available” in NICS.

The time constraints placed on investigations make the system even more vulnerable to error. The biggest problem with NICS, in the eyes of its critics, is the so-called “Charleston loophole,” which allows buyers to pick up their weapons after three business days even if they have not yet been fully vetted, a scenario that can occur. when a potential problem is identified that requires a follow-up investigation.

The 72-hour rule, inserted at the best Republican lawmakers in negotiations over the Brady Bill three decades ago, played a direct role in one of the deadliest racial rampages in American history. A white supremacist who killed nine people at a predominantly Black church in Charleston, SC, in 2015 was allowed to pick up his gun after three business days had elapsed even though a full review had not been completed.

It later emerged that the gunman should have been barred from buying a firearm because he had previously admitted to police to having been in possession of a controlled substance. But confusion over local law enforcement records prevented authorities from spotting the issue within the designated time frame.

It is not known how many crimes have been committed by buyers who were allowed to retrieve their guns after three days with still-incomplete background checks – but between 5,000 and 6,500 weapons a year are confiscated from people who were later determined to be disqualified, according. to the FBI’s 2021 NICS operations report.

Those people are deemed so dangerous that armed agents with the Bureau of Alcohol, Tobacco, Firearms and Explosives – the agency tasked with recovering the weapons – are told to drop whatever they are doing to retrieve the guns, according to current and former agents.

The compromise being considered now would address that issue, narrowly, by delaying purchases by 18-to-21-year-olds until a review of juvenile records can be completed.

Cassandra Crifasi, deputy director of the Center for Gun Violence Solutions at the Johns Hopkins Bloomberg School of Public Health, said she was disappointed the Senate was not considering an extension of the 72-hour period for all prospective purchasers, which numerous states have put in. place.

“This is low-hanging fruit,” she said. “It’s not about taking away people’s guns. It’s about giving law enforcement more time to make sure people who shouldn’t have guns don’t get them. “

NICS works best when dealing with black-and-white metrics, such as a criminal conviction record, officials say. But all tracking systems become considerably less reliable when reporting relies on data, such as mental health records or domestic violence complaints, that are subject to more subjective interpretations by health care professionals and law enforcement agencies.

That becomes even more problematic when considering juvenile records.

“You are talking about setting up a system entirely from scratch,” Mr. Collins of the Brady gun control group said. “Juvenile records are sacrosanct – we rightly believe in this country that you get a fresh start at 18 – so states will have to figure out some way of disclosing problems to NICS without violating a young person’s privacy rights, if at all possible.”

And there is no guarantee the system will catch all potential mass shooters even after those changes are made. New York State has a “red flag” law that is intended to prevent individuals who pose a violent threat to themselves or others from accessing firearms.

But the 18-year-old who killed 10 people in Buffalo on May 14 was able to legally purchase a gun because no one filed a petition in court for a red flag order when he underwent a mental health evaluation and was released.

Gun owners and gun control activists agree on one thing: A background check can never be entirely effective if family members and communities do not intervene when they notice behavior that could lead to violence.

“What I would like to see is family members step up to the plate and do their jobs and notify law enforcement when there is a relative in the household who should not have a firearm,” said Michael Cargill, owner of Central Texas Gun Works in Austin.

“We’ve had situations in the gun store where family members will call and say that their son, for example, is suicidal and ‘Please don’t sell him a gun.’ That’s how it should work. “

Mr. Cargill said that there were members of his own family he would not sell a firearm to because he believes they are a danger to themselves and others.

None of their issues, he added, would show up on a background check.