Logan Storley responds to ‘excuses’ from Coker, MVP: ‘If you’re so good, why didn’t you knock me out?’ 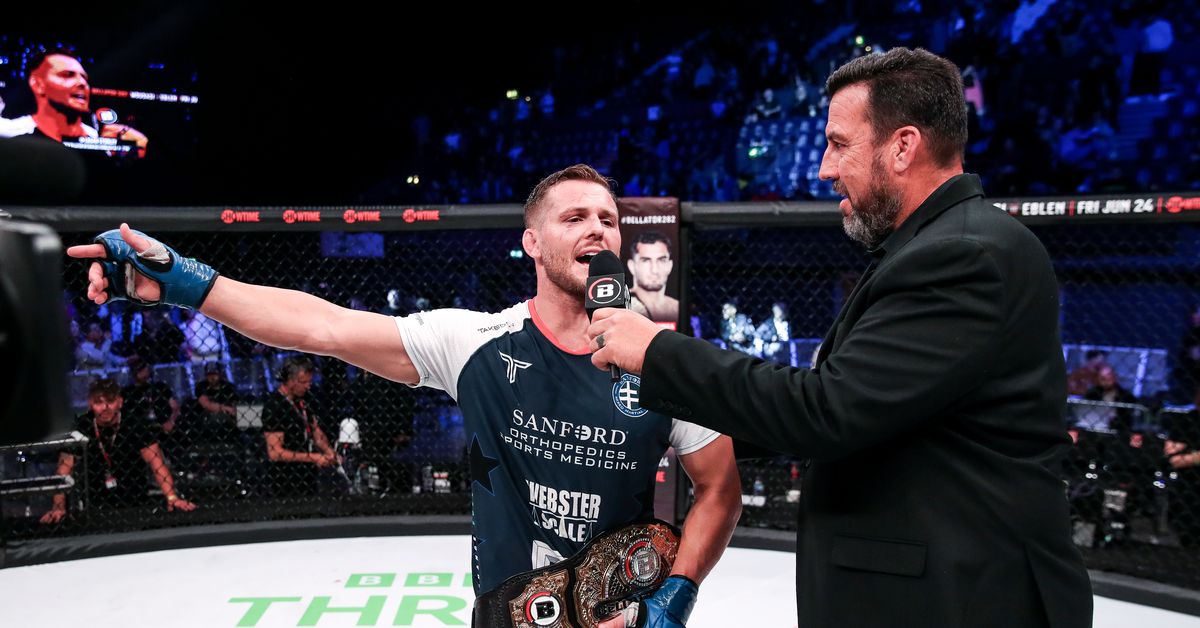 Logan Storley achieved one of his ultimate goals at Bellator 281 when he became the promotion’s interim welterweight champion, but his split decision win over Michael “Venom” Page has also come along with a mountain of criticism.

The four-time All-American wrestler from the University of Minnesota grounded Page with a grappling-heavy performance to win the interim belt, scoring multiple takedowns in the 25-minute fight. Afterward, Page slammed Storley’s game plan in an appearance on The MMA Hoursaying the wrestler “didn’t come to inflict damage, he came to survive.”

In response, Storley fired back at Page for his inability to stop his wrestling, much less get up from the bottom to do much damage of his own on the feet.

“I think he’s a great dude and he’s a hell of a fighter and I respect the hell out of ‘MVP,’ but at the end of the day, you couldn’t stop a takedown,” Storley told MMA Fighting. “You couldn’t stop anything I was doing on top. You couldn’t get away from me. Anyone that has a problem with that, I don’t know what to tell you.

Page had his best performance in the fourth round, however he spent the majority of the fight fending off Storley’s wrestling, which was really the story of the bout.

Storley complimented Page on his quickness and distance control regarding the moments the action did stay standing, but the flashy Englishman still failed to land anything that really dazzled the judges scoring cageside.

“You can’t sit here after the fight and come up with all these excuses,” Storley said. “I stood on the feet with you for eight to 10 minutes and you couldn’t hurt me. If you’re the world’s best striker and you’re so dangerous and it only takes a split second, well, you didn’t find it. “

Storley also took aim at Page’s statement that he only needed to fix “one thing” in his game and he would become “the most lethal MMA fighter in the world.”

“I just think it’s kind of arrogant,” Storley said. “I really respect him, I think he’s a great dude, but guess what? I don’t have the 20 years of boxing like I do in wrestling, and I understand that.

“It’s funny when I hear fighters say, ‘If I fix one thing, I’ll beat this guy.’ Well, I wish you the best of luck with that. “

Storley also faced criticism from Bellator MMA president Scott Coker, who declared afterwards that he scored the fight for Page. Coker condemned Storley for a wrestling-heavy game plan that he believed didn’t create any real threats in the fight, but instead amounted to Storley just “laying on somebody,” and “that’s not MMA.”

While Storley understands that everybody is entitled to their opinion – including his boss at Bellator – the 29-year-old South Dakota native isn’t going to apologize for taking his best possible path to victory.

“I mean, to each his own,” Storley said. “I think Scott scored it 48-47 Page, but which two rounds are you giving me? If you’re going to give me two rounds, why not give me the other two? You’re just guessing at this point. I respect Scott, me and him have a good relationship, but you can’t just pick and choose rounds that, ‘Oh, MVP won this.’ One, two, three, and five was clearly me, so which rounds are you giving me?

“I respect Scott and we have a good relationship and Bellator’s done a lot for me. I love working for those guys, but I get it. Neiman Gracie, that’s a big guy of theirs – I beat him up. Then you have MVP, you’ve got the UK draw – I beat him up. So yeah, if you want to be mad, be mad. But I don’t care. I’m a world champ, and if they’re not happy, put whoever you have in front of me next. “

In the grand scheme of things, Storley acknowledges that he still has plenty of room to improve, but he also won’t express regrets for beating Page in the most effective way available to him.

“I have a brain and I know how to calculate things and I know where people are good, but I did what I had to do and I have the belt,” Storley said.

“If anyone has a problem with that, I’m sorry. I always wanted to put on exciting fights, but I did what I had to do to win the fight. “