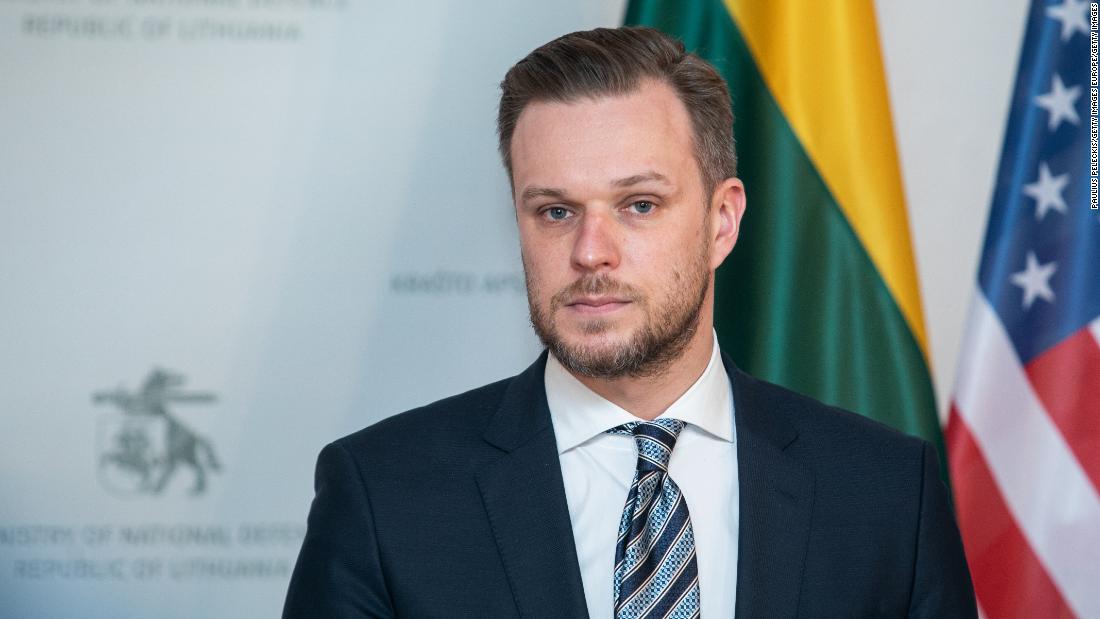 Speaking to CNN in Washington on Tuesday, Landsbergis also said his nation is seeking a permanent US troop presence, calling it “the biggest deterrent to an aggressor like Russia,” as well as fortified support from NATO at next month’s leaders’ summit in Madrid.

Lithuania has been a strong supporter of Ukraine since the start of the war more than two months ago and has pushed for a robust response to counter Russia, becoming the first country in the European Union to stop Russian gas imports.

Landsbergis said the United States and European allies have thus far been focused on their “tactical approach” to the war in Ukraine, responding to developments on the ground.

However, the foreign minister stressed that they also need to think strategically about the longer-term – and until Putin and his enables are gone, the world needs to be prepared that Russia “might war again, and not excluding NATO countries.”

“There are countries that are expecting that we just have to wait it out and kind of wait for the war to be over and then we’ll get back to the business as usual,” Landsbergis said, who argued that “Russia is out of the civilized world order … they no longer belong to this. “

“Russia’s warmongering state will be over when the regime is over in Russia. That’s the only way we see it,” he said.

Landsbergis did not suggest the West should take concrete action to remove Putin from power and acknowledged that “it might take quite some time for it to change, because we don’t have any active means to change it. So it needs to change from within. . “

Moreover, Landsbergis explained it would not be enough just for Putin to no longer lead Russia because “it’s a whole system.”

“Putin might be sick, he might be pushed aside by his inner circle – who’s probably quite unhappy about the losses in the battlefield – but that doesn’t mean that the regime will change or its attitude, the war mongering attitude will change. , “he said, saying it was reminiscent of Nazi Germany.

Landsbergis told CNN that Putin’s Victory Day speech on Monday suggested there may be discontent among that inner circle about Russia’s failures in the war, saying it was “fascinating” that the Russian president “tried to explain” why he started the war in those remarks.

“Who he is explaining it to? His public? Well, they don’t need explanation,” the foreign minister said, noting the general Russian public’s approval of the invasion. “Us? You know, we don’t believe him. I mean, we know the facts, you know, we knew them all along.”

“So my guess would be that he’s explaining it to his circle … people who might lose trust in him. So he has to rally them that this was a good decision,” Landsbergis said.

The top Lithuanian diplomat predicted that Putin “will become more and more paranoid as to who he can trust, and he will feel that there is more and more discontent growing around him due to the losses on the battlefield, and that might make his moves – – especially within the (inner) circle – more erratic. “

Such erratic behavior could lead him to strike a NATO country, which is why “NATO’s decisions are so vital to countries like Lithuania” – one of the geographically closest NATO nations to Russia.

“We have to know that we are protected,” Landsbergis said.

Landsbergis told CNN that addressing such security concerns was a key topic of his meeting with Deputy Secretary of State Wendy Sherman on Monday in Washington, and will be a focus of discussions with NATO leaders discussing the eastern flank at the Madrid summit in June.

Landsbergis said Lithuania wants a permanent troop presence on the “Suwalki corridor” – which sits on the Lithuanian-Polish border and links Belarus to the Russian enclave of Kaliningrad in the Baltics – a permanent US troop presence, and the possibility for allies to send. a brigade-level deployment. Landsbergis also said Lithuania seeks integrated air defense capabilities, similar to Israel’s Iron Dome.

Landsbergis told CNN that his country hasn’t gotten a clear answer from Washington about where it stands on a permanent US troop presence, but hopes there will be consensus when NATO meets next month.

Ahead of that summit, Landsbergis said it was important that the world face the “looming food crisis” as a result of the war, calling it “a huge problem that’s just the beginning to reveal itself.”

“This is also where this global alliance needs to put a lot of effort,” he said.

He said he did not foresee NATO itself playing a role in providing a security corridor, but “I would not exclude the fact that maybe some of the NATO countries would take part in this, together with broader allies, with the countries who are directly affected.” by this. “

“Because if you see the list of countries who were buying food products from Ukraine, and who are now in the vulnerable position, so take Turkey, take Egypt, even Iran – and I don’t expect that Iran would be joining the effort – still there are tens of millions of people who will be in a vulnerable state, and some of them will be suffering because of the food prices and shortages. “