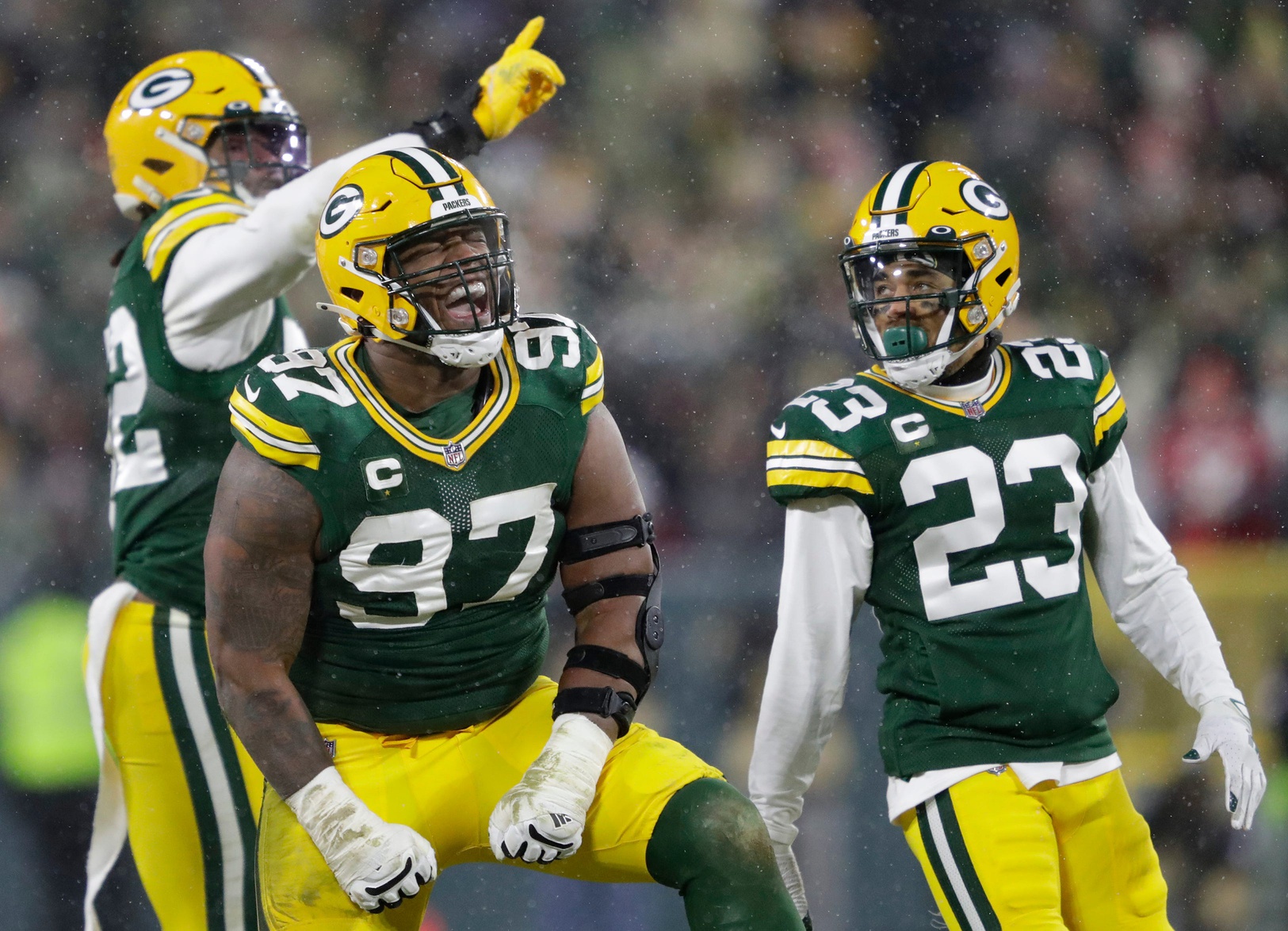 I happened to be watching NFL Network the other day. Former Packer receiver James Jones was on, raving about the Green Bay defense for the coming season. “The Packers, if they stay healthy, could well have the best defense in the NFL this year,” he gushed. It’s not an unusual take this offseason.

The perception seems to be that, since the Green Bay defense played so well in the playoff game against the 49ers, combined with the addition of two defensive players in the first round of the draft, the re-signing of Rasul Douglas and De’Vondre Campbell, and the return of Jaire Alexander, the unit should be unstoppable.

They really did play well in that post season game. They held San Francisco to 106 passing yards, 99 rushing yards, and no touchdowns. Despite the crushing loss, the performance left most Packer fans with a gleaming image of the defense. An image that gets embellished and inflated almost by the day. The green and gold faithful seem to have visions of a unit taking the field in September akin to the ’85 Bears, the Doomsday Defense, the Steel Curtain, and the Legion of Boom all rolled into one.

I really don’t mean to play Debbie Downer here, but it might be useful to do a bit of a reality check as we trudge through this long dead spot in the offseason. During the 2021 season, the defensive unit was good, but not great. Improved, but far from elite. In fact, it was like the defense played two different seasons last fall. The first ten games, during which they were solid top ten (let’s just consider that opening day disaster against the Saints to be an outliar), and the last seven games, when the quality of their play dropped off considerably.

Ironically, the decline began immediately after their best game of the season, perhaps the best in recent memory, a 17-0 shutout of Russell Wilson and the Seahawks. The next week, the Packers coughed up 34 points to the Vikings, followed by 28 to the Rams, 30 to the Bears, 30 to the Ravens, 22 to the Browns, and ended the regular season by ceding 37 to the Lions. The Packers did send in reserves in the second half of that Lions game, but the starters struggled mightily in the first half. The only quality showing in those final seven games was in week seventeen, as the Packers held an injury-decimated Vikings squad to ten points.

The Packers’ defense finished 9th in total yards, but just 14th in the most important stat, points allowed. They were 11th against the rush. 10th against the pass.

And even though the overall performance against the Niners in the playoffs was impressive, the defense did let down at the end of the game when the team needed them the most. They allowed their opponent to run off the final 3:20 of the contest on a 44 yard drive that ended with a walkoff field goal. Most disappointing was giving up a nine yard run to Deebo Samuel on a third and seven, which put the Niners in the field goal range and gave them control of the clock.

So what are we to make of where this unit stands? Which is the real Packers defense, the staunch unit of those first ten games and in the playoff? Or the shaky bunch that struggled in the last seven? Much depends on how much rookies Quay Walker and Devonte Wyatt can contribute. Few rookies, especially defensive players, make a significant impact in their first seasons. There aren’t many guys like the Cowboys’ Micah Parsons out there. But eventually the former Georgia standouts should be at least an upgrade at inside linebacker and defensive line. It may take several games for that to manifest itself, but by the December playoff push, I would expect both to have established themselves.

Alexander’s return should rejuvenate the pass defense. The edge rush position is razor thin and an injury to Rashan Gary or Preston Smith will be debilitating. Ditto at safety. Chandon Sullivan is gone and the team does not have a proven, experienced slot defender. We take it for granted that someone from the triumvirate of Alexander, Douglas and Eric Stokes can handle it, but we don’t know that for sure. Jarran Reed and Wyatt have been added to the front, but Kingsley Keke and Tyler Lancaster are gone.

Put it all together, and the plusses outnumber the minuses, but only by a little bit. Corner, inside backers and D-line should be better. Safety and edge should be about the same. Taken at face value, we can expect moderate improvement from this defense. It’s not going to be the best defense in the league. It’s likely not going to be top five. But it may hover close to that zip code. Injuries will tell the tale. If key players go down at edge or safety, the coaches will have to scramble.

Bottom line, I expect the offense will still have to win most of our games. The defense should be improved enough to keep us in them.

Ernesto Castro
9 Memorable Moments From ‘The Wendy Williams Show’
OMG! Did ‘The Kardashians’ Fake a Scene in the Finale? Why Fans Think So