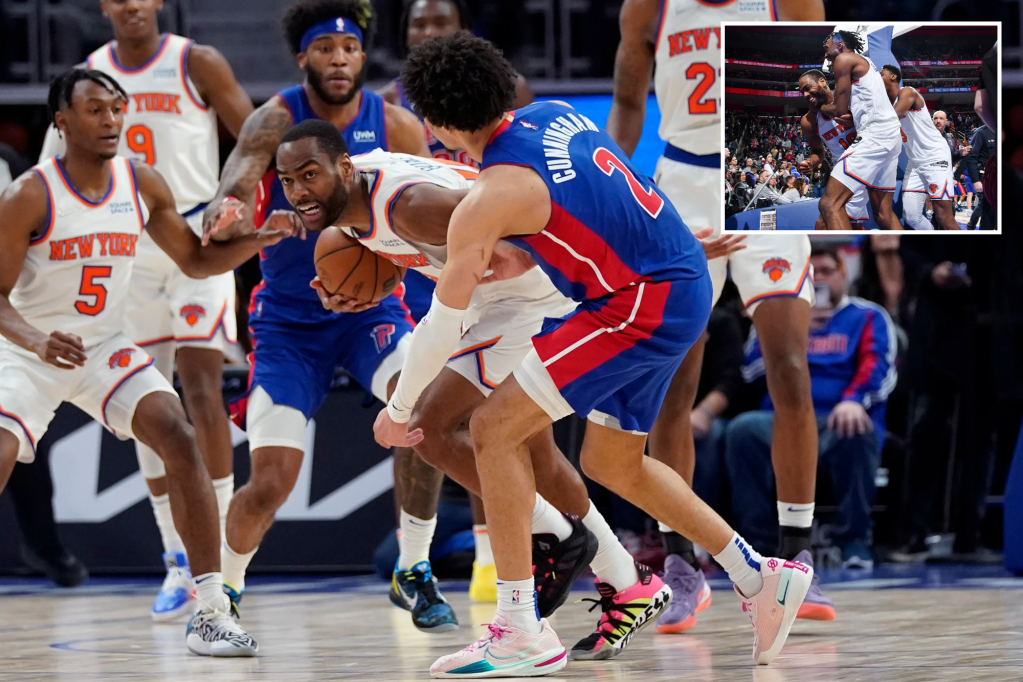 DETROIT – Plenty of Eastern teams passed the Knicks by this season. The Pistons weren’t one of them. Not yet.

Detroit has an array of promising young first-round pieces and took it down to the final possession Sunday, but the Knicks held on for a 104-102 victory at Little Caesars Arena.

They finished their road trip at 3-0, and beating a 20-55 team without top player Jerami Grant apparently felt just as good to the group as beating winning programs in Charlotte and Miami.

“It’s huge,” said head coach Tom Thibodeau. “We knew it would be a challenge. We had a really good road trip. We’ve played really hard, really well. Getting off to the start we did was huge. Playing from a lead. Then at the end we had so many guys step up. ”

Leading by one, veteran Alec Burks sank a corner 3 with 43 seconds left for the Knicks (33-42). He finished with 18 points and was then the defensive hero. The youngsters may have eked out the Miami win, but the old heads got one in Motown.

The Pistons had one last-gasp chance to tie or win it with 6.6 seconds left, down two. But rookie Cade Cunningham got stripped by Burks as he looked to shoot from the perimeter.

“He made two big plays,” said RJ Barrett, who finished with 21 points. “I guess he likes Detroit for some reason. Last time we were here, he had 34. ”

Most teams like feasting on the youthful Pistons, but they rallied from a 21-point deficit to tie the score in the fourth quarter. Then showed their greenness.

Cunningham, the No. 1 overall pick last year, lost the ball to Barrett for a breakaway layup and a 97-90 lead with 3:40 left, though the Pistons kept coming behind Marvin Bagley’s 27 points.

“We wanted to play from the lead – we thought that was important,” Thibodeau said. “And then it’s six minutes, we gotta find a way to win this game. We had a big lead. That dissipated. When you dig into how they’ve played since the [Bagley] trade or since the All-Star break, they’ve played really well. And they play hard as heck and they’re fast and they’re athletic. ”

The Knicks and Pistons will likely meet next on May 17 for the draft lottery in Chicago, where Detroit is on track to have a 51.7 percent chance of securing a top-four pick.

With the Knicks winning eight of their last 12, their top-four percentage is down to 7.2 percent.

They remained alive in their long-shot bid for the play-in, moving within 4 ¹ / ₂ games of 10th-place Atlanta with seven games to play. They return home Monday to face the Bulls.

“We’re playing winning basketball definitely since the All-Star break,” Barrett said. “We had a couple tough losses, but we were playing very well, so this was a huge road trip and just try to see if we can continue our success at home.”

Julius Randle, after missing the previous three games with a sore quad, added 20 points with a couple of big inside baskets toward the end. But Randle admitted afterward conditioning was an issue. Randle and Barrett each shot 7 of 18.

“It’s a great win,” Randle said. “Continue building what we’re doing. They don’t have a great record, but they’ve been playing really good basketball and really playing hard, so these games are never easy. ”

The Knicks built a 21-point lead in the second quarter as they heated up from 3-point land. The Pistons closed within 59-47 by halftime and started the third period on a 12-2 run, making it a game.

The Knicks got a lot of help from the officials and took advantage, shooting 29 free throws to the Pistons’ 18. The Knicks are second in the NBA in free-throw attempts.