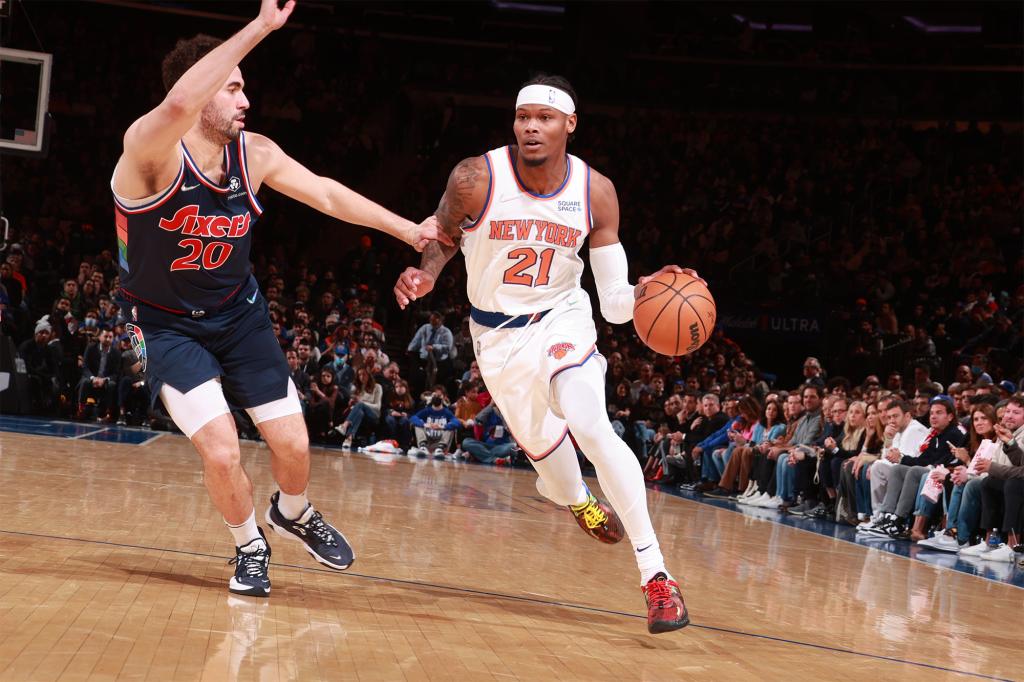 It has been two months since Knicks small forward Cam Reddish was diagnosed with a right-shoulder AC joint injury and was lost for the season after taking a spill at Sacramento on March 7.

The road back to redemption has started in Tarrytown.

According to multiple sources, Reddish has been at the Knicks’ training center over the last week and has started basketball activities, including light shooting.

Without any cap space, there is no telling what upgrades the Knicks can make to their roster. One gigantic question mark is whether the 6-foot-8, 22-year-old Reddish can make a difference with a training camp under his belt and a clean slate under coach Tom Thibodeau.

The Post previously reported Thibodeau was opposed to the Knicks acquiring Reddish from the Hawks because he didn’t see him as an upgrade to replace a player from his rotation.

The former Duke standout was no factor during his short time as a healthy Knick. He was obtained on Jan. 13 for Kevin Knox and Charlotte’s conditional first-round pick, which won’t convey this season.

“Cam has been in the gym – very consistent, very determined,” one source close to Reddish said.

When the regular season ended on April 10, Reddish was still rehabbing his right shoulder. Had he opted for surgery (which was considered) Reddish would still be off the court.

After the Hawks acceded to his request to be traded, Reddish appeared in just 15 games for the Knicks, averaging 6.1 points and 1.4 rebounds, shooting 41.5 percent overall and 25.8 percent from the 3-point range.

He only got time in Thibodeau’s rotation after multiple injuries to the team’s wings, but never mustered a true bustout game despite showing flashes in the open court. Reddish’s injury occurred when he raced back on a fast break to block a shot and tumbled hard to the court and onto his shoulder.

It was a devastating blow to Reddish’s career since it meant he would be unable to earn Thibodeau’s trust in game situations before he’s due to a rookie contract extension in October.

One of Reddish’s issues in Atlanta was that he felt he deserved a larger role as a featured player but hadn’t proved enough.

He has been injury-prone. After his lone Duke season, Reddish had surgery to a core muscle before the 2019 draft, in which Atlanta selected him 10th overall.

What’s happening on and off the Garden court

Sign up for Inside the Knicks by Marc Berman, exclusively on Sports +.

In his second season with Atlanta, in 2020-21, Reddish was limited to just 26 games because of Achilles soreness. After the Knicks traded for him, Reddish needed a two weeks to get over an ankle sprain.

Still, the promise is there that Reddish has the tools to be as good as he thinks. Reddish was not made available for comment by the Knicks after his shoulder injury and didn’t attend road trips thereafter.

Soon after he made his Knicks debut, Reddish showed his confidence by stating: “I feel like I can be a star. I feel like I could be a legit star. That’s what I’m working to be. It’s pretty simple. “

Regardless of the shoulder issue, the trade doesn’t look so horrible, especially if the heavily protected Charlotte pick doesn’t convey in 2023 either. Meanwhile, Knox didn’t do anything with Atlanta to make the Knicks regret giving up on the 2022 restricted free agent.

According to NBA sources, Knox, the Knicks’ 2018 lottery pick, could return to Atlanta, but may have to sign a minimum-contract deal.

Meanwhile, some scouts have wondered about Reddish’s maturity and whether he has the unselfishness to be part of a winning program. The Knicks have a grave need for a 3-4 combo forward, especially if Julius Randle is traded.

“People want to see him succeed but people have given up on him for a reason. You can seduce someone with potential for so long. After a while, that person has to be productive. “

The time for that is now.