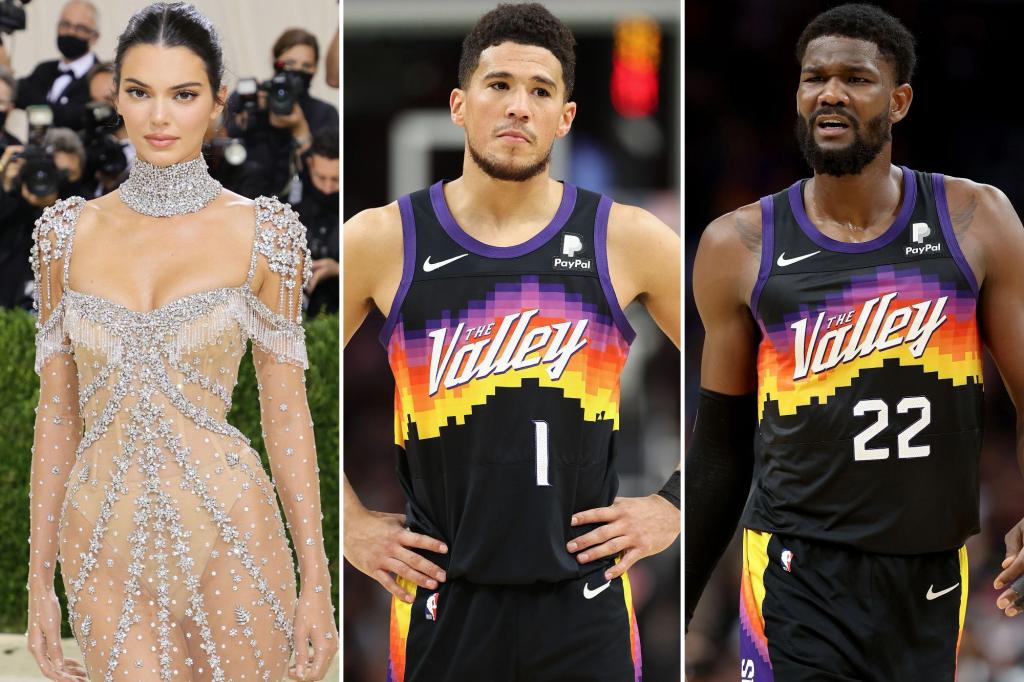 Devin Booker is having a week.

The Phoenix Suns star, 25, put on a brave face Wednesday at JaVale McGee’s Juglife charity softball game amid reports that he and girlfriend Kendall Jenner, 26, broke up after two years of dating.

At the same time, there is brewing speculation that the Suns’ big man, Deandre Ayton, is distancing himself from the team following dismal contract talks and a disappointing finish to the season. The Suns’ offseason began in May after a blowout Game 7 loss to the Dallas Mavericks in their Western Conference semifinals series.

Ayton – who is a restricted free agent – was a no-show at McGee’s charity softball game on Thursday which featured most of his teammates, including Chris Paul, Mikal Bridges, and Torrey Craig.

Arizona Cardinals legend Larry Fitzgerald, who is a co-owner of the Suns, participated in the charity softball game, along with Cardinals wide receiver DeAndre Hopkins, who hit a home run at Chase Field in Phoenix.

A flyer advertising the event back in May initially featured Ayton in the softball lineup. However, he was removed and replaced by Suns guard Cameron Payne in an updated flyer a short time later.

Just before the flyer’s release, Ayton was benched by Phoenix coach Monty Williams in the second half of the Suns’ semifinals series loss to the Mavericks. Ayton, who is part of the Suns’ big three, alongside Booker and Paul, played just 17 minutes.

Williams told reporters “it’s internal” when asked about Ayton’s minutes following the game. Ayton, who was limited to five points and four rebounds in his final game of the season, did not speak to reporters after the loss.

According to a number of reports at the time, Ayton and Williams had a verbal spat on the sidelines and had to be separated by Suns coaches. The situation wasn’t captured by broadcast cameras.

Ayton, who was the Suns’ No. 1 pick in the 2018 NBA Draft, currently has a cap hold of 31.5 million. He was not satisfied with his contract last October when he pushed for a five-year max deal worth $ 172.5 million. Phoenix ultimately wasn’t willing to make that offer.

Ayton has been a key component in the Suns’ success over the last few seasons, helping to lead the team to the NBA Finals in 2021.