Kate Middleton showed off her A+ parenting skills when she spotted 8-year-old Elizabeth Sulkowska trying to pay tribute to Queen Elizabeth. Sulkowska arrives at the Queen’s residence in Norfolk, with a bouquet of flowers and a stuffed corgi in hand, per daily Mail, 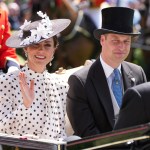 The outlet reported that Middleton approached the little girl to help her find a place to pay tribute to the Queen. She gently led him away from the crowd and searched for the best place to leave the objects at the memorial site. “I went with him to put flowers and corgis. She said, ‘Where do you think we should plant flowers?’ And I said, ‘We should put them there,'” said Sulkowska. daily Mail, You can see pictures and videos of this sweet moment here.

Middleton, Prince William, Prince Harry and Meghan Markle are all demonstrating their strength as mom and dad while speaking to young mourners across the country. On September 15, Prince William greeted a group of schoolchildren who paid a Paddington-themed tribute to the Queen. The friendly bear belongs to the royal; They had met a few months back while celebrating her Platinum Jubilee.

“Do you like Paddington?” Prince William asked him. “Did you see the skit with Paddington and my grandma? It was cool, wasn’t it?”

It was the greatest honor for Howard’s students, Mr Hill and Miss Regester, to meet The Prince of Wales @sandringham1870 Today… he mentioned about our Paddington which we built and left as a memorial to the Queen tomorrow….. #QUEEN ELIZABETH II pic.twitter.com/jAZ3xoaRAA

Markle also demonstrated her caring attitude towards all the young people who gathered for several hours to pay tribute. Earlier this week, a clip of the former royal swapping with a teenager went viral, waiting at Windsor Castle for two hours and counting.

“What is your name?” Markle asked the girl. The teenager shared that her name is Amelka, to which Meghan replied “Amelka? Oh, how beautiful… Thank you for being here; it means a lot to the family. We appreciate it.” Amelka asked for a hug and Markle so sweetly gave her a long, tight hug. Since then this moving conversation has gone viral, garnering over 3 million likes on TikTok.

It must be such a challenging time for the royal family right now, but we couldn’t be more impressed with all these thoughtful conversations they’re sharing. It seems the moments mean the world for children and teens to grieve. “It was quite a wonderful moment; I’m still trembling,” Amelka told later CNN, “I can’t really explain how he felt when he did it, but it was really cool.”

Even the royal kids love to read! Here are some of his favourites.