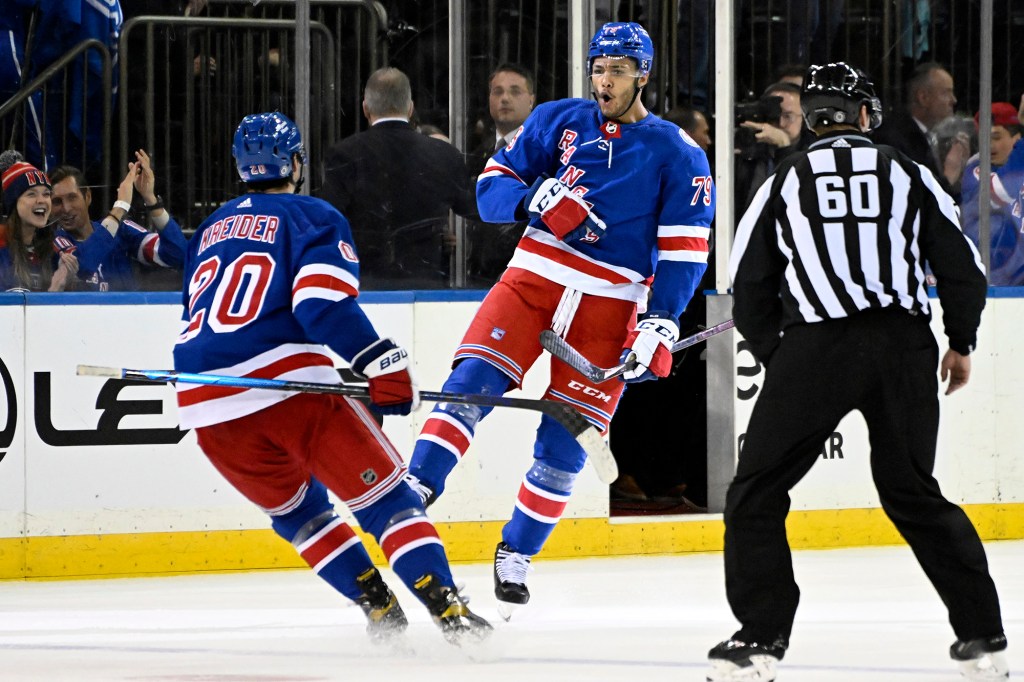 It may have been an eerily familiar collapse, but the Rangers rewrote the ending.

The Rangers came out on the right side of a 5-4 overtime win against the lowly Sabers on Sunday night at the Garden, after K’Andre Miller’s goal just over two minutes into the extra period made up for another blown lead early in the game. .

After the game was tied for a second time behind Alexis Lafreniere’s goal at 11:46 of the second period, the Rangers regained the lead just under four minutes into the final frame. Artemi Panarin put back a rebound on a Jacob Trouba shot to make it a 4-3 game.

The Sabers, who saw their previous four games go to overtime and / or a shootout, stayed in it as they have many times in the last week or so.

Post Sports + members, sign up to have Mollie Walker text you the latest word on the Rangers and reply with your thoughts and questions. Not a Sports + member yet? Try it now.

Rangers defenseman Patrik Nemeth took an ill-timed high-sticking penalty to send the Sabers on their first power play of the game. Buffalo’s Jeff Skinner capitalized on his team’s second shot of the third period to force overtime.

The Rangers played with 11 forwards for a majority of the game after Ryan Strome sustained an undisclosed lower-body injury in the first period and did not return to the bench following the first intermission. Trade-deadline acquisition Tyler Motte and Barclay Goodrow took turns filling in for Strome on the second line alongside Artemi Panarin and Andrew Copp.

Goalie Alexandar Georgiev, making his third start in the last 10 games, turned aside 13 of the 17 shots he faced in the win.

The Rangers watched a two-goal lead evaporate as quickly as it formed for the second time in three games. Buffalo made it a 2-1 game toward the end of the first period, after a pinpoint diagonal pass from Mattias Samuelsson found Rasmus Asplund all alone at the far post.

Sabers defenseman Will Butcher evened the score just over two minutes into the middle frame, cutting across the top of the circles and wiring one past Georgiev.

The Bulgarian netminder grew increasingly unsteady after that. And that led to Buffalo grabbing its first lead of the night at 6:48 of the second, when Sabers winger Kyle Okposo cut hard to the Rangers net and slid one past Georgiev.

Lafreniere, however, finally responded for the Rangers. Extending his point streak to six games, Lafreniere took a feed from Filip Chytil while cutting to the net and pulled the puck around Sabers goalie Craig Andersson for his 15th goal of the season.

A two-on-one rush with Chris Kreider prompted the Sabers’ defense to shift toward the third-highest goal scorer in the league. Instead of making the pass, Vatrano wristed it home for the 1-0 lead at 3:59.

Vatrano then jumped on a Buffalo turnover in the neutral zone before charging in for his second goal of the night. With the two goals, Vatrano now has six points in his first six games with the Rangers.