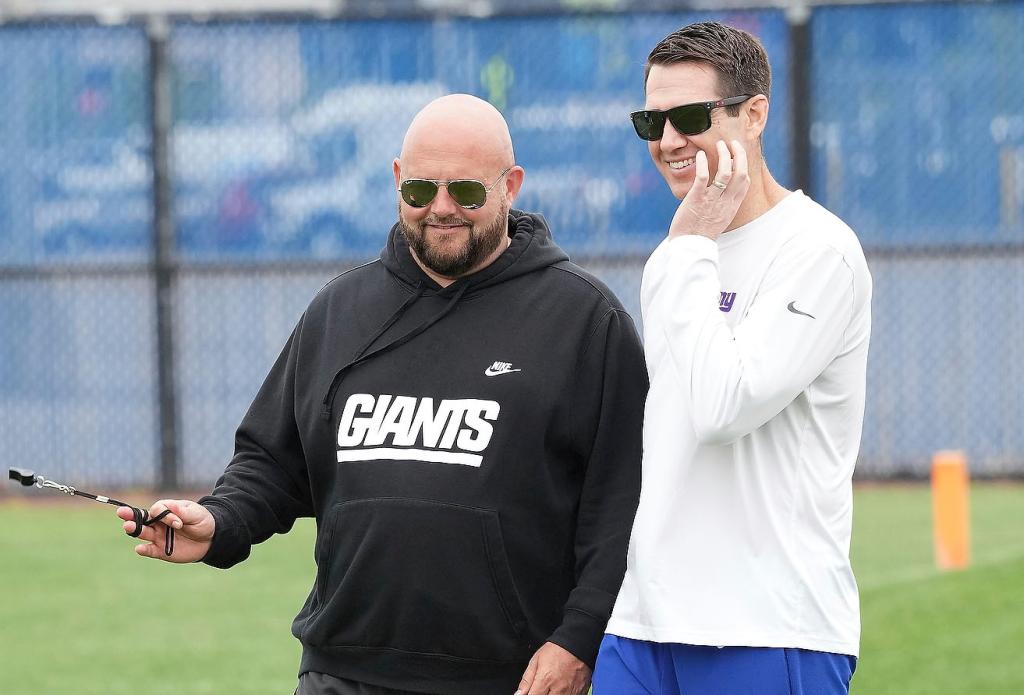 As they watch this Rangers team as addicted fans light up the Garden and capture the imagination of a championship-starved city, Brian Daboll and Joe Schoen can’t help but let their own imaginations run wild about what MetLife Stadium can one day feel like and sound like for their New York Football Giants.

A car service will pick up Schoen and Daboll at 1925 Giants Drive at 6 pm Friday for the ride to the Garden for Game 2 of the Eastern Conference Final. New pro scouting director Chris Rossetti and director of player personnel Tim McDonnell will join them.

I asked Daboll if he could one day envision MetLife being as electric as the Garden was for Game 1 against the Lightning and all the playoff games against the Penguins and Hurricanes that preceded it.

“You hope so, yeah,” Daboll told The Post. “I sit there, and I just take a look up… you see the passion… people around here love their teams. And certainly, we have a long way to go, so I don’t try to get too far ahead of myself, but you have great appreciation for what this team has done and is doing for the community. “

And what a Giants team can one day might be able to do again for its community.

“We want to do as well as we can do to give the fans what they want,” Daboll said. “We understand it’s a process, and we got a lot of work to do, but certainly a great team to watch, and the excitement and the passion that the people have in this area is pretty incredible.”

And that includes Schoen and Daboll twirling their white towels, high-fiving five or six rows up behind the net as the goal chant reverberates through the Garden. “I don’t see how those guys can’t go out and perform well with the energy that the fans bring,” Schoen said.

It is never too early, of course, for a rookie head coach to dream about fielding a dream team of his own.

“You always want to win – that’s your mindset,” Daboll said. “You want to win in everything you do. And you understand being in this business for a long time want to and actually going out there doing it are two different things. ”

The precocious Rangers are 7-0 with the new Giants regime in the stands. Rangers fans give Schoen and Daboll huge cheers when they appear on the overhead scoreboard. “Daboll’s like the Rangers mascot now,” Schoen cracked. “[Wednesday] night, I was trying to stay out of the fray. They were just on him. I don’t even think the camera guy knew who I was, and then he pointed at me and it happened to come on me so it caught me off guard (laugh). Daboll’s face of the Rangers, it seems like, right now. “

Even as a fan swept away by the pandemonium, the scout in him never goes away. “Coming from a personnel standpoint, I’m always like evaluating them as athletes,” Schoen said. “I grew up in Indiana; hockey wasn’t very big, so I’ve kind of really gotten into it the last few years. The skill, the hand-eye coordination with the puck and the stick and the change of direction, the speed… I like to look at the physicality coming from the NFL and football. I like some of the players that are physical out there. And then you see somebody like Igor [Shesterkin], he’s been amazing throughout the playoffs. Just trying to think the skill that it takes to be a goalie and put yourself in front of those pucks coming (laugh) as fast as they are from who knows where? ”

The rookie GM can see how the Rangers embody the smart, tough, dependable qualities that he and his head coach are looking for in their Giants.

“Rarely do you see them hurt themselves, at least my novice eye. … From what I’ve learned, they don’t beat themselves, they’re smart, they play well as a team, “Schoen said. “Each of their lines comes in, they’re in cohesion often times. I definitely like the style of play that they play with. “

Daboll, time and again, has gushed about how resilient the Rangers are. “Their best players are playing well,” Daboll said.

He pauses when you ask him to characterize the Rangers fan.

“Crazy in a good way… loud… seemed like they’re very passionate, love their team,” Daboll said. “It’s cool to be a fan. When you’re working in this industry, you’re so focused on your job and what you had to do, when you’re able to step out and look at another team… coach [Gerard] Gallant’s done a fabulous job with his guys. They’re gritty, they’re tough. Seems like they have a lot of different players with some different talent. Some are tough as nails, some are real skillful, some are really good goal scorers, passers. … And it’s just a team you watch and you know what? They’re not out of it.

“No matter what it is they just keep on fighting.”

He was mesmerized by the Filip Chytil goal at the end of what resembled a power play that gave the Rangers a 4-2 lead. “I was just watching Tampa… they were dead tired,” Daboll said. “And they just kept going and going and going and scrapping and keeping it in. I mean, they score, this place goes… nuts. “

Daboll hasn’t met Gallant. He did follow Rangers GM Chris Drury as a player. “It seems like they’ve built a really good culture,” Daboll said. “Every team in professional sports is gonna be different the next year. It seems like they’re just enjoying being around one another, fighting for one another, skating. … It’s a fun team to watch. “

Schoen was Dolphins director of player personnel when Gallant coached the Panthers. “The Dolphins had a home game, one of my buddies had a suite at all the Dolphins games, and his son also worked in hockey, so Gallant was in his suite, and my son was the only person to recognize Gallant in the entire suite. Of the 25 people that were in there, ”Schoen said. “They thought it was amazing at the time that a 6-year-old would recognize the head coach of the Florida Panthers.”

Daboll played hockey as a boy. He only gazed at the Cup sitting on a table in the Quest Diagnostics Training Center lobby on Wednesday.

“I didn’t touch it. I wanted to see it, and that’s it. They’re still playing in it, “Daboll said.

I asked Schoen if he and Daboll talk hockey or football on the ride to the Garden. He laughed. “Last night, we talked football. Getting out of here you would think the offseason, six o’clock you’d have everything done. Last night, we were working on emails and some staffing stuff in the car. We talked about practice [Thursday]. On the way back, it was all hockey. We were trying to watch the golf match that Josh Allen was in with Aaron Rodgers and [Tom] Brady and [Patrick] Mahomes before the hockey game. “

Daboll will be clad in his blue No. 22 jersey at Game 2, signifying 2022. Absolutely too early for MetLife to remind him of the Garden. One day, maybe.

Ernesto Castro
America’s Got Talent: Season 18? Has the NBC Series Been Cancelled or Renewed Yet?
Meghan and Harry cheered by crowds as royals arrive – all you need to know