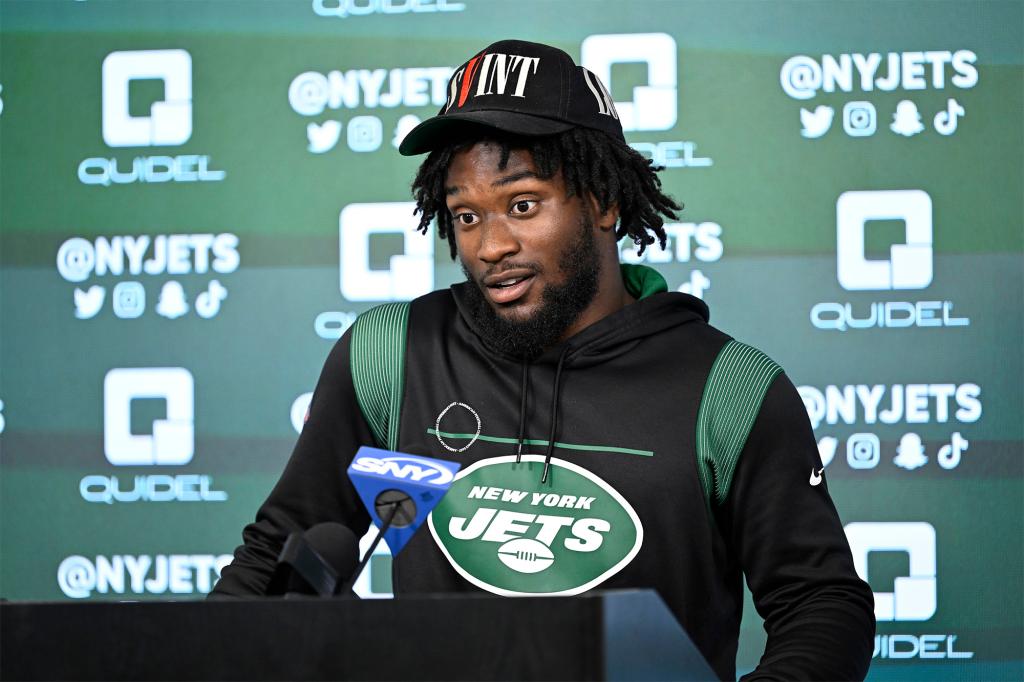 It will be a while before Jets running back Michael Carter is in the market for a new contract, but the 23-year-old already has some opinions about how backs are paid in the NFL.

“They’re underpaid, but we’ll talk about that later,” Carter said, midway into an answer on another topic this week.

When reporters revisited the subject, Carter had some interesting thoughts.

“To say that pay them as running backs, you label them as running backs, you should pay them as offensive weapons,” Carter said. “Where you’re going to give Davante Adams a $ 100 million or whatever he got [$140 million], but Aaron Jones is really doing great, too. I’m not pocket watching. He got paid, but not even half [$48 million] of what Adams got paid. Now I get there’s a market for receivers and it goes up every time someone gets signed and it goes up, goes up and goes up. But the same way they look at Tyreek Hill and the same way they look at [Stefon] Diggs and those guys are really great receivers, but Derrick Henry is a staple on his team. Jonathan Taylor is a staple on his team. Them guys deserve those big deals, too, and then from there the market can rise. “

Running backs have become viewed in the NFL as expendable and easily replaced. It has led them to fall into the NFL draft and to hesitation from teams to give them big-money deals.

“I don’t like that because I’m just going to be honest, you’re not replacing Alvin Kamara. You’re not replacing [Christian] McCaffrey right now, ”Carter said. “Not that the players behind them can’t do it because I’m friends with a lot of those guys. But the value that they add from the locker room and then… how many running backs have had a thousand and a thousand? You’ve got like McCaffrey, Marshall Faulk, Matt Forte, a few. You’re not going to just go get the next guy and expect them to do that. Dalvin Cook is not necessarily the most replaceable guy in the world right now.

Get the insider’s view on Gang Green

Sign up for Inside the Jets by Brian Costello, a weekly Sports + exclusive.

The Jets are counting on Carter to do all those things this year and if he keeps doing it, maybe Carter can land a big payday in a few years.

Carter led the Jets in rushing as a rookie last year with 639 yards on 147 carries. He proved to be tough to tackle, bouncing off defenders and showing remarkable balance. Now, he’ll have to fight for his touches after the team drafted running back Breece Hall in the second round. But Carter showed maturity in how he handled the Hall selection.

“There’s enough for all of us to eat,” Carter said this week.

Carter also corrected a reporter who only asked about him and Hall as a 1-2 punch, pointing out there are more running backs on the team who can contribute. Carter believes the Jets’ offense has great potential, but the key is everyone contributing and staying on the field and no one should be worried about how many touches they’re getting.

“But when the ball’s not in our hand, football has a life of its own. If Elijah [Moore] Gets the ball on a speed sweep and I go block for him and I do a good job blocking, the game is going to reward me for that. I’m going to get the ball soon because we’re moving the ball down the field. As long as we stay on the field, the more people can get the ball, we can do more stuff and expand our playbook. If we’re on the field for 35 plays a game, it doesn’t matter the potential we have. “