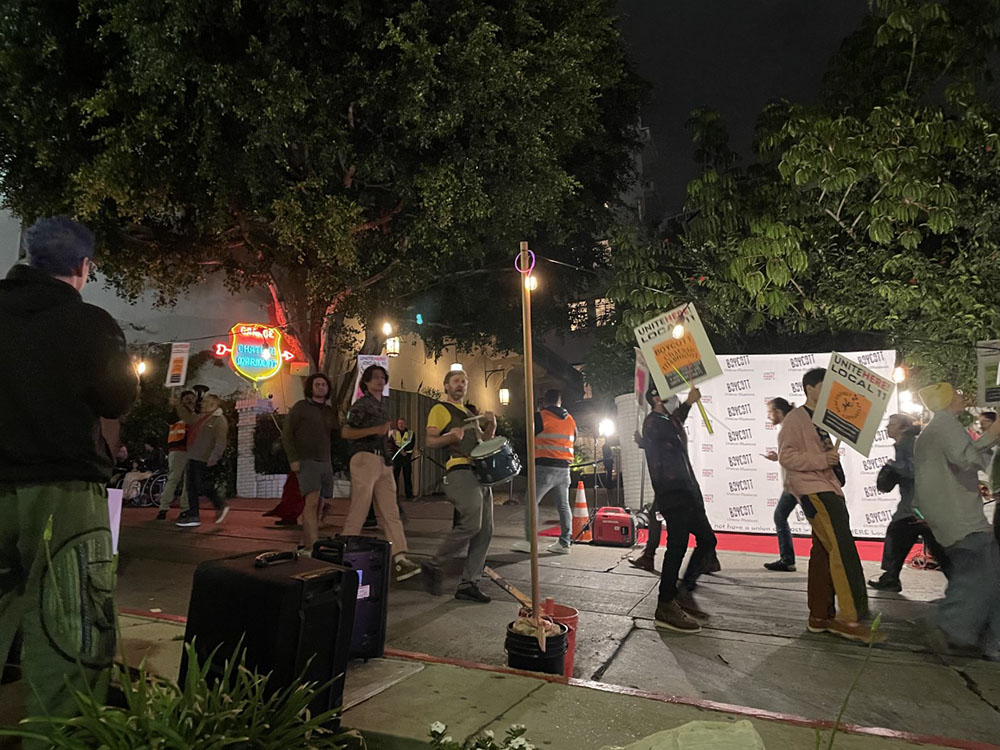 Protestors picketing Jay-Z’s Gold Party on Sunday evening, March 27, warmed up by having a party of their own. They erected a step-and-repeat at the end of the Chateau Marmont’s driveway, projected a logo reading “Boycott” in massive blade lettering across the hotel’s exterior, strung lights along Marmont Lane, donned glow sticks, led raucous chants and played disco hits. from a DJ rig.

They’d shown up after the billionaire musician had declined to move his event from the grounds of the legendary Sunset Strip property, which has been embroiled in controversy since 2020, when Chateau Marmont owner André Balazs laid off almost all of his employees at the onset. of the pandemic without providing severance packages or extended health insurance. Months later, more than 30 staffers told The Hollywood Reporter about long-simmering workplace issues, including allegations of systemic racial discrimination and sexual misconduct. The UNITE HERE Local 11 hospitality union has led a boycott of the hotel since 2021 and made public appeals for Jay-Z to respect the boycott after the Gold Party’s location was revealed.

The group of 75-plus protestors, organized by the UNITE HERE chapter, featured a mix of former Chateau Marmont employees, hotel union members, student activists and left-leaning entertainment industry workers. They initially fanned out around the perimeter of the property, looking to cover possible alternate VIP entry points, including a path through the former Chateau Hanare omakase restaurant at the east end of the property as well as a narrow walkway through the exclusive Bungalow 3 abutting Monteel. Road to the north. Early arrivals were met with shouts of “Shame on you!”

But by the 11 pm start time, activity was clustering along Sunset Boulevard, where the Gold Party’s main entrance funneled guests inside a lounge space formerly known as Bar Marmont. Private security personnel and nearly two-dozen LAPD officers cordoned off protesters behind barricades to a corner of the sidewalk abutting Selma Avenue. There, they aimed to catch the attention of the fleet of black Cadillac Escalades and GMC Yukon Denalis slowly pulling up, then idling, in the lengthy valet line.

The protestors passed out leaflets and cajoled arriving guests. A union representative said Casey Affleck, after hearing about the protest from the organizers, gave a thumbs-up and turned away from the party. A rep for the protest also said that LaKeith Stanfield told the assembled group, “I respect what you’re doing.” (It’s unclear if he later went inside.)

Not all dialogue was friendly. “I think I saw you in that straight-to-DVD movie,” one sign-carrying man yelled at a scowling woman in a gown. A tuxedoed passenger in one Escalade rolled down his window, paused a beat with a smile for his expectant audience, and then shouted – seemingly to mock the notion of appealing to the moral character of revelers like himself – “I sell drugs to children!”

At 1 am, the protestors called it quits, satisfied that, as one man with a megaphone jubilantly explained to the crowd, “We sent a powerful message to the wealthy people in Hollywood.” A paparazzo with Fame Pictures snapped away, nodding.

The party went on despite the protest. Janelle Monáe and Saweetie soon arrived. They were joined by, among others, Emily Ratajkowski, Daniel Kaluuya, Kim Kardashian, Timothée Chalamet, Rosario Dawson, Michael B. Jordan, Mindy Kaling, Tiffany Haddish, Tyler Perry, Kodi Smit-McPhee and Zoe Kravitz. Questlove was inside spinning “Smells Like Teen Spirit,” as his best documentary Oscar – which he’d won earlier in the night for Summer of Soul – stood sentinel at his DJ rig, as seen on his Instagram account.

Outside, former Chateau Marmont employee Thomasina Gross quietly observed the passing SUVs at the barricade. She’d worked the Gold Party from 2017 to 2019 as a server, when the event ran so long that staffers would hand out slippers to guests as sunrise approached. She filed a 2021 civil lawsuit, which is now in arbitration. “It feels good to be seen and heard,” Gross said. “It’s a shame that we’re on this side of the gate, but we have to make some noise to change the culture.”