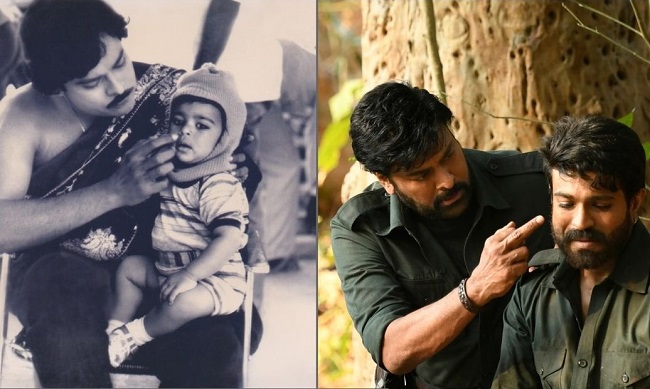 Megastar Chiranjeevi, who will soon be seen in ‘Acharya’, took to his social media profiles to wish his son and ‘RRR’ actor Ram Charan on the occasion of his birthday on Sunday.

The ‘Indra’ actor, who penned a beautiful note, also shared a special collage featuring Ram Charan and himself.

“I feel weird to wish Ram Charan on social media websites. But, I sure can share a special edited picture of Ram Charan, so that all the fans feel elated”, read Chiranjeevi’s birthday wishes.

“He makes me proud and he is my pride. #HBDRamcharan”, the ‘Sye Raa’ actor concluded.

The picture shared by Chiranjeevi has a collage in which the little Ram Charan is seen with his father on the sets of an old movie, and the latest shot from the father-son duo’s upcoming movie ‘Acharya’.

Chiranjeevi has shared these pictures, as the duo has given similar poses in two different pictures, decades apart.

On the work front, Chiranjeevi will be seen in ‘Godfather’, ‘Bholaa Shankar’, and a couple of other movies.

Ram Charan, is busy working for a heavy-budget movie under Shankar Shanmugam’s direction. Both will next appear in Koratala Siva’s ‘Acharya’, which is ready for its release soon.