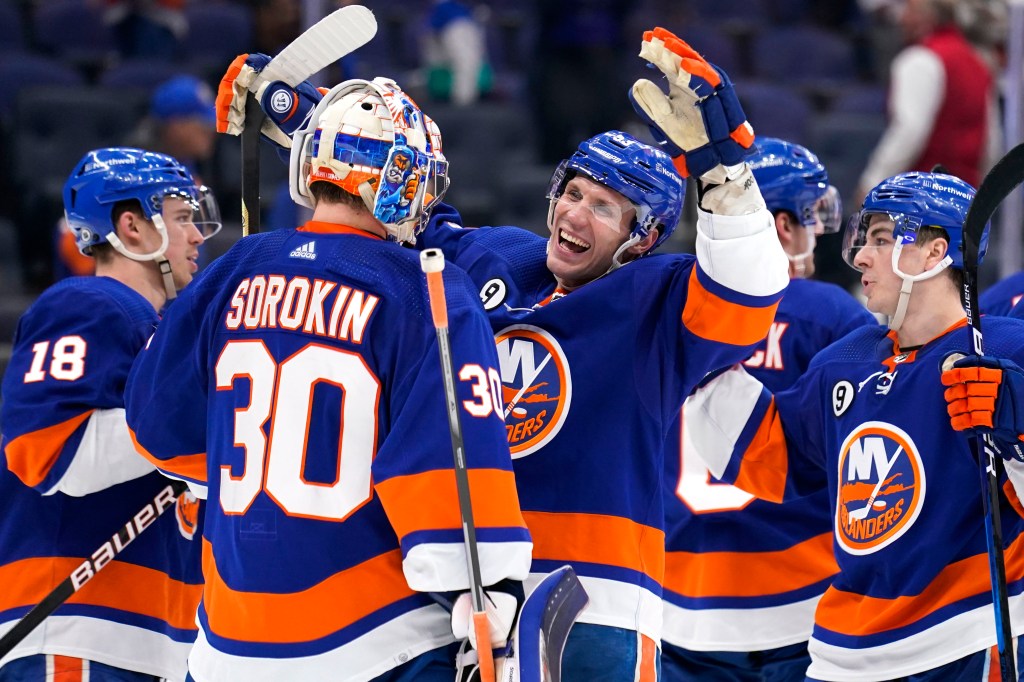 At this point in the season, the Islanders are playing with nothing to lose. Lately, they’ve looked like it, too.

And yes, they still believe it can mean something in the end.

“We’ve rattled off 13, 14-game win streaks before,” Mathew Barzal said. “We’ve got fans at home to entertain and put on a good show. I think we’ve always been a pretty good road team. “

Despite bad news early in the day, with Cal Clutterbuck and Scott Mayfield both suffering injuries, the Isles came out with energy and blitzed the Red Wings early, taking a quick lead and never looking back in a win that was as easy as could be.

The Islanders got on the board just nine seconds into the game after Anders Lee took the puck off Filip Hronek and fed Anthony Beauvillier in the slot. It was the second-fastest goal to start a game in Islanders history, behind only Bryan Trottier, who scored against the Bruins five seconds into a March 22, 1984 game.

“We’ll take that any day of the week,” said Islanders coach Barry Trotz.

Later in the period, Oliver Wahlstrom made it 2-0, also scoring from the slot after Barzal charged down the ice on the rush, creating space for Wahlstrom in the middle and feeding the winger at 16:07.

Though the shot margin told a different story, the Islanders were in control throughout. Brock Nelson made it 3-0 with a power-play goal at 11:39 of the second, and, after that, the result never felt in doubt.

The Islanders drove play and when they didn’t, Ilya Sorokin was there to clean up their messes with 37 saves. Thomas Greiss, making his return to Long Island with the Red Wings, stopped 13 of 16 shots in the other net and was pulled after the second period due to injury.

Josh Bailey provided the nail in the coffin with a goal to make it 4-0 at 1:19 of the third. The Red Wings snapped Sorokin’s shutout with two goals late in the final period, with Nelson getting his second of the game for the Islanders at 14:07 of the third.

“I think we’ve committed to one another in a sense of playing the right way and finishing this thing out strong,” Anders Lee said. “And we’re in a position where it’s, let’s just go for it and see what happens.”

If they win enough, just maybe they’ll find themselves back in it.

With the Islanders playing this way, it’s a question that forces some thought.