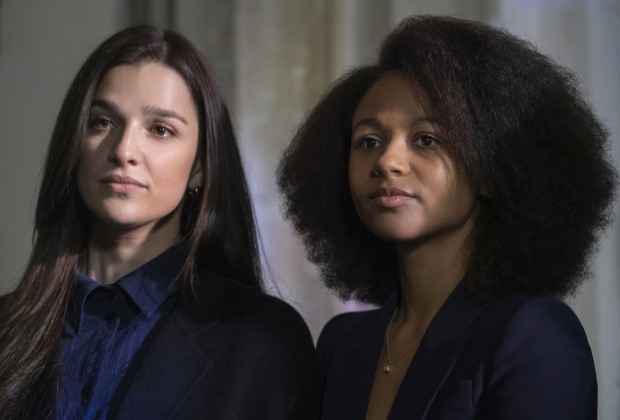 It’s been one year since Industry‘s Harper survived RIF and secured her desk at Pierpoint, but the pandemic has since shaken up the trading world. and all of the economies that surround it. However, making it out of RIF alive won’t keep her safe forever, and in Season 2, she’s going to have to hustle even harder if she plans on driving business and staying put on the floor.

The premiere picks up after the height of the pandemic, and Harper is still working from “home” (or rather, the hotel she’s currently living in). It’s there that she runs into Jesse Bloom (played by new cast member Jay Duplass), a reputable hedge fund manager who just emigrated to the UK. But the run-in isn’t merely a coincidence. She Googles his name, and we learn that he’s very skilled at what he does, having turned $28 million into $6 billion during COVID.

Meanwhile, her boss Eric is constantly urging her to return to the office. She’s invisible at home, he says, and New York is sending over an emissary that just might shake things up even further.

She arrives at the office the following morning and runs into Yasmin in the bathroom. The tension between them is thick. Harper tells her she wants them to be cordial and not let their issues affect their work. “We don’t have an issue,” Yasmin replies coldly. (Uhh, clearly they do!)

At a big meeting, the New York rep introduces himself as Daniel Van Deventer. Higher-up William Adler (appearing via Zoom) and Daniel say that everyone can protect him-or herself by staying productive and maintaining their relationships. “Your worth to the firm is who you know outside the firm, and how those relationships are monetized,” says Adler. A frustrated Eric hears enough and storms out of the meeting.

Robert is revealed to be on Eric’s desk, but Eric has noticed he hasn’t made a single outgoing call since he’s been back. Eric instructs him to go to his client list and call the least active client, ASAP. He then tells Harper to jump on one of Yasmin’s foreign exchange calls to communicate that she’s “a more sophisticated touchpoint” for the offer. Considering the women’s relationship, this could get awkward fast. Harper does as she’s told and begins her spiel, but stops talking on the call. Whether she lost her train of thought or felt uncomfortable stepping on Yas’ toes remains to be seen. (Maybe it’s a bit of both?)

After getting into a spat with Rishi, Eric tells Harper to leave her desk. Over a cigarette, he tells her he doesn’t think she’s taking care of herself. The person he’s been talking to over Zoom isn’t the person he hired. She’s gotten sloppy, he says, and there’s no substitute for being up in a client’s face. She has to live it. Be the Harper he knows she is. “You need to work on your f–king anger,” he tells her. His advice seems to fall on deaf ears. At the end of the day, he tells her to use the firm’s in-house service to help her mental health. She accuses him of covering his ass, but quickly apologizes for the outburst.

Yasmin goes to a party thrown by Maxim Alonso, who tells her his fund is no more — which means she’s lost her largest client. While there, she makes friends with Celeste Pacquet, a woman she mistakes for a sex worker only to realize she’s actually a managing director at Pierpoint who focuses on high-wealth management for individuals. Easy mistake! The two women hit it off and by the end of the night, Yas gets Celeste’s card and later, sleeps with her former client. Not bad for a night out.

Meanwhile, Robert has a one night stand, only this time, he’s sober. Guess he’s made a huge life change in between seasons.

Harper meets Jesse at her hotel’s bar. The two seem to hit it off, but don’t talk shop… yet. The next day, Harper asks Eric what he knows about Bloom, whom he calls “Mr. COVID.” They speculate that Bloom paid $30 million or so to a competing firm in premiums. “Imagine if that had been you,” she says. Harper’s gonna secure that bag, isn’t she? 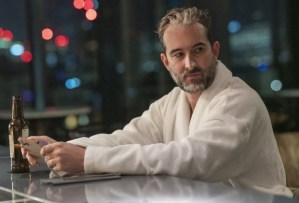 Danny tells Eric and his team that the upcoming merger could be cause for concern for the London office, hence, why Adler is pushing them to produce, produce, produce. One office is bound to close. Could be New York, could be London, Danny warns. It seems like he’ll enjoy toying with everyone’s fate in the meantime. Harper brings up Bloom, but despite the fact that he’s in London, no one really knows where he is. Except for her, of course.

New grad Venetia seems to be having an easy time at Pierpoint, which irks Yas to no end. When Yas asks for a pitch, the grad asks if they can do it in 10 minutes, allowing Yas to demand it now. The idea is presented, and Yasmin takes it as an opportunity to cut the poor girl down. The bullied has become the bully!

While out for drinks to celebrate Rishi’s engagement, Harper tells Yasmin that she thought about her a lot, but the kind words ultimately lead to an argument. Yasmin calls her a black hole and a drain, causing Harper to bite back, saying that she’s not surprised Yasmin has only thought about herself, and that everything Yasmin ever had she’s taken from someone else. When Robert takes the drunken Harper back to her hotel, she slings insults his way, as well.

The next morning she wakes up to a note from Rob, telling her that hotel life isn’t for her and that she’s taking their spare room. She heads down for breakfast and Bloom tells her to join him. He tells her to cut the s–t (he knows she knows who he is) and she properly introduces herself as a Pierpoint rep. She asks him if he has representation in London yet, and he coyly dodges answering it. “Have you ever heard that joke,” she asks, “two lonely Americans meet in a bar?” “I’m watching you,” he says, as Harper smiles at him.

Meanwhile, Kenny (who has since apologized) offers Yasmin a few of his accounts, since he needs help digging out. Rather than accepting his offer, Yasmin goes to see Celeste, as Harper blows off an important meeting with Eric to go see Jesse speak.

What did you think of Industry‘s premiere? Will Harper secure Bloom’s business for Pierpoint? Grade the premiere below, then sound off in the comments.

Janice Shirey
EXPLAINER: Who was al-Zawahri — and why did US kill him?
Visiting Israel, NBA star Enes Kanter Freedom says he is ‘more motivated than ever’ to fight antisemitism