‘I Take Full Accountability For My Actions’: Kevin Hunter Had Quite A Lot To Say Instagram As He Addressed Hurting Wendy Williams 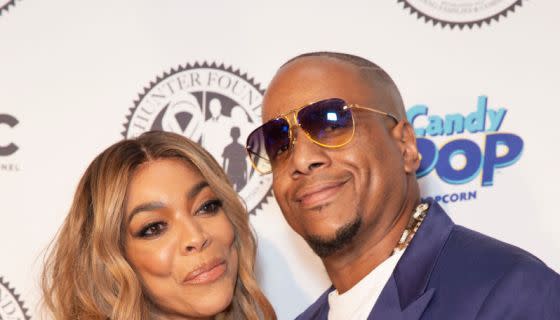 Wendy Williams’ ex-husband Kevin Hunter recently took to social media to speak out on taking accountability for his part in the demise of his marriage from the daytime TV host and her wellbeing.

“When it comes to whatever narratives that might be spun out there – regarding me, my entire family – I want to first and foremost say I truly respect all I was able to experience with my ex-wife and what we were able to accomplish, Hunter shared on Instagram on March 23.

“What she has clearly accomplished on her own and her own merit, and what were able to accomplish together,” he added.

Hunter vaguely addressed his split from Williams and his ongoing relationship with his mistress turned fiancée Sharina Hudson and acknowledged his wrongdoing and apologized.

“When it comes to my personal life [and] What the public has been able to see in real-time, I take full accountability for my actions and understand how I might have hurt a lot of people, ”the father of two expressed.

Then, assumably referencing Wendy, he continued: “I did hurt somebody, for that, I wish her nothing but the best and wellness and support.”

Hunter became an executive producer of The Wendy Williams Show in 2007.

In February, he filed a civil lawsuit in New York federal court against the show’s production company, Debmar-Mercury, and is seeking $ 7 to million 10 million in additional funds for damages.

His other child with Sharina Hudson, a daughter, was born in 2019 – leading to Williams filing for divorce.

Shortly after the daytime host submitted the paperwork, Hunter was fired from his role behind the scenes of The Wendy Williams Show. His lawsuit against Debmar-Mercury claims it was a wrongful termination.

“What happened to me as an executive in a business that does not have a lot of diversity was not called for, and I struggled whether I was going to pursue this,” Hunter said.

“I’m part of somebody else’s legacyand then I’m establishing my own legacy for both of my kids – my beautiful kids – and my current lovely situation with my partner, my friend, my confidante, ”he said later in the recording.

In the over hour-long video, Hunter additionally recalled a time Kevin Jr. Allegedly had threatened to call 911 after Williams’ team reportedly refused to let him allow “rescuers” to treat the host during a health scare.

Hunter overall emphasized that he would continue to support his son and Williams “no matter what takes place.”

We’re not quite sure what spurred his decision to hop on Instagram with all this information, but regardless, Hunter’s seemingly empathetic tone is a refreshing surpriseto say the least.

See some clips from the recording below.

RELATED CONTENT: “Wendy Williams Says Of Ex-Husband Kevin Hunter, ‘I Don’t Regret Staying With Him For All 25 Years'”