How to bet the Yankees and Mets’ World Series odds 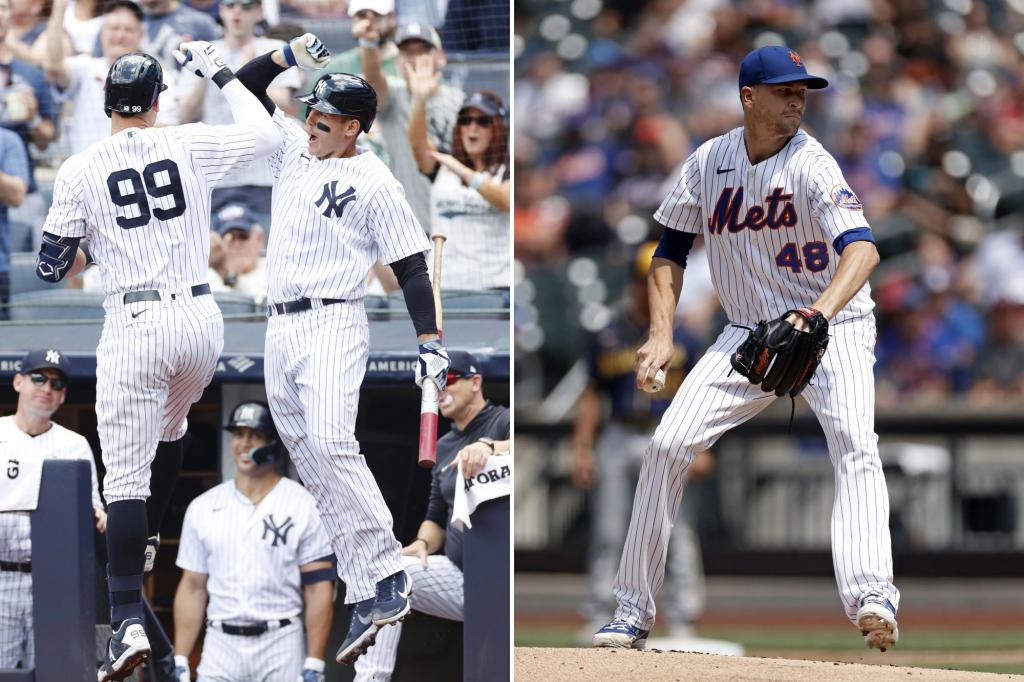 After a rough football season, New York fans are being treated to not one, but two, World Series contenders in MLB. Heading into Sunday, the Yankees and Mets are both sitting atop their divisions with a combined record of 74-34.

With their strong play over the first two months of the season, the Yankees and Mets have each seen their World Series odds shorten. The Yankees were +900 before the season but are now the second favorites behind the Los Angeles Dodgers (+450) at +600.

The Mets were +1100 in April but then saw their odds lengthen to +1400 after it was announced that ace Jacob deGrom was being shut down for at least a month with a shoulder injury. However, since then New York has raced out to an 8.5-game lead in the NL East and seen its World Series odds drop to +800 – the fourth shortest behind the Dodgers, Yankees and Houston Astros (+750).

New users only, 21 or older. Available in IA, AZ only. Full T&C apply.

Anything can happen in a 162-game baseball season, but as of early June, the chances of a Yankees-Mets Subway Series in October is a real possibility. From a betting perspective, let’s take a look at both teams and break down how bettors should attack the Yankees and Mets’ World Series odds.

Records and statistics are heading into Sunday, June 5

The Yankees were expected to be good but the Bronx Bombers have been downright dominant so far this season. New York has the best record in the American League and a 6.5-game lead in the competitive AL East.

The biggest reason for the Yankees’ early-season success has been pitching. We knew New York could smash, but the starting pitching has exceeded preseason expectations. Nestor Cortes, Gerrit Cole and Luis Severino are a combined 14-3 with a 2.41 ERA. Cortes and Cole are two of the favorites to win the American League Cy Young Award at +700.

With early injuries to the bullpen, the Yankees needed their starters to step up. Mission accomplished. Entering Sunday, New York ranked first in ERA (2.73), WHIP (1.04), batting average against (.210) and home runs allowed (38). That kind of starting pitching is tough to beat in the playoffs.

Of course, the Yankees can still score runs too. Led by MVP candidate Aaron Judge (+300), New York ranks top 15 in every major statistical offensive category other than stolen bases. Unlike previous seasons though, the Yankees are built to win games when the offense isn’t scoring a lot of runs, which makes them even more dangerous in the postseason.

One negative when analyzing the Yankees right now is they have been the beneficiary of an easy early-season schedule. New York has played the Orioles, Tigers, Royals and Rangers 26 times already this year. Those teams have a combined record of 86-125, and the Yankees have feasted off the weaker competition, going 19-7 versus those four teams.

The schedule will get tougher but it’s hard to see the Yankees’ World Series odds changing much throughout the regular season if the starting pitching stays healthy. If you want to make a bet on the Yankees to win it all, there is no risk in waiting for slightly better odds, but don’t expect to see anything over +800. This team is just too good.

Check out the best sports betting sites and apps

The Mets’ preseason World Series odds are always too short because they are a major-market team that draws a lot of money from casual bettors.

This year looked to be par for the course. New York was +1100 to win the World Series before the start of the season but it turns out, that was a great price for a team that has the most wins in the National League as of June 5.

It can be argued that the Mets are the most well-balanced team in MLB two months into the season. Offensively, New York ranks first in batting average (.265), first in on-base percentage (.335), first in hits per game (9.0) and third in runs scored (5.1). The pitching has also been impressive, ranking seventh in ERA (3.59), eighth in WHIP (1.18) and fifth in runs allowed (3.7).

The scary thing about the Mets is their starting pitching should get even better once deGrom and Max Scherzer return. DeGrom has started throwing bullpen sessions and Scherzer hasn’t pitched since May 18 with an oblique strain, but both are expected to return by the All-Star break.

It’s hard to predict if both guys can stay healthy for the rest of the season but getting two of the top pitchers in MLB back is obviously a huge boost to an already strong starting rotation.

I actually think there is still value on the Mets to win the World Series at +800. At worst, this is the second-best team in the NL behind the Dodgers. Looking ahead to the postseason, the way to beat Los Angeles is with good starting pitching.

If deGrom and Scherzer are both healthy in September, I’d make the Mets the favorites to win the World Series. Grab +800 now.