How Does Doctor Strange 2 Fare as a WandaVision Sequel? Grade It!

Home /TV Series/How Does Doctor Strange 2 Fare as a WandaVision Sequel? Grade It! 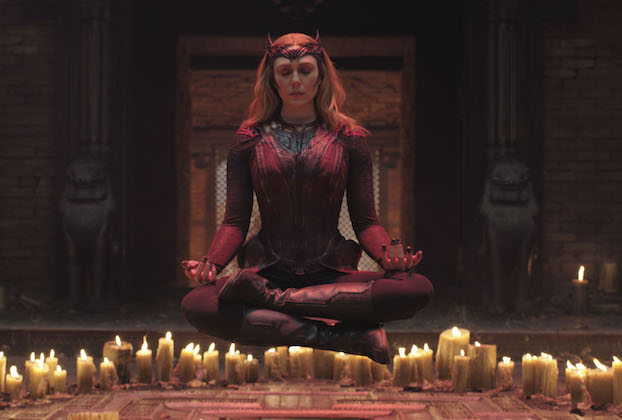 The following contains major spoilers from both Disney + ‘s WandaVision and the motion picture Doctor Strange in the Multiverse of Madness (now in theaters).

This Mother’s Day, what better (?) Occasion to take stock of Wanda Maximoff’s ongoing post-Endgame journey which was the focus of the standalone Disney + series WandaVision and most recently got updated by Doctor Strange in the Multiverse of Madness.

For starters, a few words about my own journey with Doctor Strange 2. I went into a screening last Monday hoping that, mayyyyybe, there’d be a TVLine angle to write about – either a WandaVision reference (to Agatha or something), or a nod to other Disney + / MCU series. After all, the early marketing asked us to believe that Wanda would show up as an ally to Steven Strange, but possibly “act out” a bit in her Scarlet Witch persona.

Once that field of apple trees was revealed to be an illusion, though, and Wanda’s own, quite sinister interest in young America Chavez’s multiverse-hopping ability was revealed, the realization washed over me: This is a stealth, full-on WandaVision follow-up. With Wanda as the Big Bad.

In recent days, I’ve been putting superhero podcast after superhero podcast into my ears, and I was curious to hear some opine that Doctor Strange 2 did Wanda – specifically, her evolution in WandaVision – dirty. That it reduced her to simply some “mother scorned, gone mad.”

I was always of the opinion that while WandaVision ‘s final act suggested that Wanda was “OK” with letting the sons she had conjured with magic fade away, but that mid-credits scene – which revealed her to be holed away at a remote cabin, obsessively poring over the Darkhold while Billy and Tommy’s voices bleated in the background – made clear that a dark turn was ahead. And Doctor Strange 2, in my opinion, organically followed up on that. Because if we know anything (even from the MCU-adjacent) Agents of SHIELD), spending too much time with the Darkhold can drive a person mad.

Now, I will cede the point – made by some critics of Wanda’s role as the Big Bad in Doctor Strange 2 – that she did prove to be ruthlessly kill-y in pursing her agenda, laying waste to many defenders of Kamar-Taj, fixing to do harm to America and… well… doing what she did to the assorted Illuminati members. (Still #TooSoon.) That was a big step up from simply mentally imprisoning the people of Westview, NJ

Regardless your opinion of how organic Wanda’s heel turn in Doctor Strange 2 was, there is no denying that Elizabeth Olsen was next level in her performance (and looked hella good while delivering it). Ditto, Benedict Cumberbatch. And as the cameos went, seeing Hayley Atwell’s Captain Carter in the flesh (“I could do this all day”) was outstandingwhile the attempt at #JusticeForBlackBolt by way of Marvel’s Inhumans‘Anson Mount was a pretty hilarious surprise that had my theater howling.