‘He has an iron stomach’: Meet the man who put Tom Cruise in the sky for Top Gun 2 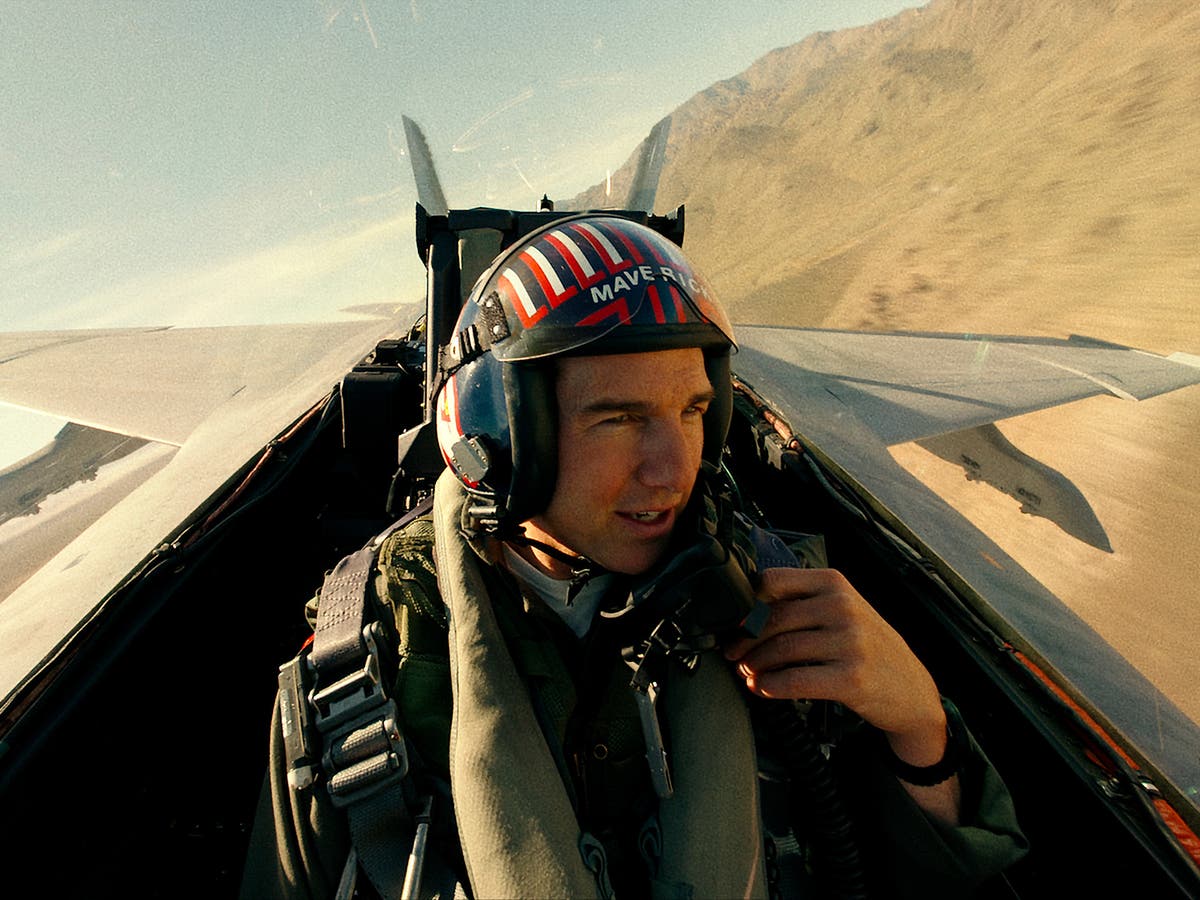 Tom Cruise is carving through a canyon at 450 miles per hour. He rears up his F-18 fighter jet, all eight Gs visible in the lines of his face, before inverting the aircraft and diving. This is just one of the exhilarating action sequences that have made Top Gun: Maverick One of the most lauded films of the year. Fans and critics alike have sung its praises, and since its release a week ago, it’s so far grossed an estimated $ 176m (£ 140m) in North America alone. It also had Cruise’s biggest opening weekend as a movie star – a maddening statistic considering his storied career.

Most importantly, though, it’s shown the continued strength of Cruise himself. While other stars turn to superhero franchises for big box office returns, here’s one man able to carry the weight of an entire blockbuster solely on his shoulders.

Cruise repeatedly touches the sky in the film, but who actually put him there? That job fell to Kevin LaRosa Jr, Top Gun: Maverick ‘s aerial coordinator and lead camera pilot. FaceTiming from his house near an airfield just north of Los Angeles, he detailed how the film pulled off its gravity-defying stunts – little of which used CGI – and what it was like being responsible for one of the most famous men on the planet. And a man who – just to add a bit more pressure to LaRosa’s job – insists on doing his own stunts.

Cruise is known for being a physical actor, preferring to jump off buildings himself rather than have someone else do it for him. He famously broke his ankle while jumping from one building to another Mission: Impossible – Fallout, after which he got up and finished the scene. While hanging onto the side of an Airbus A400 plane in Mission: Impossible – Rogue Nation, Cruise was hit in the chest by a rock. He remarked it “felt like a bullet”. “If a larger rock hit him in the chest, or smaller debris hit him in the face, then the show’s over,” director Christopher McQuarrie told New York Daily News in 2015.

It’s this kind of devotion to his craft that’s helped Cruise become an industry legend. However, with Cruise busy barrel-rolling through the sky in a fighter jet, LaRosa admits to sometimes wishing that Hollywood’s biggest star didn’t quite have to do all the work himself. “We all think that way, right? Tom absolutely does things on this movie where I’m sitting there going, ‘Oh boy, that was crazy’. “

A pilot with pedigree

LaRosa is a second-generation stunt pilot and a third-generation pilot, with a CV that includes the likes of Iron Man, The Avengers and Transformers. His father had even worked with Cruise before on Mission: Impossible III.

When he was initially offered the job on Maverick, LaRosa let out a yell so loud that he scared his own family. Initially brought on as just the camera pilot, LaRosa impressed producers so much that they promoted him to coordinator, which involved briefing the cast and crew before and after each flight. LaRosa led hours of briefings with the Navy before and after every stunt was performed. “Everything in aviation has inherent risk,” he says. “But those risks are negated with excellent briefings, risk-mitigation plans and rehearsals. We call it excellence in repetition. “

The pressure of a sequel

From the off, Cruise made it clear to the Maverick team that they were at a “disadvantage”. The original Top Gun transformed Cruise into the superstar he is today. Despite mixed critical reception, the film made over $ 350m (£ 279m) at the global box office off a $ 15m (£ 11m) budget, and, thanks in part to an inescapable soundtrack, became as synonymous with the Eighties as shell suits. “When you want to make a sequel to a movie like that Top Gunyou’re going to have all the critics, all the eyes, all the attention on you, ”LaRosa says.

Basically, they needed to hit a home run, and Cruise gave a number of speeches on set to invigorate the crew. According to LaRosa, Cruise told them: “We’re making a sequel to a very historic and iconic movie and we need to get a level of perfection with Top Gun: Maverick that has not been seen in the cinematic world before. ” LaRosa pauses – “Those are big words!” he says with a laugh.

LaRosa also helped Cruise put together the rigorous, three-month flight training program for the rest of the cast, which included being rotated underwater in an ejection seat to prepare for emergencies. “Aside from training them to be pilots, they needed to check the boxes to be able to fly in the navy aircraft and go and do the same training that those naval aviators do,” LaRosa says. Ultimately, they needed to know how to survive in the event of an emergency taking place on a fighter jet.

As for being rolled around underwater: “It’s not something you look forward to doing.” However, LaRosa added that actor Monica Barbaro (Phoenix), who previously said her training as a ballerina gave her a “high pain tolerance”, impressed the most during training. “Monica just did incredible, [she was]Really good with G-forces. “

Close enough to feel the afterburners

“It looks like you’re right there because we are literally right there,” says LaRosa. Filming in the sky, he’s the one in the camera jet, lining up the shot just “10 to 15 feet” behind the F-18s flown by Navy pilots. That means being close enough to “feel the heat from the afterburners”, or the burning fuel that comes out of the back of a jet engine.

Anyone who’s seen the movie will know that the stunts are breathtaking to watch. In one memorable scene, the Top Gun pilots must perform a death-defying slalom through a canyon at tree-scraping altitude to avoid detection by the enemy. The low-level flying, LaRosa recalls, was as real as it looks in the movie – in fact, it felt even hairier from the cockpit. “I think that’s difficult to tell just how low and fast we’re going,” says La Rosa, who adds that the pilots had “a target number of 100 feet above the trees and rocks.” “When you’re doing three, four or 500 knots through canyons, that’s up there.” He added that some Navy pilots were able to drop below that floor of 100 feet.

Unlike Marvel movies, Maverick didn’t rely on the use of CGI for its aerial stunts: “Everything was actually shooting a real aircraft.”

Due to the extreme G-forces the cast were subjected to, there was a lot of vomiting involved in filming, but LaRosa noted that actor Glen Powell (Hangman) had a knack for “handling his business” with the sick bag and carrying on. “Most people when they get air sick, you’re kind of done. You’re out for the count, ”LaRosa says.

“Glen would be in the back seat of an F-18, dogfighting and would feel it. He would take care of his business and then he’d be like, ‘Ok, let’s go!’ and he’d be right back. That’s a whole skill set, I don’t even know how you get there. “

Of course, Cruise has an “iron stomach”. “He’s in better shape than I am, mentally and physically,” LaRosa, who looks like he’s in his thirties laughs about Cruise, 59. “He’s just sharp and focused and it really makes you want to get on your A-game.”

LaRosa, who receives – like apparently everyone Cruise works with – a Christmas cake from the star every year, used the word “perfection” four times in the space of around 10 minutes while discussing Cruise’s work attitude. It’s all part of the Cruise lexicon, which has been forged by decades of anecdotes about the star’s intensity.

“Working with Tom, the best way I can put it is …” LaRosa pauses, perhaps wondering if what he’s about to say sounds a bit too much like a Cruise in-joke. “If there’s something impossible, if there’s something that can’t be done, he’s the guy who’s gonna figure out how we’re going to be able to do it. And there’s nobody better for that. “