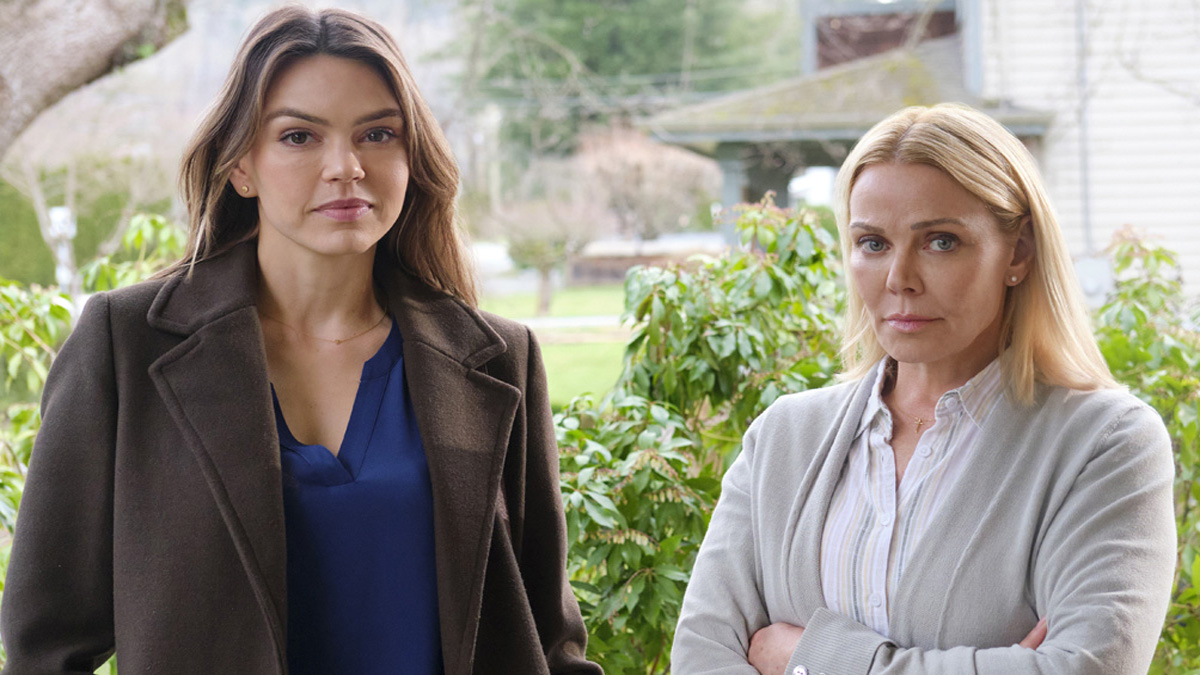 We adored Aimee Teegarden in My Christmas Family and now are given the opportunity to watch her dig deeper in the emotional new original Hallmark drama entitled Heart of the Matter.

The story is about Andie, an accomplished cardiologist who prides herself on giving her patients the best of care. But the unforeseen outcome for her patient Henry (Chandler Massey), a young man with an intellectual disability, leaves her shaken and doubting her ability as a doctor.

As she grapples with this tremendous loss, a confrontation with Henry’s angry mother Gladys (Gail O’Grady) adds to her despair and has further questioning her professional future.

Both Andie and the boy’s mom learn to overcome their sorrow through forgiveness and that acceptance can lead to hope and a brighter future. Along the way, Andie gives herself permission to find love.

Her first TV role was in Friday Night Lights, and she went on to star in Star-Crossed, The Ranch, Punk’d, CSI: Miami, and CSI: Crime Scene Investigation, in addition to several heart-felt Hallmark movies.

Read on to hear more about Aimee Teegarden’s brilliant Hallmark career, her first TV role on Friday Night Lights, and her bright future.

I have to tell you before we start, my friends and I watched My Christmas Family Tree several times. It made us laugh, cry and hug at the end; it was so sweet

Aimee Teegarden: Aw, thank you so much.

This was a very sad movie. What attracted you to it and your doctor’s character?

I think this project definitely has some heavier scenes than I think people have come to expect out of some of these Hallmark movies, but I think that the film handles some of these scenes with a lot of grace and authenticity. Also, there’s a huge heart to this film, and that’s sort of what attracted me to it.

How did you identify with tough times in your own life and maybe look at things where you had regrets or you didn’t have regrets? Because those are the two themes that I guess I kept coming up with.

Yeah, I think there’s a lot that you have to experience in your own life that ends up being brought to your class as an actor. My mother actually had a heart attack five years ago and ended up dying as a result of that. So, some of the scenes in the hospital and conversations around the cardiology side of it were definitely a little déjà vu. And so, there’s definitely a lot of personal things I feel like I bring to every character, and it’s really just finding those threads that you identify and to pull from your own life that sort of resonates for me with my work.

Had you worked with Gail O’Grady before? I last spoke to her when she was on the TV show American Dreams in 2005. What was it like working with her?

We hadn’t worked together before this and she was great. Obviously, our characters have a lot of real heavy scenes together, so the days when Gail and I were on set were definitely a lot. They were definitely by the end quite emotionally spent, but I feel like the work that we did together really paid off.

Did you and Gail talk about working together again?

I don’t know if we talked about working together again, but we recently did some other press stuff together and reminisced about how we bonded over some of the heavier scenes that we were able to get through together. It was really sticking to our guns and grounding it in honesty.

As the mom of a special needs teenager some of the choices the mom made in giving her son so much independence concerned me.

Yeah, and that’s the thing I think is unique about this movie is that it doesn’t tell you how to feel or how to take it. There are so many sides to the decisions we make and the outcomes, and I think a mother at any point, letting their kids fly and do their own thing, it’s not easy. I think with my character, she’s dealing with the checks and the double checks, and however prepared you can be to navigate outcomes of medical diagnosis and things like that, you can never fully prepare for how things are really going to go.

I feel that a few different things said by the mom or the doctor could have had a different end result.

Yeah. There are definitely the elements of the “shoulda, coulda, woulda.” I personally have had deaths recently in my family, and you replay the things that you feel like you should have said, or the doctors that you should have told, or the things that you will always second guess and question. And that’s a little bit what this film is getting at, that there’s so much that goes on with dealing with the grief of the death of someone that you love, that there is also an opportunity to really work through that and really find the grace at the moment.

Did you learn anything about either doctoring overall or cardiac medicine in particular?

We had a really lovely cardiologist who came to set when we were doing all of the procedure days. We had an RN who was also there during our hospital staff. My actual real-life cousin is an RN, and so she was in California and we were in Vancouver, so there were definitely some phone calls, hot tweets, and texts to her asking, ‘Is this correct?’ and really trying to make this as authentic as possible that you can in a movie. So, there were definitely a few things I learned along the way.

You’re not going to quit acting and go to medical school, I take it?

I mean, as thrilling as I feel like being a doctor they are, yeah, just truly just a whole other playing field of the amount of schooling and the number of hours and all of the things they do. It’s amazing.

I know you’ve been in Hallmark movies for a while like Christmas Family Tree, the most recent. What do you love about Hallmark?

So, when you watch Hallmark movies, especially the Christmas ones, where are you physically located, who are you watching with?

Where am I? Oh gosh, I feel like Hallmark Christmas films have become very synonymous with the holiday season. My grandmother, who just recently died in January, was the biggest Hallmark fan. So, every time a new Hallmark movie would come out, we’d watch it or she would give me a play-by-play of all of the things. Yeah, she was my number one Hallmark fan and PR rep for sure. But also, since I’ve been in a few Hallmark films, it’s lovely to be able to watch a film and see people that I’ve worked with or friends that I have, which is always quite fun and lovely.

And what kind of snacks are you having?

Oh gosh, at the moment I feel like I’ve been watching Hallmark films, something crunchy and chocolatey.

What do you remember about Friday Night Lights? That’s a favorite show of my sister and my nephew who was playing high school football at the time.

Yeah, that show went for five seasons and it was during my formative years. Just such a really great, wonderful experience, on-the-job training I would say for my career. And just really gave me a foundation for my career, how I work, and figuring out a character, and really just working with some amazingly talented actors and writers and directors. My only regret of that whole project was not buying property in Austin, Texas. That would have been great.

What advice do you have for a teenager or young woman who watches you and enjoys what you do, and if she had the chance to say, how do I succeed in a tough business?

I think as a good general rule of any business or any kind of career that you’re interested in pursuing is really trying to get some hands-on training. Whether it’s in the movie or TV industry, getting involved in a musical theater program, taking classes, or connecting online. I think in general it’s really just about finding something that you’re passionate about and that you can pursue, and really figuring out why you love it.

So why overall, without giving anything away, should my readers see your new movie?

I think this movie has so much heart to it, and I really hope that after watching this film it opens up some dialogue and conversations to be had. While there are heavier scenes in it, I think this really is a movie that shows the importance of forgiveness and connection not just with other people but finding it within ourselves.

What do you want to do next?

I think it really just depends. It’s about reading scripts and finding something that really connects. For me, it’s really about character and story regardless of the genre.

Did you learn anything about yourself from this movie?

I definitely learned that I’m a lot stronger than I think I am.

The pandemic helped a lot of us find that part of ourselves.

Yeah, little by a little bit. I think if nothing else these last few years have really given us an opportunity to step up to the plate and really figure out what we’re made of.

Heart of the Matter debuts on Hallmark Movies & Mysteries Sunday, May 15, at 9 pm ET.

For more Hallmark movies please check out, Exclusive: Why Hallmark’s Brittany Bristow wants all of us to ‘Spring into Love’