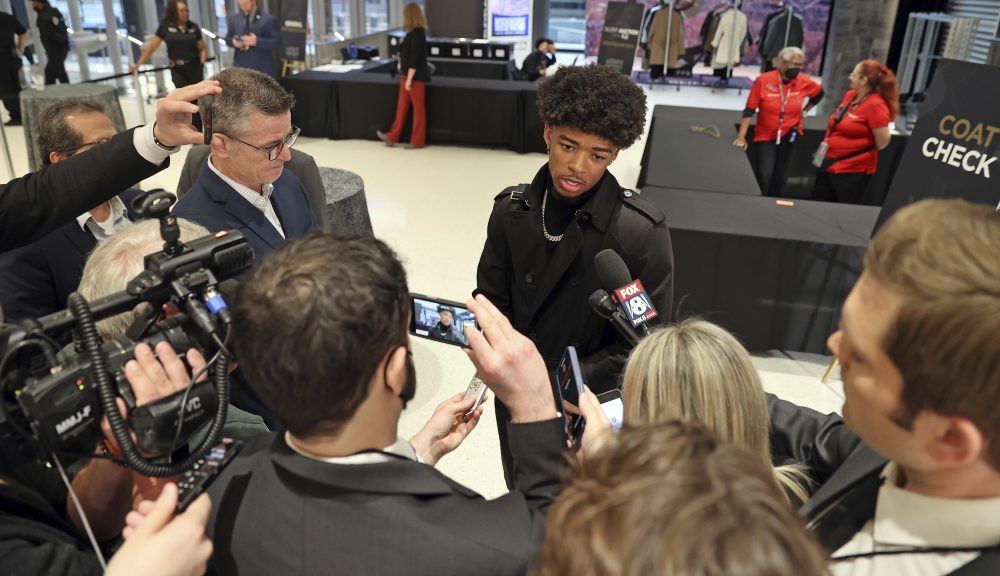 
CLEVELAND (AP) – Deshaun Watson hasn’t met his new teammates, and once he arrives there will be time for conversations, maybe even tough ones.

That’s for another day. Until then, the controversial quarterback isn’t being judged or questioned about his leadership.

“We’ve kind of just got to get a feel for him,” Browns cornerback Greg Newsome II said Wednesday night at the Greater Cleveland Sports Awards. “We don’t know him as anything as of right now, so we’ve just got to get to know him.”

Watson’s on his way. The three-time Pro Bowl quarterback, who is still facing 22 civil lawsuits from women accusing him of sexual misconduct during massage therapy sessions, was acquired last week by Cleveland in a stunning trade from the Texans.

The blockbuster deal, which included the Browns sending three first-round draft picks to the Texans, only happened after Watson initially turned the Browns down.

It caught Newsome off guard.

“It definitely came as a surprise as soon as you saw that he kind of declined us at first,” Newsome said. “We kind of thought that it was over, so definitely it was a surprise.”

While Watson’s acquisition – and his $ 230 million guaranteed contract – have been hotly discussed topics around town for several days, his name wasn’t mentioned once from the stage in Rocket Mortgage FieldHouse during the two-hour ceremony hosted by NBC’s Maria Taylor.

Watson is expected to be in Cleveland this week for a physical and introductory news conference. As of Wednesday, plans were still being finalized by the Browns, who were as stunned as anyone when Watson changed his mind and picked them over the Panthers, Falcons and Saints.

“I love his game,” said Newsome, who attended the event with Browns linebacker Jeremiah Owusu-Koramoah. “He’s a great quarterback, so I’m definitely looking forward to meeting him.”

Watson’s getting a fresh start in Cleveland, a sports-crazed city where football comes first – and often second.

His legal issues are ample, complex and it could be some time before they are resolved. Watson spent the past two days giving depositions in Houston on some of the civil lawsuits.

Newsome chose not to address whether he’ll need to discuss the situation or clear the air with Watson.

“I mean, that’s not a comment I should make at all,” Newsome said. “I don’t know anything about it, so I’m just going to stay away from that.”

Like Newsome, former Browns quarterback Bernie Kosar is eager to meet Watson and learn more about the 26-year-old. Kosar’s been a Watson fan for a while, and even wanted the Browns to draft the former Clemson star in 2017.

Kosar remains beloved in Cleveland, where pro athletes, especially Browns players, have always been treated well. He wasn’t sure how fans would receive Watson.

“I really have been doing more of my health wellness and haven’t thought about it,” he said. “So if you got a good answer, I really am thinking about this.”

The trade for Watson also ended Baker Mayfield’s four-year run as Cleveland’s starter. The Browns are trying to trade Mayfield, but there’s not a strong market for the first overall pick in 2018 who had an injury-plagued 2021.

Kosar is confident Mayfield will have success again.

“Quarterbacks are beneficiaries of the players around us, so we do way better when we have good players around us and Baker showed he can take a team to the playoffs,” Kosar said. “We were 8-9 last year with him being hurt, playing at probably 60-65 percent.

“Baker Mayfield at 100 percent is absolutely going to be a winning quarterback again in this league.”