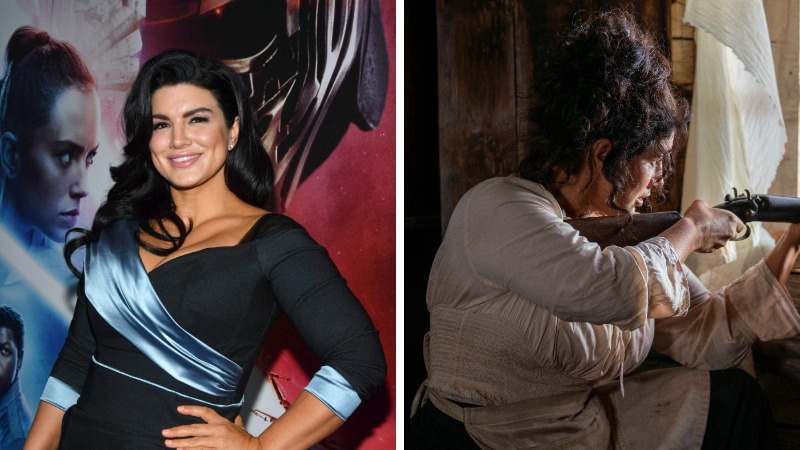 Gina Carano lost the role of a lifetime by refusing to stay silent on issues dear to her heart. Now, she’s the star of her own feature film and has the support of a new legion of fans.

“They’re listening to me because I spoke some truths and I stood for what I thought was right,” says the former “Mandalorian” standout. “I have a whole army behind me.”

The “truths” Carano spoke included skepticism over COVID-19 protocols and the need for election integrity, among other hot-button issues. Those common-sense positions put her at odds with Disney, Inc., which employed her as Cara Dune in Disney + ‘s “The Mandalorian.”

The Mouse House fired the former MMA star early last year for her social media missives, all the while ignoring other Disney stars who said far worse online (like Bette Midler, for example).

Carano spoke on the set of “Terror on the Prairie,” the first film of her Daily Wire partnership. The conservative site “uncanceled” Carano after Disney’s dismissal, letting her produce and star in the indie western featuring Nick Searcy, “Cowboy” Cerrone and comedian Tyler Fischer.

She plays a frontier woman forced to battle an outlaw gang out for blood. The film is streaming exclusively on The Daily Wire, part of the company’s push to become a right-leaning alternative to Netflix, Hulu and HBO Max.

Carano doesn’t regret her social media activity even though it costs her one of the juiciest gigs in Hollywood.

“People need to start speaking their minds… the whole reason we got into this predicament to begin with is because everyone was holding their breath,” she says of the fear-based Cancel Culture climate.

Carano grew up in an apolitical family that didn’t debate headlines or religion at the dinner table. Athletics, however, came naturally for her clan. Her father, quarterback Glenn Carano, played six seasons for the Dallas Cowboys. The young Carano played basketball, volleyball and softball before finding fame in the MMA.

Her career didn’t last long, but she still advanced the cause of female fighters in the male-dominated sport. Her final match against Cristiane Justino (Cris Cyborg) caught the eye of director Steven Soderbergh, who cast Carano in the 2011 action-thriller “Haywire.”

Carano got busy on the big screen from there, appearing in “Deadpool,” “Fast & Furious 6” and “In the Blood.” Her “Mandalorian” gig, though, catapulted her to a new level of stardom. And then she started sharing thoughts on social media which conflicted with progressive narratives.

Disney’s PR team asked her to stay silent, but she refused.

“It was placed on my heart… if it wasn’t placed on my heart I wouldn’t have said anything… if I didn’t say something I felt like I was betraying myself,” she says, adding she considered various factors before speaking up.

Carano isn’t a mother, but she heard from supporters who couldn’t publicly have her back.

“We 100 percent hear you, and I’m so sorry that happened to you, but I have children,” she recalls of some reactions to her Disney nightmare.

“What goes through my head is, ‘you should probably be speaking more than me.’ By not speaking and believing that you should you’re actually putting your children in a bad position. They’re gonna have to fight a much tougher battle, “she says.

For “Terror,” Carano worked alongside MMA star Cerrone and Gabriel Kane Day Lewis, son of multiple Oscar winner Daniel Day-Lewis. She also had to “untrain” herself on holding a gun the right way, betraying the muscle memory she brought to the project.

“No, that’s too modern,” she said of her thinking during the shoot. Her character isn’t a fighter, but that changes as the story progresses.

“I was never an action person. ‘Pride and Prejudice,’ ‘Anne of Green Gables.’ I love that stuff, ”she says.

Carano drew plenty of detractors during her Disney struggles. Hollywood feminists stood down rather than rally to her side. Many journalists misinterpreted her social media messages or simply nodded along as Disney crushed her “Mandalorian” career. And the hate she receives on social media proved relentless.

Her message to critics?

“I would check your heart. I’m not the person the headlines painted me as… I guarantee you, if you heard my story and sat down with me, you might wanna check where that ugliness, and that hurt, of seeing someone’s life, attempting to destroy someone’s life, comes from ”she says. “I don’t want anything bad for these people that I think are completely misguided. They’re gonna have to live with themselves. In a couple of years they’re gonna look back and think, ‘I was that person.’

Children think there are no consequences from bullying people online. Sorry kids, but that s *** comes back around… and that’s sad, ”she adds.

Carano was one of the original people who pushed back at Cancel Culture, knowing it could cost her a once-in-a-lifetime job and maybe even her film career. In recent months, we’ve seen comedians like Dave Chappelle and Ricky Gervais stare down the woke mob and live to tell the tale.

Even a woke platform like Netflix has taken a stand for free expression, a trend that bodes well for artists moving forward.

“Now, I feel like we may not be part of the minority group of people,” she says. “We might have a majority group. I don’t think that the powers that be, the major news networks, I don’t think they want everyone to know that. “