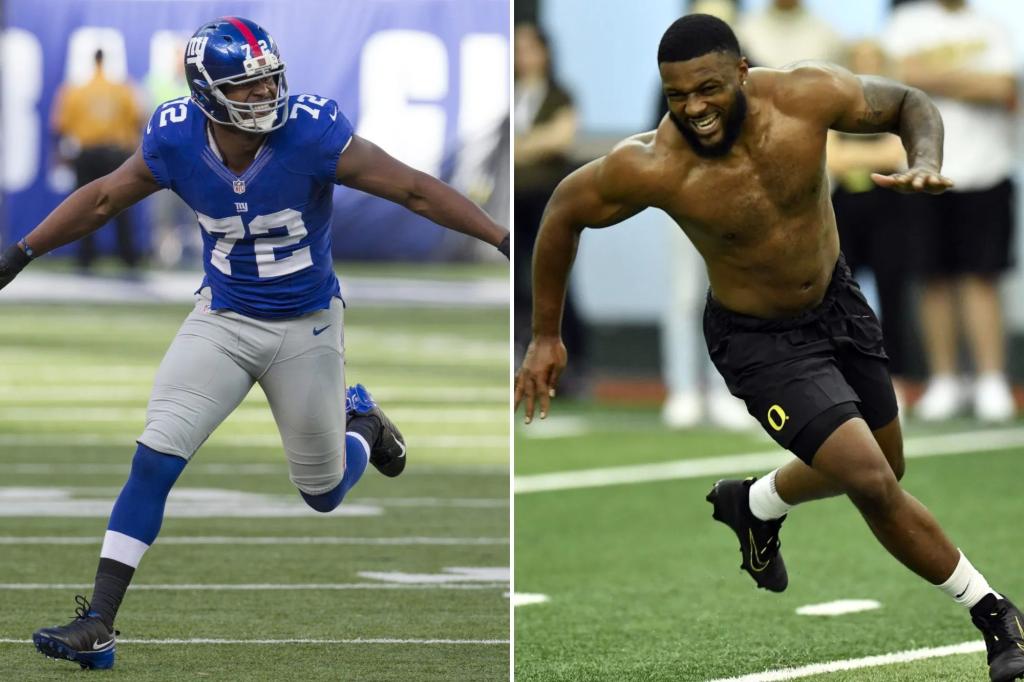 This was the postulate presented to the listener on the other end of the phone line: Of all the diverse and gifted pass rushers the Giants drafted, cultivated and unleashed on the opposing quarterback in the era of the two most recent Super Bowls, the newest entry , Kayvon Thibodeaux, most resembles Osi Umenyiora.

In one quick synopsis, Umenyiora harkened back to a time that almost feels prehistoric, compared with the malaise that has taken hold of the franchise for the past five years. He played during an age when pass-rush monsters roamed the Meadowlands turf. Michael Strahan. Umenyiora. Justin Tuck. Mathias Kiwanuka. Jason Pierre-Paul. Different styles, varied strengths, a shared bond of winning games and wreaking havoc.

Will Thibodeau follow this lineage and usher in the next wave of edge rushers? Will he and Azeez Ojulari, coming off a promising eight-sack rookie season, play off each other and meet at the quarterback the way Strahan, Umenyiora, Tuck, Kiwanuka and Pierre-Paul convened in such devastatingly effective fashion?

“I like him as a player for sure,” said Umenyiora. “Very dynamic football player. He’s strong against the run, which for a college pass rusher of his caliber, you don’t really see that. Strong, quick first step, good bend around the edge, good pass-rush moves, good speed, good motor.

“The way he plays, the way he rushes the passer I think you would say he has a very similar game and a very similar skill set to what I did, for sure. I like him as a player, I do. ”

There is much to like. More to like with Thibodeaux, the No. 5 pick in the NFL draft, than there was when Umenyiora was selected by the Giants in 2003 in the second round, at No. 56 overall.

“We wanted this guy so bad that we kind of singled him out,” said Ernie Accorsi, the general manager at the time.

“This guy can run, this guy can fly off the edge and he’s not a little guy, these kids got some size,” said Jerry Reese, who ran the draft for the Giants until he replaced Accorsi in 2007.

The speed, quickness and first step off the line is what attracted the Giants to Umenyiora. Thibodeaux is cut from the same mold. Entering the NFL, he is a more refined version, though, having played at a higher level in college (Oregon) than Umenyiora (Troy State).

Born in London and raised for seven years in Nigeria, Umenyiora came to the Giants with a far lower profile than Thibodeaux, the South Central Los Angeles product, a mega high school and college star residing in the spotlight for several years. His personality is outsized. Umenyiora, who had 85 career NFL sacks – 75 in nine seasons with the Giants – is currently a BBC Sport media pundit. He learned to grow comfortable in the New York market. Thibodeaux seems ready-made for it.

Is he, as the Giants wondered in the early stages of the pre-draft process, almost too ready for all the off-the-field hubbub? Is Thibodeaux so interested in becoming a Strahanesque celebrity that he fails to prioritize the football greatness that Strahan achieved to launch his Q Score?

The Giants eventually concluded Thibodeaux should be able to thrive amid the glare.

“I think that works and in terms of what’s gonna work in New York, if he’s the player they drafted him to be his gonna be a superstar, right?” Umenyiora said. “I think he will, because he has everything. He’s got the look, he’s got the talk, he’s got the game – college game, anyway – to back it up.

Strahan has a mentorship connection with Thibodeaux and Strahan’s advice – keep the main thing the main thing – has already been parroted by Thibodeaux. This can be easier said than done for a 21-year-old with stars in his eyes.

Thibodeaux admits he knows little of the Giants’ pass-rush legacy he is tasked with rebirthing.

“I would say that’s really the only thing I’m ignorant to, when it comes to my football history,” Thibodeaux said. “So I will be picking it up. I have to do some research before I get in front of all these cameras. ”

Soon enough, Thibodeaux will be front and center, on the field and within range of all those cameras. He will learn what it means to win big or lose with regularity in New York.

Umenyiora knows all about this. He was not even a full-time starter for the team that won Super Bowl XLVI after the 2011 season and yet he got paid by Nike, Verizon and 5-Hour Energy to appear in three separate commercials.

“Nothing like it,” said Umenyiora. “That’s crazy, but that’s because of the market I was in. You got to be able to take advantage of that. ”

The advice Umenyiora gives Thibodeaux now is different from counsel he would have provided during his playing days.

Back then, Umenyiora was wary of the media.

“My warning for him then would have been ‘You need to chill, you need to be quiet, don’t say anything, these people are coming for you,’ ‘he said.

“Just continue to do you,” said Umenyiora. “Just go out there and play ball, if you perform the way he’s supposed to perform they’re gonna treat you fair and they’re gonna love you. If you don’t perform, they’re gonna get on you and they’re going to teach you a lesson, because it’s the biggest media market in the world and it’s almost like everything is on steroids there, because of that market. That’s the good and the bad, just be aware of that. ”

It is all coming for Kayvon Thibodeaux, next in line for the Giants.