Gia Giudice Reveals Mom Teresa Giudice Is in the Hospital: ‘Pray for a Speedy Recovery’

Home /Celebrity/Gia Giudice Reveals Mom Teresa Giudice Is in the Hospital: ‘Pray for a Speedy Recovery’ 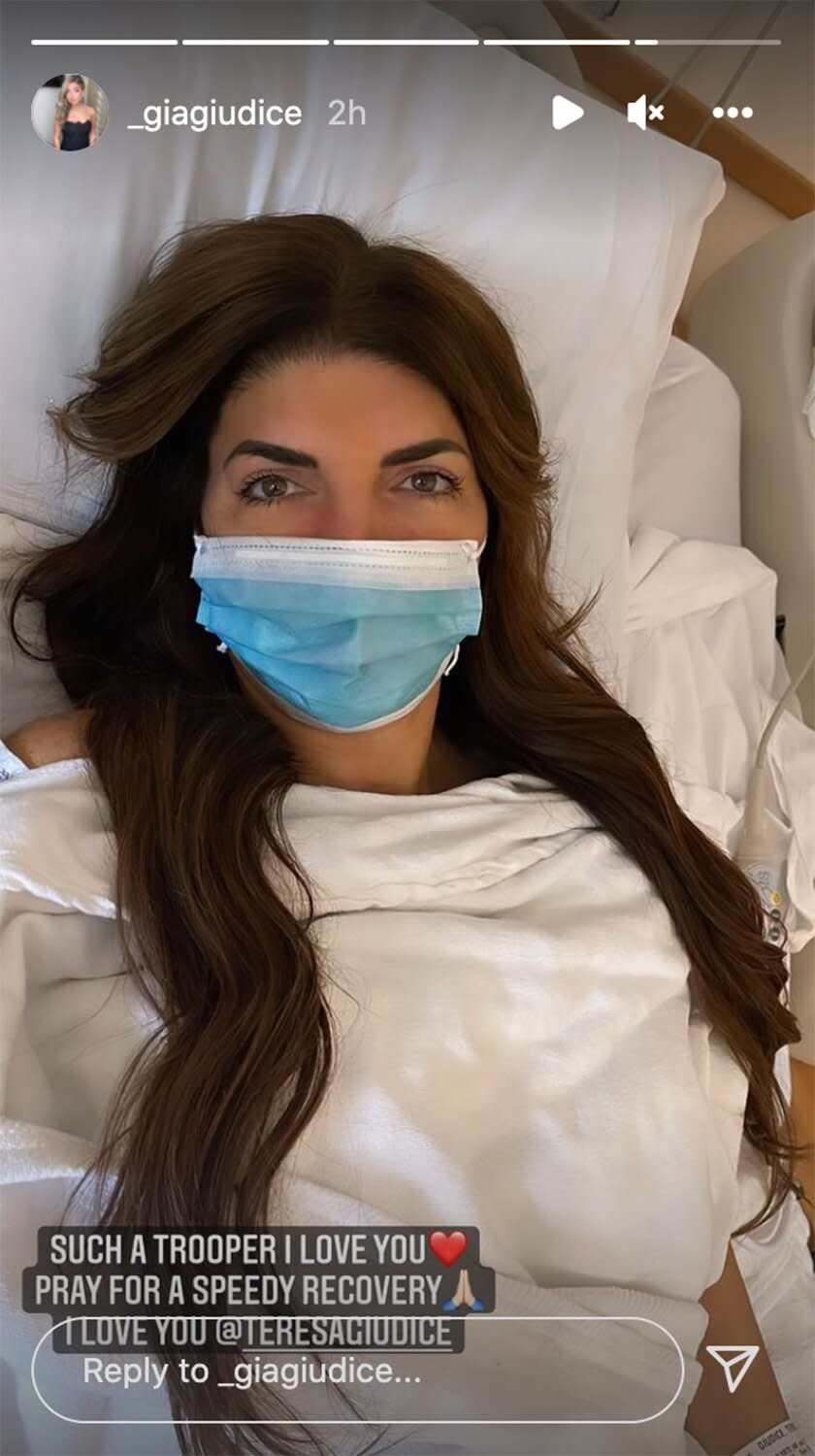 Gia Giudice is asking for prayers as her mom Teresa Giudice recovers in the hospital.

The 21-year-old daughter of The Real Housewives of New Jersey star revealed that Teresa was in the hospital on her Instagram Story Thursday.

Beside a photo of her mom laying in the hospital bed, Gia wrote, “Such a trooper, I love you. Pray for a speedy recovery. I love you @teresagiudice”

In a statement to PEOPLE, Teresa’s attorney, James J. Leonard Jr., clarified why the mother of four had been hospitalized.

“Teresa was admitted to the hospital last night and had a non-cosmetic emergency procedure this morning,” her attorney says. “She is recuperating and is looking forward to a speedy recovery. She thanks everyone for their prayers and well wishes.”

RELATED: Teresa Giudice Says ‘No One Even Noticed’ When She Got A Nose Job Earlier This Year

Though this procedure was non-cosmetic, Teresa has previously undergone several cosmetic procedures and hasn’t been afraid to talk about them.

She previously had her breasts done in 2008 while filming the first season of RHONJ, which premiered in May 2009. In January 2020, Teresa penned a lengthy Instagram post about her decision to get another breast augmentation.

“I believe it’s important to always stand strong and feel like your best most confident self,” she wrote, noting that she “could not be happier with the results.”

She continued, “I was very nervous to re-do my breasts, but I felt it was necessary for me to feel like my best self. I encourage anyone who doesn’t feel their best self to work on feeling better. Even if it is the smallest thing every day. “

Teresa also revealed on Watch What Happens Live with Andy Cohen in November that she got a nose job in February 2021 and “no one even noticed.”

The star reportedly opened up about the procedure at the New Jersey Ultimate Women’s Expo at the NJ Convention & Expo Center, explaining she got the “tip” of her nose tweaked and she was “so nervous about getting it,” according to The Sun.

RELATED: RHONJ: Teresa Storms Off After Claiming Others ‘Want to Sabotage’ Her Romance with Luis Ruelas

Teresa’s hospitalization comes a few days after the most recent episode of RHONJ, in which she continued to fiercely defend Ruelas amid growing concerns from her castmates about her alleged past. (Ruelas has denied all allegations.)

“He doesn’t have to prove himself to no one,” Teresa said during the dramatic episode. “He’s my boyfriend and I’m gonna stick up for him.”

Gia was among those who have questioned Ruelas, telling her mom in an earlier episode, “Honestly, I feel like it’s just still step-by-step … I also didn’t think it would move this fast at all.”

During a confessional, Gia added, “Do I think my mom might be moving too fast? Yeah. Any relationship you’re gonna be in the honeymoon stage for the beginning. It’s very easy to only see the good when you’re in la la land. “

Teresa later told Gia, “This is the thing: I really don’t care what people think. The other night, Margaret [Josephs] brought up unconfirmed rumors about Louie’s past … I don’t care. Bottom line: all I care about is my children, Louie, and his kids. “