France Live Updates: Macron’s Coalition Expected to Prevail, but Will Be Weakened in Parliament 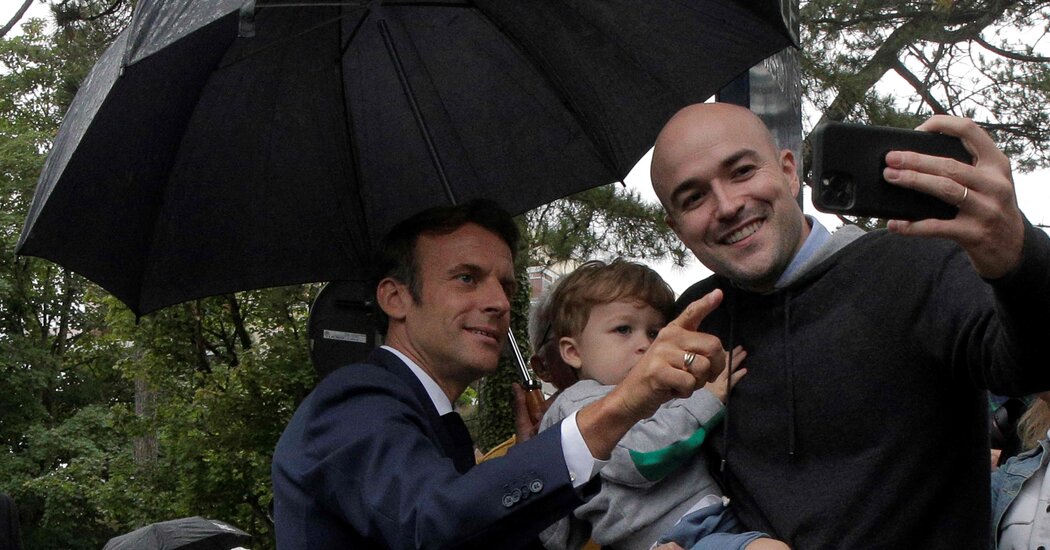 PARIS – The centrist coalition supporting President Emmanuel Macron of France was projected to come out ahead in crucial parliamentary elections on Sunday, but a strong showing by an alliance of left-wing parties and a far-right surge prevented Mr. Macron’s forces from securing an absolute majority of seats, a setback that could complicate his second term.

Projections based on preliminary vote counts Macron’s centrist coalition 205 to 250 seats in the 577-seat National Assembly, the lower and more powerful House of Parliament – more than any other political group, but less than half of all seats.

For the first time in 20 years, a newly elected president appeared to have failed to muster an absolute majority in the National Assembly, which won’t grind Mr. Macron’s domestic agenda to a halt, but will shift influence back to Parliament after a first term during which Mr. Macron’s top-down style of governing had mostly marginalized lawmakers.

In 2017, when Mr. Macron was elected for the first time, his party and its allies clinched a commanding majority of 350 seats in the lower house of Parliament, which was mostly compliant with his plans. This time, however, he will have to pay much closer attention to the balance of power in the National Assembly.

Mr. Macron’s coalition, known as Ensemble, should still be able to pass some bills. But his party, La République en Marche, will be much more dependent on its centrist allies than it was during his first term, especially to pass contentions projects like his plan to raise the legal age of retirement to 65 from 62. In some cases, Mr. Macron might even have to reach across the aisle to opposing lawmakers, most likely on the right, to secure a bill’s passage.

The vote was also marred by record-low turnout, a warning sign for Mr. Macron, who has promised to rule closer to the people for his second term. Only about 46 percent of the French electorate went to the ballot box, according to projections, the second-lowest level since 1958.

The alliance of left-wing parties, known as the Nouvelle Union Populaire ecologique et Sociale, or NUPES, and led by the leftist veteran Jean-Luc Mélenchon, was expected to get 150 to 190 seats.

That was not enough to seize control of the National Assembly and force Mr. Macron to appoint Mr. Mélenchon prime minister, as NUPES had hoped. But it was a strong showing for leftist parties that had been largely written off as hopelessly divided.

Marine Le Pen’s far-right party was also projected to secure 75 to 100 seats in the National Assembly, a record that could make it the third biggest political force in the lower house.

The alliance is dominated by France Unbowed, Mr. Mélenchon’s party, and also includes the Socialist, Green and Communist parties. It will still be the main opposition force in the National Assembly, but major policy differences among coalition members on issues like the European Union could resurface once Parliament is in session.

Lawmakers are elected for five years, and Mr. Macron will not have to contend with midterm elections over the next five years, ensuring that his majority cannot be overturned overnight.

But his party will be far more dependent on its allies to keep control. That could give more leverage to parties like Horizons, a center-right group founded by Mr. Macron’s former prime minister, oudouard Philippe, who is more of a fiscal hawk and could demand tweaks to legislation.

The far right was one of the driving forces in the presidential race, but its leader, Marine Le Pen, was convincingly defeated by Mr. Macron and then ran a lackluster campaign for the parliamentary election, although her party is still expected to secure a record number of seats.

Instead, much of the campaign has been a bruising confrontation between the leftist coalition and Mr. Macron’s forces, with both sides describing a potential victory by their opponents as an unmitigated catastrophe.

The leftist coalition has promised voters they could metaphorically “elect” Mr. Mélenchon prime minister, and he has used his oratory to galvanize left-wing voters after a disastrous presidential election in which the left was divided and largely sidelined.

Mr. Mélenchon has vowed that his coalition would make the legal retirement age 60, two years earlier than it is now, raise the monthly minimum wage to 1,500 euros, or $ 1,580, overhaul the Constitution to reduce presidential powers and phase out nuclear power.

Mr. Macron, by contrast, appeared disengaged and more preoccupied with France’s diplomatic efforts to support Ukraine in its war against Russia. Speaking on an airport tarmac before a trip to Eastern Europe that took him to Kyiv, the Ukrainian capital, this week, he had urged voters to give him a “solid majority” for the “superior interest of the nation,” but he did little campaigning himself.

Mr. Macron had also hoped to inject new life into his party’s campaign by appointing new ministers, and, for the first time in 30 years, a female prime minister, Élisabeth Borne. But his cabinet was immediately roiled by crisis, including rape accusations against a minister and an outcry over the government’s handling of a chaotic Champions League soccer final outside Paris.

Ernesto Castro
What happened when Dick’s Sporting Goods took a stand on guns
Is Obi-Wan Finale About to Give Added Oomph to a Return of the Jedi Reveal?