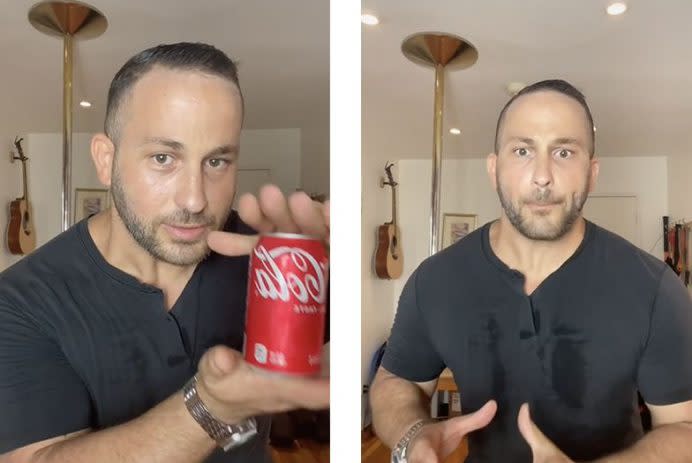 What is inflation and what causes it?

Cappola is a fitness coach and content creator who posts clips featuring fitness tips and tricks while dispelling the occasional diet and exercise myth. Recently, Cappola shared a video in which he sounds off on using food substitutes to lose weight, and viewers are sounding off in the comments.

The clip opens with the viral TikTok video of the recipe for “a healthy alternative to a Coke.”

Suddenly, the clip cuts to a shot of Cappola looking skeptically at the camera while taking a deep breath.

Upon learning that the alternative Coke recipe consists of a combination of balsamic vinegar and sparkling water over ice in a glass, Cappola goes about his day while screaming internally, as indicated by the on-screen text.

How Evan Mock manifested his rapid ascent to stardom:

The tension continues to build as Cappola heads home after work. Finally, he returns and tells his partner she should probably take her client outside before launching into a “diet-irade.”

“Stop making things other things, so you can have that thing,” Cappola declares before explaining that a single 140 calorie can of Coke is not why people struggle to meet their fitness goals.

“Five of these one day would hold you back,” Cappola says, pointing at the Coke. “That’s a habit and behavioral issue.”

After mentioning that Diet Coke and Coke Zero are available for those wishing to drink five cans daily, Cappola leaves viewers with one last hot take.

“Cauliflower pizza is not PIZZA! It’s cauliflower with cheese and sauce, ”Cappola asserts, explaining that it’s possible to overindulge in healthy foods, too.

Cappola closes the video by saying, “We’re all trying to make it in this world. We don’t have to make a chemistry project every time we want something. “

Viewers took to the comments to voice their opinions on the dietary matter.

“Balsamic and La Croix sounds absolutely foul. Eat your dressing on a salad, don’t drink it, ”one user joked.

“It’s not about the calories for me. Cokes are just terrible for you, including diet drinks. Eat and drink clean, people, ”wrote one TikToker.

“The only difference between medicine and poison is dosage.” [The] The first time I heard that it hit me, ”one viewer shared.

While viewers had different opinions regarding diets, everyone seemed to agree that balsamic vinegar with sparkling water is a combination they’d like to forgo.

In The Know is now available on Apple News – follow us here!

The post Fitness trainer goes off on TikTok about viral ‘healthy Coke’ substitute: ‘Stop making things other things’ appeared first on In The Know.

More from In The Know:

TikTokers are bonding over nostalgia with an ABBA song

I’m a lifestyle editor, and these are 18 items I’m shopping at Nordstrom in June

Over 2,300 Amazon shoppers rave about this oil cleanser for removing makeup and unclogging pores – and it’s on sale

Ernesto Castro
At least a dozen high temperature records were tied or broken across Eastern US in latest heat wave
Many Russian Cyberattacks Failed in First Months of Ukraine War, Study Says