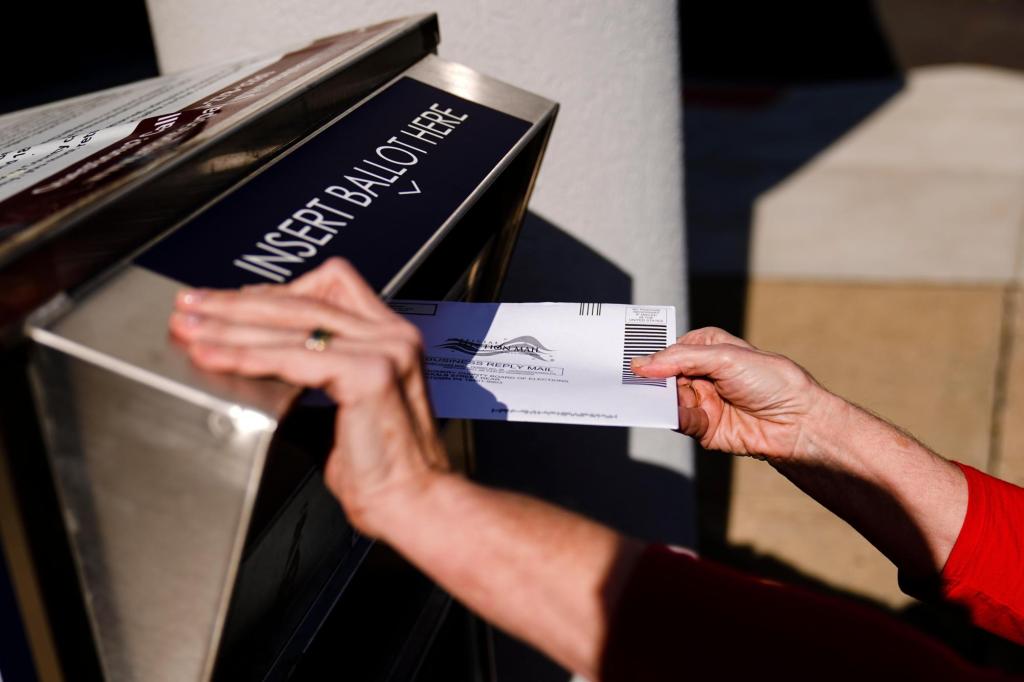 A film debuting in over 270 theaters across the United States this week uses a flawed analysis of cellphone location data and ballot drop box surveillance footage to cast doubt on the results of the 2020 presidential election nearly 18 months after it ended.

But that’s based on faulty assumptions, anonymous accounts and improper analysis of cellphone location data, which is not precise enough to confirm that somebody deposited a ballot into a drop box, according to experts.

The movie was produced by conservative filmmaker Dinesh D’Souza and uses research from the Texas-based nonprofit True the Vote, which has spent months lobbying states to use its findings to change voting laws. Neither responded to a request for comment.

Here’s a closer look at the facts.

CLAIM: At least 2,000 “mules” were paid to illegally collect ballots and deliver them to drop boxes in key swing states ahead of the 2020 presidential election.

THE FACTS: True the Vote didn’t prove this. The finding is based on false assumptions about the precision of cellphone tracking data and the reasons that someone might drop off multiple ballots, according to experts.

“Ballot harvesting” is a pejorative term for dropping off completed ballots for people besides yourself. The practice is legal in several states but largely illegal in the states True the Vote focused on, with some exceptions for family, household members and people with disabilities.

True the Vote has said it found some 2,000 ballot harvesters by purchasing $ 2 million worth of anonymized cellphone geolocation data – the “pings” that track a person’s location based on app activity – in various swing counties across five states. Then, by drawing a virtual boundary around a county’s ballot drop boxes and various unnamed nonprofits, it identified cellphones that repeatedly went near both ahead of the 2020 election.

If a cellphone went near a drop box more than 10 times and a nonprofit more than five times from Oct. 1 to Election Day, True the Vote assumed its owner was a “mule” – its name for someone engaged in an illegal ballot collection scheme in cahoots with a nonprofit.

The group’s claims of a paid ballot harvesting scheme are supported in the film only by one unidentified whistleblower said to be from San Luis, Arizona, who said she saw people picking up what she “assumed” to be payments for ballot collection. The film contains no evidence of such payments in other states in 2020.

Plus, experts say cellphone location data, even at its most advanced, can only reliably track a smartphone within a few meters – not close enough to know whether someone actually dropped off a ballot or just walked or drove nearby.

“You could use cellular evidence to say this person was in that area, but to say they were at the ballot box, you’re stretching it a lot,” said Aaron Striegel, a professor of computer science and engineering at the University of Notre Dame. Dame. “There’s always a pretty healthy amount of uncertainty that comes with this.”

Similarly, there are plenty of legitimate reasons why someone might be visiting both a nonprofit’s office and one of those busy areas. Delivery drivers, postal workers, cab drivers, poll workers and elected officials all have legitimate reasons to cross paths with numerous drop boxes or nonprofits in a given day.

True the Vote has said it filtered out people whose “pattern of life” before the election season included frequent nonprofit and drop box locations. But that strategy wouldn’t filter out election workers who spend more time at drop boxes during the election season, cab drivers whose daily paths don’t follow a pattern, or people whose routines recently changed.

In some states, in an attempt to bolster its claims, True the Vote also highlighted drop box surveillance footage that showed voters depositing multiple ballots into the boxes. However, there was no way to tell whether those voters were the same people as the ones whose cellphones were anonymously tracked.

A video of a voter dropping off a stack of ballots at a drop box is not itself proof of any wrongdoing, since most states have legal exceptions that let people drop off ballots on behalf of family members and household members.

For example, Larry Campbell, a voter in Michigan who was not featured in the film, told The Associated Press he legally dropped off six ballots in a local drop box in 2020 – one for himself, his wife, and his four adult children. And in Georgia, Secretary of State Brad Raffensperger’s office investigated one of the surveillance videos circulated by True the Vote and said it found the man was dropping off ballots for himself and his family.

CLAIM: In Philadelphia alone, True the Vote identified 1,155 “mules” who illegally collected and dropped off ballots for money.

THE FACTS: No, it didn’t. The group hasn’t offered any evidence of any sort of paid ballot harvesting scheme in Philadelphia. And True the Vote did not get surveillance footage of drop boxes in Philadelphia, so the group based this claim solely on cellphone location data, its researcher Gregg Phillips said in March in testimony to Pennsylvania state senators.

Pennsylvania state Sen. Sharif Street, who was there for the group’s testimony in March, told the AP he was confident he was counted as several of the group’s 1,155 anonymous “mules,” even though he didn’t deposit anything into a drop box in that time period.

During the 2020 election season, Street said, he brought those devices on trips to nonprofit offices and drop box rallies. He also drove by one drop box up to seven or eight times a day when traveling between his two political offices.

“I did no ballot stuffing, but over the course of time, I literally probably account for hundreds and hundreds of their unique visits, even though I’m a single actor in a single vehicle moving back and forth in my ordinary course of business, Street said.

City election commission spokesman Nick Custodio said the allegations matched others that had been debunked or disproven after the 2020 election.

“The Trump campaign and others filed an unprecedented litany of challenging Philadelphia elections with dubious and unsubstantiated allegations of fraud, all of which were quickly and resoundingly rejected by both state and federal courts,” Custodio said.

CLAIM: Some of the “mules” True the Vote identified in Georgia were also geolocated at violent antifa riots in Atlanta in the summer of 2020, showing they were violent far left actors.

THE FACTS: Setting aside the fact that the film doesn’t prove these individuals were collecting ballots at all, it also can’t prove their political affiliations.

The anonymized data True the Vote tracked doesn’t explain why someone might have been present at a protest demanding justice for Black deaths at the hands of police officers. The individuals who were tracked there could have been violent rioters, but they could also have been peaceful protesters, police or firefighters responding to the protests, or business owners in the area.

CLAIM: Alleged ballot harvesters were captured on surveillance video wearing gloves because they didn’t want to leave their fingerprints on the ballots.

THE FACTS: This is pure speculation. It ignores far more likely reasons for glove-wearing in the fall and winter of 2020 – cold weather or COVID-19.

True the Vote’s researcher claimed in the movie that voters in Georgia started wearing gloves to prevent their fingerprints from touching ballot envelopes after two women in Yuma, Arizona, were indicted on Dec. 23, 2020 for alleged ballot harvesting in that state’s primary election. But the Arizona indictment didn’t mention anything about fingerprints.

Voting in Georgia’s Jan. 5, 2021, Senate runoff election occurred during some of the coldest weeks of the year in the state, and when COVID-19 was surging.

In fact, the AP in 2020 documented multipleexamples of COVID-cautious voters wearing latex gloves and other personal protective equipment to vote.

In a similarly speculative allegation, the film claims its supposed “mules” took photographs of ballots before they dropped them into drop boxes in order to get paid. But across the US, voters frequently take photos of their ballot envelopes before submitting them.

CLAIM: If it weren’t for this ballot collection scheme, former President Donald Trump would have had enough votes to win the 2020 election.

THE FACTS: This alleged scheme has not been proven, nor do these researchers have any way of knowing whether any ballots that were collected contained votes for Trump or for Biden.

There’s no evidence a massive ballot harvesting scheme dumped a large amount of votes for one candidate into drop boxes, and if there were, it would likely be caught quickly, according to Derek Muller, a law professor at the University of Iowa.

“Once you get just a few people involved, people start to reveal the scheme because it unravels pretty quickly,” he said.

Absentee ballots are also verified by signature and tracked closely, often with an option for voters themselves to see where their ballot is at any given time. That process safeguards against anyone who tries to illegally cast extra ballots, according to Barry Burden, a University of Wisconsin-Madison political science professor and director of the Elections Research Project.

“It seems impossible in that system for a nefarious actor to dump lots of ballots that were never requested by voters and were never issued by election officials,” Burden said.

This is part of AP’s effort to address widely shared misinformation, including work with outside companies and organizations to add factual context to misleading content that is circulating online. Learn more about fact-checking at AP.