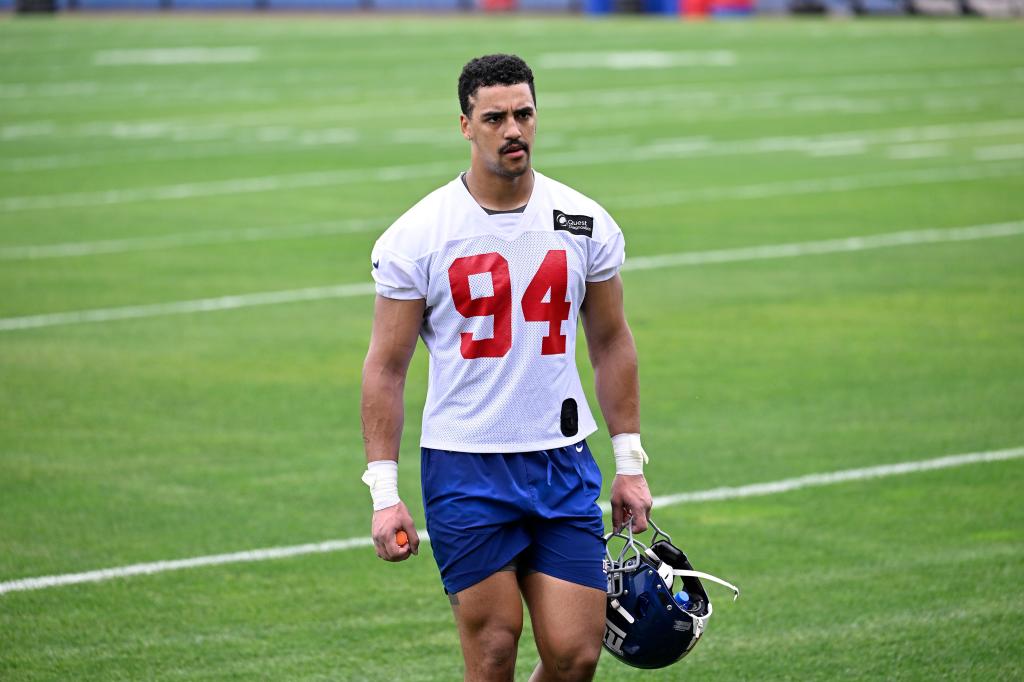 Elerson Smith understands you might not know his deal.

Why should Giants’ fans have his name high on their list of players to watch for the upcoming season?

The opportunity Smith has in front of him is… somewhat nebulous. The small-school outside linebacker got on the field so late last season, his rookie year, that it was tempting to forget he was still around. He did so little in his scant playing time that it was natural to assume his shelf life might expire once a brand new coaching regime marched in, with the front office that made him a fourth-round pick in the 2021 draft replaced by general manager Joe Schoen and other new personnel executives. Smith, long and lean, was a holdover and pretty much all those who championed for him a year ago are no longer employed by the Giants.

The 23-year-old pass rusher has a second chance to make a first impression, this time with a new defensive coordinator, Wink Martindale, and new position coach, Drew Wilkins, and also a new head coach, Brian Daboll. He is raring to go and believes he will not stay anonymous forever.

“For me it was just getting clarification, what their standards are and working from there,” Smith said.

There is no need for clarification on this: If Martindale has any inkling Smith can play a role in what will be a much more aggressive defense, he will find a spot for him. Azeez Ojulari after leading the team with eight sacks in 2021 returns for year no. 2. The Giants made Kayvon Thibodeaux the No. 5 overall pick in the 2022 draft. If healthy, they will be the starting outside linebackers. Smith is part of a young mix of players that includes Oshane Ximines and Quincy Roche waiting in the wings.

Smith did what he needed to do at Northern Iowa – dominate at a lower level of competition, with 22 sacks, 32.5 tackles for loss, 16 quarterback hits and six forced fumbles in 38 games. A severe hamstring strain knocked him out of his first NFL training camp, landed him on injured reserve and put him way behind. Smith did not make his Giants debut until Week 9, limited to special teams. He eventually picked up 103 snaps on defense – 60 as a pass rusher – and had four hurries and two quarterback hits for six total pressures. His first quarterback hit, in a loss to the Eagles, forced Jalen Hurts into a throwaway.

This spring, Smith received plenty of work and late in the organized team activity schedule, working with the starters in place of the sidelined Thibodeaux, Smith applied pressure on Tyrod Taylor to blow up a play.

Smith is increasingly looking for the part. He arrived a year ago more closely resembling a small forward than an NFL linebacker, at around 245-250 pounds stretched across his lanky 6-foot-6 frame. One year into the NFL grind, he is up to 260 pounds, although he is still trim.

Go behind the scenes with Big Blue

Sign up for Inside the Giants by Paul Schwartz, a weekly Sports + exclusive.

“I’m just tall, stretch it out a little bit so you can’t really tell,” Smith said of his added weight.

Martindale loves his linebackers, especially those with length. This should play well with what Smith offers.

“I always say there’s a good place for a small person,” Martindale said. “It’s behind a big, long person in this league, because you know, it helps everything. It helps your open-field tackling and helps separating off blocks and it helps going up to the 50/50 ball. Length does play a big part of it. ”

It did not take Smith long to recognize what he called “the different philosophical approaches” with this new defensive staff. The previous defensive coordinator, Patrick Graham, was more about picking his spots. Martindale forces the issue. When Smith sees what is in store for him and the other outside linebackers in Martindale’s system, he senses opportunity aplenty.

“He does a good job of scheming up aggressive rushes and it affects quarterbacks a lot, which is an outside linebacker’s dream,” Smith said. “I think I definitely have a place here but that all starts with understanding the process of the work that it takes to be a good NFL player and that’s my goal, to come here, contribute and win games. For sure I feel I belong here. ”