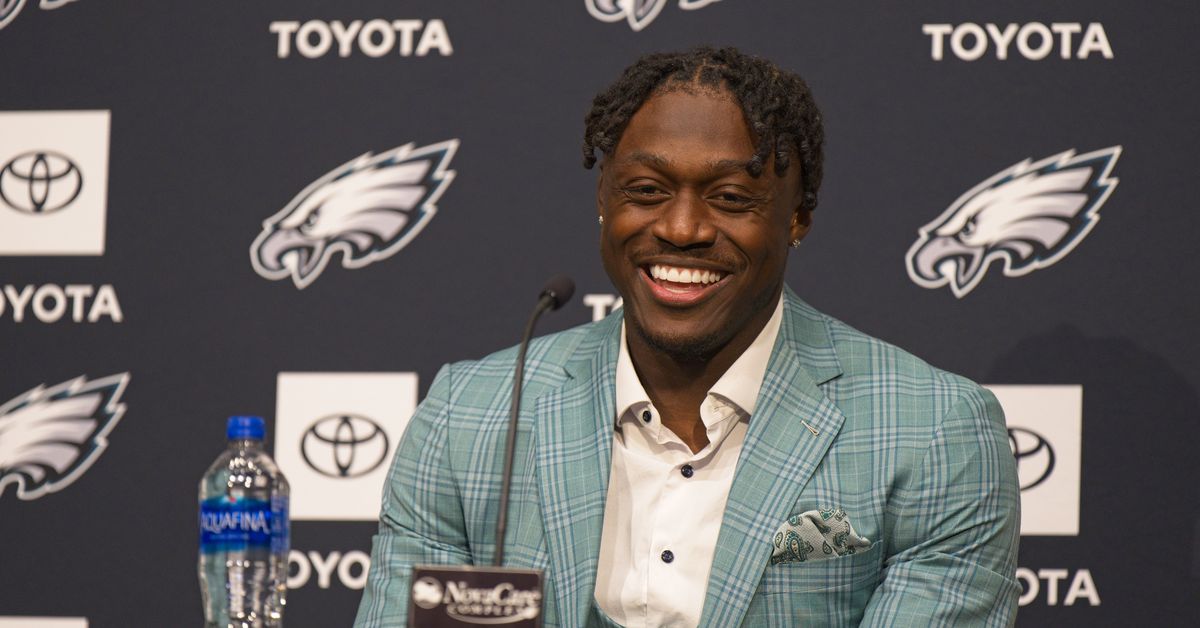 Let’s get to the Philadelphia Eagles links …

Ranking the best and worst NFL offseasons of 2022: Which teams improved and declined, plus what went right, wrong and what’s next – ESPN +
What went right: Blessed with cap space and draft assets after trading Carson Wentz and moving down in the 2021 draft, general manager Howie Roseman showed off this offseason. The Eagles signed star edge rusher Haason Reddick to a three-year, $ 45 million contract, brought back Derek Barnett on a reasonable deal and convinced Fletcher Cox to take a pay cut. When the Giants were unable to find a trade partner for James Bradberry, Philadelphia swooped and signed the talented cornerback to a one-year, 7.3 million deal, giving the team its best duo at cornerback on paper since the days of the Dream Team. Veterans Kyzir White and Anthony Harris are in the building on modest one-year deals. That would be enough to have a great time, but the Eagles extracted a 2023 first-rounder from the Saints for moving down from No. 19 to No. 101 in the 2022 draft, a pick that could land higher than most people expect if the Saints crater post-Sean Payton. On draft day, they moved up ahead of the Ravens to draft Jordan Davis, then used their other first-round pick to trade for Titans superstar AJ Brown, giving them a dynamic one-two receiving punch between Brown and DeVonta Smith. They even landed draft faller Nakobe Dean in the third round, which was good value even given concerns about Dean’s medical report. As it stands, the Eagles addressed significant weaknesses at cornerback and receiver. They pushed one of their first-round picks into the future and opened up the possibility of a more valuable first-rounder, giving them more flexibility if they want to do something aggressive at quarterback next offseason. Jason Kelce came back for another year. Outside of not using their top picks to land a quarterback such as Russell Wilson, it’s difficult to poke many holes in what they did this offseason.

What would have to go wrong for the Eagles to NOT make the playoffs? – BGN
Jalen Hurts Doesn’t Progress. The Eagles had to abandon the passing game last year because they simply didn’t have enough talent at wide receiver and because their quarterback was not at all comfortable playing in a pass-heavy offense. So, they went to the running game and relied mostly on his legs to move the football. And hey, that worked, but I’m not sure you can go to that well again. With AJ Brown no heading a wide receiver room that features DeVonta Smith, Quez Watkins and Zach Pascal, and Dallas Goedert emerging as a stud receiving tight end, Hurts has no excuses. He has to be able to put up 3,500 yards passing in a league that has gone out of their way to make sure quarterbacks had an easier time throwing the football. But if Hurts struggles, it could mean some inexplicable losses.

NFC East Mixtape Vol.59: Ranking all of the division rivals – BGN Radio
Brandon Lee Gowton and RJ Ochoa reflect on the rivalries that run deep within the NFC East and rank each of them.

Eagles rookie NFL player comparisons: Jordan Davis – PhillyVoice
Again, it’s hard to find a great match on that front because nobody in NFL history has Davis’ combination of size and athletic testing measurables. But as far as play style goes, when he was at the top of his game, Haynesworth could win either with his brute size or his impressive quickness. I believe Davis can be a bigger, more athletic, more personable, and much more motivated version of Haynesworth.

10 reasons Eagles’ offense will be better in 2022 – NBCSP
5. Jalen Reagor: Don’t want to pile on here, but the reality is that dramatically reducing – or possibly eliminating – Reagor from the offense will help immeasurably. He played 750 snaps last year! That’s 750 snaps where the offense had one guy who was just not going to make a play. Reagor last year became the 9th NFL wideout in the last 37 years to start at least 13 games and fail to record 300 yards and the 8th WR in the last 50 years with at least 43 touches and 331 or fewer scrimmage yards. Just having him NOT playing is an upgrade.

Why the Steelers won’t receive a comp pick for losing Brandon Hunt to the Eagles – Behind The Steel Curtain
When it comes to Brandon hunt, his role in the Philadelphia Eagles front office has been reported as being in the scounting department and is obviously not as general manager or an equivalent title. This, along with the typical method in which the picks are awarded, is the reason the Pittsburgh Steelers will not receive any compensatory draft picks for 2023.

Deion Jones could reunite with Dan Quinn if the Atlanta Falcons move on after June 1st – Blogging The Boys
The last bullet point is said sort of tongue-in-cheek, but it bears repeating that the Cowboys did not pursue someone with a Dan Quinn connection who was on the market. Deion Jones would hardly fetch what the Los Angeles Rams paid to Bobby Wagner so perhaps Dallas would be more open to a lower price tag, but the reality is that they still need some depth at the position at the moment. Establishing depth at linebacker helps the flexibility of Micah Parsons to roam up front and rush the passer. At present the Cowboys would be forced to rely on Leighton Vander Esch staying healthy for the entire season and while that was the case last year the likelihood of repeating it is not stable enough to bank on. Perhaps the Cowboys have been waiting for June to hit in order to become shoppers once again. Prices are about to drop and that is usually when they like to spend if they choose to do so.

Is Terry McLaurin Worth a M 100 Million Extension? – Hogs Haven
The Washington Commanders have a big-time decision on their hands when it comes to the upcoming contract of Terry McLaurin. Entering his fourth season, McLaurin has played well beyond his 3rd-round status as a wideout in Washington and looks to become one of the few wide receivers in Washington’s storied history to put together three straight 1,000 receiving yard seasons. As we stand here today, Terry isn’t attending Washington’s voluntary OTA’s and will likely not participate in team activities until the Commanders start training camp before heading into the preseason. He’s slated to become a free agent after this season, with no deal between the two parties set in stone just yet. We’re approaching the June 1st date that’ll bring Washington at least an added 11.9 million dollars in cap space after the release of former S / LB Landon Collins, both McLaurin and the Commanders front office still have time to work out a deal before their 2021-22 season begins.

How long is the leash on Daniel Jones? – Big Blue View
It’s reasonable to imagine that this would be the put-up or shut-up time for Daniel Jones. The last two games of this four-game stretch are at MetLife, and it will be no surprise if fans are restless if the Giants lose most of them. After these games, five of the final seven games are within the division. If Jones has not solidified himself as a franchise quarterback by this point, this may be when Daboll switches to Tyrod Taylor to finish the season and audition to be the placeholder QB1 for 2023. Alternatively, Jones may have performed well up to this point. In that case, the end-of-season gauntlet of five division games plus Minnesota and Indianapolis will be his final argument to retain his starting job in 2023. Play well in these games, and return in 2023.

One more accuser against Deshaun Watson steps forward – Dawgs By Nature
Just when the NFL has wrapped up its own investigation into the assault and inappropriate sexual misconduct allegations against Deshaun Watson, one additional woman has filed a lawsuit against the Cleveland quarterback. The latest alleged victim, who had previously decided not to enter a lawsuit, changed her mind after viewing last week’s HBO special “Real Sports with Bryant Gumbel.” The latest lawsuit was filed in Texas on Tuesday as first reported on ESPN.

John Madden returns as ‘Madden 23’ cover – SB Nation
EA Sports released the cover of Madden NFL 23 and for the first time in forever it’s a choice everyone agrees with. Legendary coach, figure, and namesake of the brand John Madden will be featured.