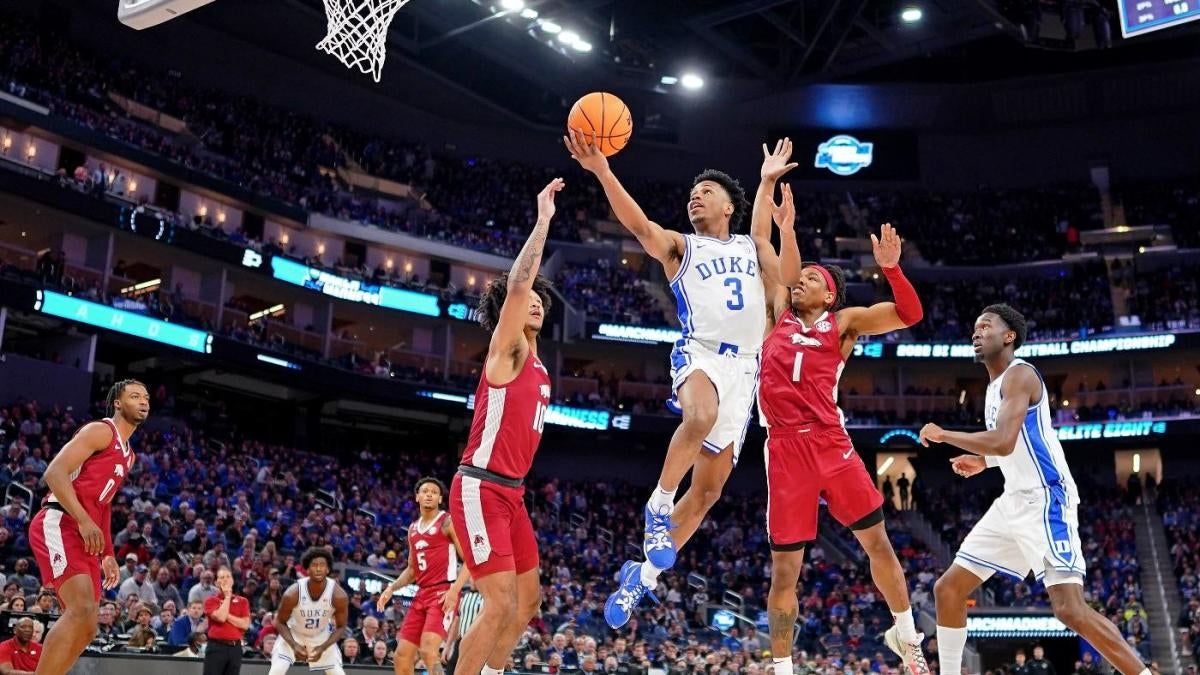 Duke faced yet another elite defense on Saturday night in the Elite Eight, and the Blue Devils turned in another elite offensive performance as they cruised past Arkansas 78-69 to reach next week’s Final Four. AJ Griffin led the No. 2 seed Blue Devils with 18 points, but it was a balanced effort for Duke, which followed up on Thursday’s masterful showing against Texas Tech with another hot shooting night.

As a team, Duke shot 54.7% and dominated the paint against an Arkansas team that saw its season end in the Elite Eight for the second straight season. This will mark Duke’s first Final Four appearance since 2015 and bring coach Mike Krzyzewski’s career tally of Final Four appearances to 13 as he prepares to retire at season’s end. Duke will play the winner of Sunday’s game between No. 8 seed North Carolina and No. 15 seed Saint Peter’s next Saturday.

The teams traded runs in the first half, but the Blue Devils used an 8-0 spurt in the final 1:20 of the half to open up a 45-33 halftime lead. Trevor Keels drilled a 3-pointer at the halftime buzzer to send Duke into the locker room with the momentum.

Arkansas cut the deficit to 53-48 with 13:19 remaining on a Jaylin Williams 3-point play. But Duke promptly went on a 10-0 run that began with a Paolo Banchero bucket. By the 9:07 mark, the Blue Devils owned a 66-51 edge, and the Razorbacks never got back within single digits until the final minute when the game was out of reach.

Duke’s victory sets up a Final Four matchup for the ages that will be a great story, regardless of who the opponent winds up being. If it’s the Tar Heels, then Duke will be facing its arch rival in the Final Four after UNC won at Duke in Coach K’s last home game on March 5. The Blue Devils were itching for a rematch in the ACC Tournament title game but wound up playing Virginia Tech instead after the Hokies beat North Carolina in a semifinal game.

They may get a rematch after all, and this one would have legendary stakes attached to it. But, of course, North Carolina must first get past Saint Peter’s. The Peacocks are the first No. 15 seed to ever reach the Elite Eight and have captured the hearts of the nation in the process. With victories against Kentucky, Murray State and Purdue under their belt, the Peacocks won’t be intimidated by the Tar Heels and they wouldn’t back down against Duke, either.

Regardless of who Duke plays next Saturday, it’s going to be one of the most captivating Final Four games in quite some time.

When Arkansas center Jaylin Williams picked up his second foul with 5:29 remaining in the first half, he initially stayed in the game. But 33 seconds later, he got sent to the bench with Arkansas trailing just 31-26. He remained out for the rest of the half, and Duke outscored Arkansas 14-7 during that stretch.

Williams was key in stemming a Duke run earlier in the first half by drawing a pair of charges and scoring five quick points in a 30-second span. Without him on the floor, the Razorbacks could not stem another run and entered the locker room down 12 points. The 6-foot-10 sophomore was Arkansas’ best player on Saturday, finishing with 19 points, 10 rebounds and two steals. But the time he missed at the end of the first half opened the door for Duke to take control of the game.

Duke point guard Jeremy Roach has been putting his sophomore year shine on display during the NCAA Tournament. But classmate Mark Williams has also taken major strides during Year Two in the program, and he delivered again on Saturday.

Mark Williams scored 10 of his 12 points in the first half and had a double-double with 11:10 remaining in the game. He finished 6 of 6 from the floor and helped Duke to a 46-34 edge in second-chance points. The performance merely continued a strong NCAA Tournament run for the 7-footer. Williams scored 15, 15 and 16 points, respectively, in each of Duke’s first three tournament games and has been a menace defensively as well.

Williams blocked 13 shots over Duke’s first three games in the Big Dance, and he added three more to tally against Arkansas to match Shane Battier’s 2001 school record for most blocks in a single NCAA Tournament. Of course, Duke won it all in 2001, which meant that Battier had six games in which to set that bar. Williams will have at least five to try and set the new record after helping key the Blue Devils’ win on Saturday.

Ernesto Castro
Only Murders in the Building: Season Two? Has the Hulu Series Been Cancelled or Renewed?
Taylor Hawkins had 10 substances in his system when he died, officials say