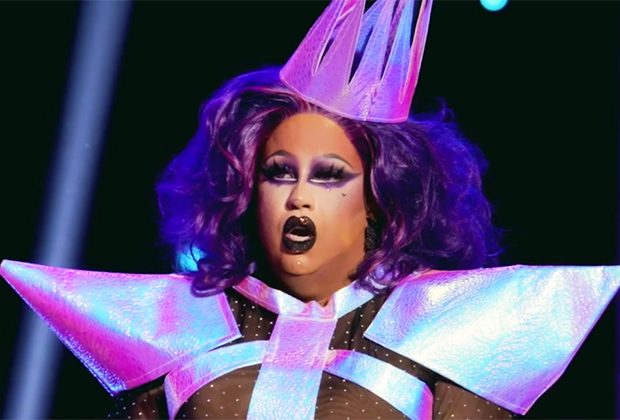 Friday’s episode of RuPaul’s Drag Race was very good. In fact, you might even say it was good as… gold.

That’s right, one of the queens has finally unwrapped a coveted golden chocolate bar, officially putting that sad trombone sound effect out of its (and our) misery.

So, which lucky queen found herself in possession of this life-saving confection? Far be it for me to drag this season out any further – it was Bosco. The judges weren’t impressed with her performance as “Saltine” in Moulin Ru: The Unauthorized Rusical, nor were they about to tolerate her giving the same bra-and-panties situation that she’s brought to the runway multiple times before. That’s how the Seattle native found herself up against lip sync assassin Jorgeous, who ultimately won their battle to the tune of Whitney Houston’s “Heartbreak Hotel.”

But who’s to blame for Bosco’s poor performance this week? Was it the work of her inner saboteur, causing her to crack under the pressure of competition? Perhaps it was simply karma repaying Bosco for being such a diva during the casting process; She refused to give the part up to Lady Camden, who ironically won the challenge with her portrayal of the character that neither queen wanted. (Click here to watch that fiasco unfold.)

“What feels good about this is that I didn’t win the fight with Bosco, and I may not have been the loudest voice in the room, but I turned that s – t out, bitch!” Camden said of her win.

Of course, we all know that this week’s real The winner was Leland, who not only composed one of the best Rusicals in recent memory, but also starred in it. The newfound leading man gets extra points from me for successfully working a “UK Hun” reference in those lyrics.

Either way, this was certainly a reality check for Bosco, especially when Ru asked the queens which of their competitors they would send home… and they all picked her. You know it’s bad when Daya Betty comes away as the “funny” one of the episode, while someone else – let alone Bosco – is considered the “rude” one.

So, yes, we’ve gone yet another week without a queen being eliminated – and I’m sure Daya will have plenty of thoughts about that to share – at least we know that the queens’ one save is finally out of play. In a season full of uncertainties, at least we can cling to that.

And even though it’s irrelevant, let’s poll the group anyway: Was Ru correct in her attempt to send Bosco packing, or should Jorgeous have been told to sashay away? Cast your vote below, then drop a comment more of your thoughts. Which of the seven remaining queens will win this whole thing?

Janice Shirey
Kate the Caribbean Queen: How the Duchess juggled 4am WhatsApps with a dazzling fashion show
Why CB Sauce Gardner Is A Realistic NY Jets Option At No. 4 | Film