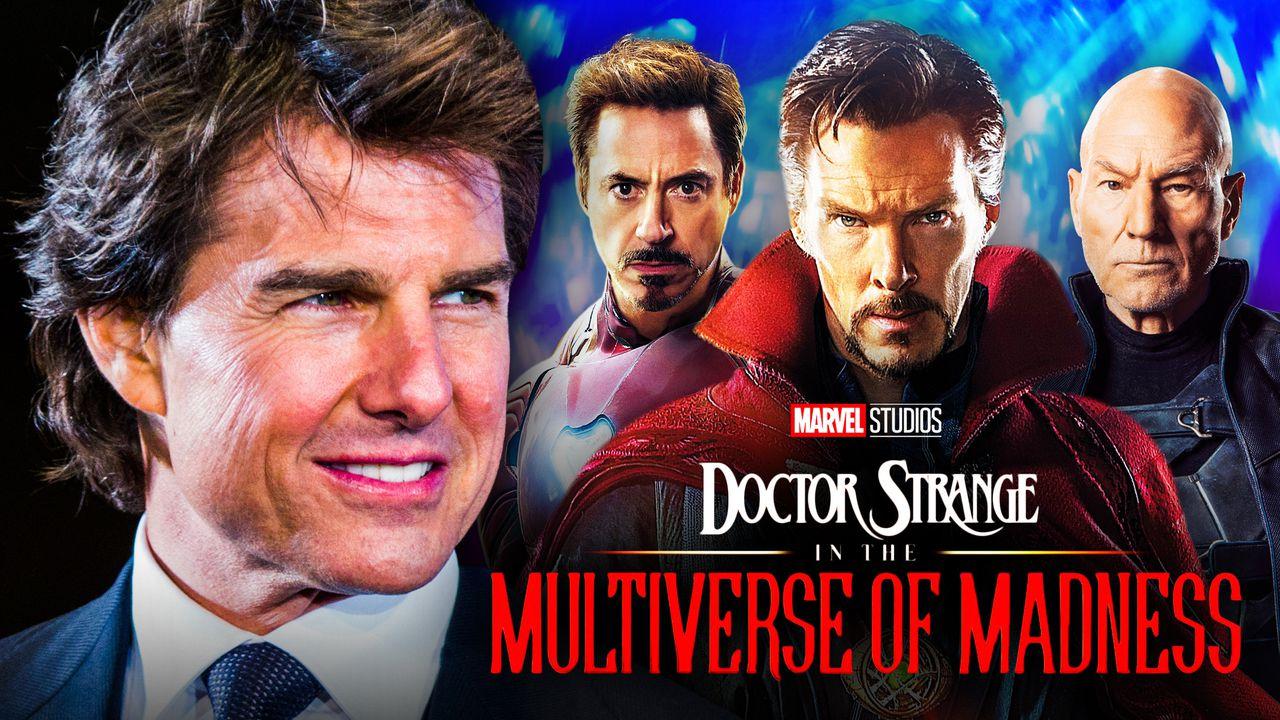 Cameos, cameos, cameos. That is what everyone seems to be talking about now that Doctor Strange in the Multiverse of Madness has hit theater screens worldwide. The Multiversal epic is finally here after years in the works and is already making a petty penny at the box office. Directed by Sam Raimi Spider-Man and Evil Dead fame), this sequel blended elements of horrors into the MCU for the first time, as the Scarlet Witch unleashed her fury across realities.

WARNING: The rest of this article contains spoilers for Doctor Strange in the Multiverse of Madness.

However, in the lead-up to the film much was made about the potential for Multiversal cameos in Multiverse of Madness. It was teased that Patrick Stewart would be back reprising his X-Men role as Charles Xavier (aka Professor X), but that only felt like a drop in the bucket when it came to the potential for these surprises.

One name that was thrown around by fans before release was Tom Cruise as a potential Tony Stark variant. Cruise was in the running to play Stark back before Robert Downey Jr. was cast in 2008’s Iron Man. This would have given the veteran actor the opportunity to finally play the character, albeit in a smaller cameo role.

Well, Cruise did not appear as the Superior Iron Man, and Marvel is finally speaking up about the rumors that engulfed Multiverse of Madness in its run to release.

In an interview with Rolling Stone, Doctor Strange in the Multiverse of Madness screenwriter Michael Waldron addressed the now-defunct rumors that Tom Cruise was supposed to appear in the film.

When asked about Cruise and fan speculation regarding the actor appearing in the sequel, he said “Yeah, that was totally made up.” He said that he remembers talking to Marvel Studios head “Kevin [Feige] at one point “ if they could “get Tom Cruise’s Iron Man,” but nothing actually ever came of it:

“Yeah, that was totally made up. I mean, there’s no cut footage of Tom Cruise! But I love Tom Cruise, and I said to [Marvel Studios president] Kevin [Feige] at one point, I was like, Could we get Tom Cruise’s Iron Man? I remember reading about that in Ain’t It Cool News back in the day, that Tom Cruise was going to be Iron Man. “

The screenwriter then went on to say how “cool” it would have been to have Cruise in the movie, but “He was shooting Mission Impossible 7 and 8. “ He clarified that bringing Cruise in was considered, but ultimately never happened “because of availability:”

Rolling Stone: “So to be totally clear, did anyone reach out to Tom Cruise?”
Michael Waldron: “I don’t believe so. I just don’t think it was ever an option, because of availability.”

Superior Iron Man will Have to Wait

As much as Patrick Stewart returning to the role of Charles Xavier seemed like a sure thing for Multiverse of Madness, so did Tom Cruise as some alternate version of Iron Man. Many even believed, what would ultimately turn out to be, Lashana Lynch’s Captain Marvel seen in an early trailer in the film to be Tom Cruise in a suit of Iron Man armor.

As has been said before, Cruise was originally in talks to play Tony Stark back at the inception of the MCU, with the part eventually going to Robert Downey Jr. So this would have been a cool place for the actor to live out his Marvel dream. But it didn’t happen.

And that is not to say it will never happen. With the Marvel Multiverse at play, anything seems possible. Only a week ago, it felt like a pipe dream to many that John Krasinski would actually ever show up on-screen as Reed Richards, and look what happened! So the Multiverse can work in mysterious ways. It just seems like this Cruise dream may be a little out of reach.

One has to remember just how packed this man’s schedule is these days. Whether he is piloting fighter jets in the next Top Gun or saving the world as Ethan Hunt in the Mission Impossible franchise, it feels like Tom Cruise always has something on the go.

So if Marvel Studios is ever serious about getting the actor in on the MCU, they will have to either book him years in advance or wait until things slow down for him; However, that doesn’t look like it is going to happen anytime soon.

The Tom Cruise-less Doctor Strange in the Multiverse of Madness can be seen in theaters now.