Critic’s Notebook: The 94th Academy Awards Were Already Bad, But Then They Got Worse

Home /Movies/Critic’s Notebook: The 94th Academy Awards Were Already Bad, But Then They Got Worse 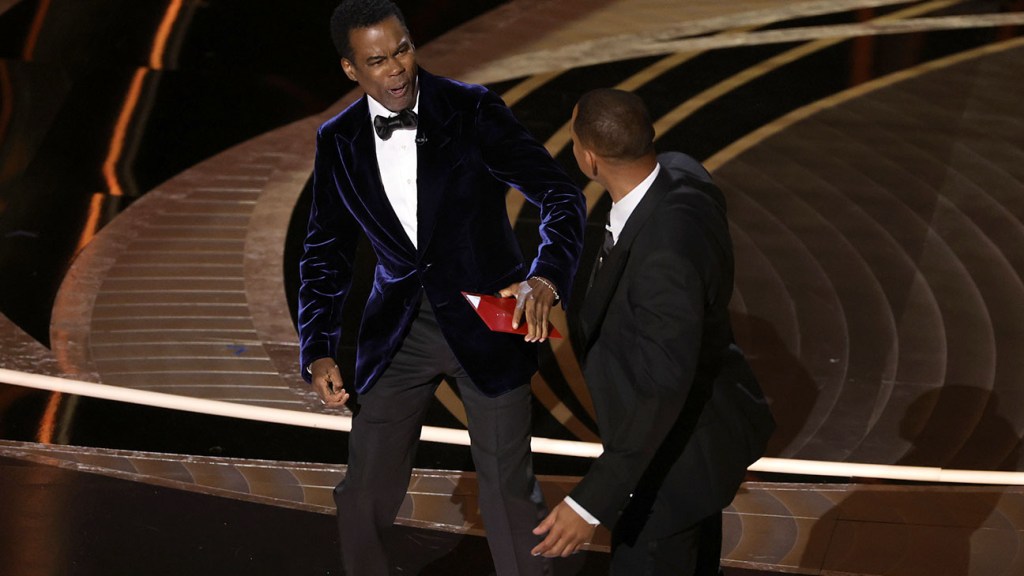 After a fairly promising first hour, the show had begun to flag in basically the same ways Oscar telecasts always flag, proving conclusively that producer Will Packer’s attempt to fix the event was barely a band-aid.

After months of big promises about finishing the telecast by 11 pm ET, the Oscars were running long, and one key decision after another was yielding something between embarrassment and a fizzle instead of fireworks.

Let’s go through some of those changes.

Hosts Amy Schumer, Regina Hall and Wanda Sykes had moments. Their three-person monologue was uncomfortable and showed no real rapport within the trio, no sense of why it was better to have all three of them as opposed to just a single host to make a few snarky comments and move things along. But it wasn’t horrible.

After that first monologue – triologue, I guess – Schumer came out and did a second series of bits that was, in fact, much sharper and funnier than anything that came before. I laughed out loud at barbs about Don’t Look Up and Being the Ricardos – “It’s like making a biopic about Michael Jordan and just showing the bus trips between games” – and it generally felt like she’d been entrusted to handle the Ricky Gervais “roast” portion of the evening.

The much-discussed choice to move eight categories out of the main telecast, present them before the show and then broadcast trimmed-down versions was not, in and of itself, a disaster. Most viewers probably didn’t notice the lack of walk-up time, the cutting within the speeches and the very selective reaction shots from the crowd. But it was a move made to serve exactly one purpose: Get the telecast to a reasonable three hours. It was not working. The show was going to run long regardless – and if the show was going to run long regardless, then a show dedicated to honoring the industry shouldn’t be going out of its way to insult artisans in that industry. This is definitely one of those “If it wasn’t a win, it was a loss” things. There’s no middle ground.

The equally buzzed-about – almost entirely via sheer mockery – Twitter awards attempting to bring populist interest to the show were an unqualified fiasco. The nonsensical “most cheer-worthy moments” poll winner (Zack Snyder’s Justice League) was a victory for Zack Snyder’s eager social media fandom, though I’m not sure even those enthusiasts believe that “The Flash Enters the Speed ​​Force” was the “most cheer-worthy” moment in cinema history. Dumb, but whatever. And the Snyder devotees were also triumphant with the “fan favorite,” Army of the Deadwhich beat the blockbuster Spider-Man sequel and, naturally, Minamata for the honor. The categories – which came down to five minutes of clips during the show – were good fodder for snark during the weeks leading up to the event, but added nothing to the telecast. I’d have preferred five minutes of craftspeople walking to the stage.

The time that was saved with the truncated technical categories was supposed to go to performances, and those were mixed. Beyonce kicked things off with a truly excellent rendition of “Be Alive” from King Richard performed at a Compton tennis court. Sebastián Yatra’s “Dos Oruguitas,” Reba McEntire on “Somehow You Do” and Billie Eilish and Finneas with “No Time to Die” were fine, if generic and stage-bound. But who thought it was a good idea to save “We Don’t Talk About Bruno” until nearly two hours into the show after its target audience was either asleep or bored to tears?

Teasers leading up to the show enthusiastically promised tributes to James Bond and the 50th anniversary of The Godfather. The former was three extreme sports superstars introducing a clip package, as if there aren’t four living James Bonds and countless recognizable stars from the franchise who could have shown up for a standing ovation and a real tribute. The latter was Francis Ford Coppola, Al Pacino and Robert De Niro introducing a brief clip package. Two oddities: Pacino and De Niro didn’t say a word and De Niro, a deserving winner for the second Godfather movie, wasn’t in the movie they were honoring. Bizarre.

It was probably going to end up being another mediocre-to-bad show regardless, but then it became awful.

To begin with, Chris Rock came out and his material was dreadful. The “King Lear don’t get nothing on me!” crack to Denzel? Lame. The joke about how it would be strange for Javier Bardem and Penelope Cruz if only one of them won? Why was that funny? They’re both Oscar winners already. And then Rock made fun of Jada Pinkett Smith and how she looked like she was doing a sequel to GI Jane.

Leaving all context out of it: It wasn’t funny.

Context: Jada Pinkett Smith has alopecia. Also, last time Rock hosted the show he was merciless about Pinkett Smith’s decision to boycott tied to the #OscarsSoWhite controversy. Plus, it was the second joke of the show directed at Will and Jada, and Will didn’t seem like he wanted to play along with Hall’s faux flirtation earlier.

So it was all bad and going poorly before Smith charged the stage and slapped the comic, then yelled “Keep my wife’s name out of your fucking mouth!” twice. Rock, after 10 to 15 seconds of clumsy muting on the director’s part, somehow managed to regain composure and present the documentary Oscar to Questlove.

That was it for the show. What followed was an hour of sheer unpleasantness. On a different Oscar night, I might have expressed annoyance with turning the necrology segment into a song-and-dance in which no effort was put into actually honoring the legends the industry lost in the past year. The director’s focus was mostly on the performers and so I didn’t have a chance to play the annual, “Who got left out?” and “Why didn’t they mute the applause?” games. Those “In Memoriam” segments are so often messed up, and this was just another version of how to upstage a somber moment. As tactless juxtapositions go, it wasn’t quite as bad as going from Troy Kotsur’s beautiful acceptance speech to Chris Evans introducing a commercial for a Disney movie. Or maybe it was.

But then we all had to wait for Will Smith to actually win his Oscar. One of the most beloved figures in the industry, an actor who has blended lucrative smash hits and solid dramatic work, Smith was supposed to get a coronation. Instead, his sure-thing victory became excruciating as he cried and talked about how he was just echoing Richard Williams in protecting his family.

He apologized to the Academy and to his fellow nominees, but I don’t know how else to put this: If a comedian – one as brilliant as Rock at his peak or as hacky as Rock was Sunday night before the GI Jane joke – makes fun of you, you yell back at them. You ask Chris Rock when he was last funny. You make fun of the size of his genitals. Maybe you swear at him, because you’re angry and protecting your wife. You don’t stand up and commit assault on national TV, and it’s tempting to wonder what would have happened to anybody who had done the same thing and wasn’t 15 minutes away from winning an Oscar. I’m fairly sure a civilian taking a swing at Chris Rock for no reason would have been arrested. I’m not sure what happens if Javier Bardem, who was never winning Sunday night, had come up and slugged Rock, but I’m guessing he’d been escorted out of the building at a minimum.

Instead, not only did Will Smith get to stay in the venue, he got to take the stage and say whatever he wanted for however long he wanted, because under those circumstances, he was never going to get played off by the band. So he rambled and cried and never apologized to Chris Rock and never made any effort to tell anybody watching at home that punching somebody for insulting you isn’t right. Smith tied the incident to his character in a movie and offered jokes about whether or not he’ll get invited back. I’m sure he will. There’s no such thing as bad publicity, I guess.

Sorry, CODA team. It’s unlikely anybody will remember your sincere best picture acceptance. Sorry, Jessica Chastain. That was a powerful end to your speech, but that’s not what we’re talking about. Sorry, Ariana DeBose and Troy Kotsur, both trailblazing supporting performance winners. Sorry, Kenneth Branagh, who I really thought had won an Oscar before, but now definitely has. Sorry Dune, but congrats on all of those technical wins. Sorry, Encanto and I bet you all WISH we were talking about Bruno.

It might have been nice to review the show by concentrating on the attempts to innovate that fell flat. Instead, the 94th Academy Awards – which should have provided either a pleasant distraction from a world starting to emerge from a pandemic or the opportunity for advocacy relating to Russia’s invasion of Ukraine and discriminatory laws being passed around the country – will just be remembered as a moment of toxic awfulness and subsequent infection. Sometimes “unpredictable” is good. Not in this case.