Chicago P.D. Recap: Who Died in the Season 9 Finale? — Plus, Grade It! 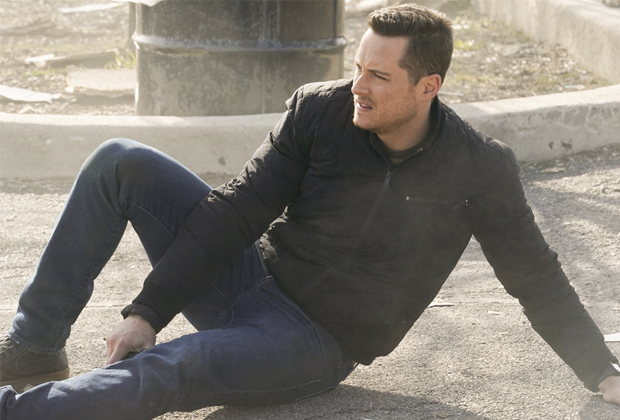 Picking up where we left off in the penultimate episode, Chicago PDSeason 9 finale found Intelligence scrambling to bring down Escano, who was going scorched earth on his whole operation.

While Upton would be just fine after that explosion which briefly knocked her out, the same couldn’t be said about the investigation. Escano was still on the run, and Anna feared that he would find her and kill her like he has everyone else who betrayed him. Voight promised to get her into witness protection once she spoke to an assistant district attorney.

Meanwhile, he ordered the team to pull all their evidence to present to ASA Chapman, who said they didn’t have enough for an arrest warrant. That’s when Voight threatened to ruin her career if she didn’t help, and Chapman granted a search warrant instead.

The team searched Escano’s bakery, where Voight and Halstead found him bleeding to death on the floor. With his last breath, he told them Anna had stabbed him, sending Voight into action to save her. He ordered the scene to be locked down – only Intelligence allowed in – and said they were going off the books for this one.

Halstead confronted Voight, reminding the sergeant of their conversation from a few months ago in which he said he would reach out before going off the deep end. Halstead wanted to bring in Anna and claim it was self-defense, but Voight knew that wouldn’t work since she basically fileted Escano.

The rest of Intelligence searched for evidence as normal, unaware that Anna was their main suspect. Meanwhile, Voight tried his best to help cover up Anna’s involvement, even cleaning blood from her stove. Upton then caught him tossing the blood-spattered parts of her car – which was seen on camera at the scene of the crime 20 minutes prior – into the river and refused to cover up another murder.

Voight’s determination to save Anna spurred a private conversation between Halstead and Upton about how to handle this. Upton didn’t want a repeat of the Roy situation, and Halstead assured that he could help Voight get out of this situation the right way. But at what cost?

Ruzek, Burgess and Atwater chased another lead, while Halstead went after Voight. Upton chose to follow her husband, telling him, “Where you go, I go.”

Voight tracked Anna to a gas station and watched as she caused a car accident. Knowing she was about to go down for murder, Anna pointed her gun at Voight while he desperately tried to talk her down. But there was no getting through to her. Hearing the approaching sirens, Anna fired on Voight, forcing Upton and Halstead to open fire on Anna.

Elsewhere, the rest of Intelligence closed in on what may be the biggest drug bust of their careers. They found pounds and pounds of paraphernalia stashed in the basement and celebrated the unexpected victory.

That was juxtaposed against the frantic scenes of Voight telling Anna to stay with him while they were both rushed to Chicago Med for treatment. Voight’s injuries were minor, though, and he focused on her survival. But Anna died on the operating table, leaving Voight devastated and holding back tears as he stared at her body.

What did you think of? Chicago PD’s Season 9 finale? Grade the episode below, and then leave your thoughts in the comments.

Janice Shirey
‘Failure of leadership’: what the papers say about Johnson and the Sue Gray Partygate report
Islanders sign 2018 second round pick to ELC