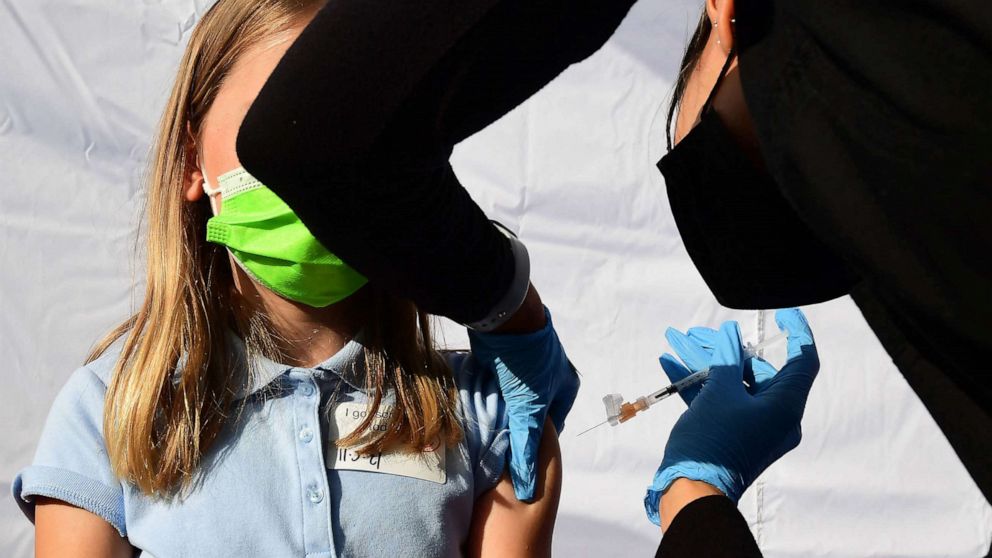 The Centers for Disease Control and Prevention Director Dr. Rochelle Walensky has signed off on expanding COVID-19 booster eligibility to include all children over the age of 5 years old, the agency announced Thursday evening.

Booster shots will now be authorized for use in children ages 5 to 11, at least five months after completing their first round of shots.

“Today, I endorsed ACIP’s vote to expand eligibility for COVID-19 vaccine booster doses. Children 5 through 11 should receive a booster dose at least 5 months after their primary series. Vaccination with a primary series among this age group has lagged behind other age. groups leaving them vulnerable to serious illness, “Walensky said in a press release. “With over 18 million doses administered in this age group, we know that these vaccines are safe, and we must continue to increase the number of children who are protected. I encourage parents to keep their children up to date with CDC’s COVID-19 vaccine. recommendations. “

Following the nation’s latest COVID-19 resurgence, the CDC also announced it is strengthening its recommendation for Americans over the age of 12, who are immunocompromised, as well as all people over the age of 50, to receive their second booster shot.

Earlier on Thursday, the CDC’s independent advisory committee gave the green light for Pfizer and BioNTech COVID-19 booster shots to be given to children ages 5 to 11 years old, paving the way for parents to get their children boosted as early as Friday morning.

“We have the tools we need to protect these people from severe disease, and to prevent any more tragic deaths,” Walensky said during brief remarks at the beginning of the meeting. “It’s important for us to anticipate where this pandemic is moving and deploy the tools we have where they will have the greatest impact.”

Earlier this week, the Food and Drug Administration authorized the use of the booster shots among younger children to be used at least five months after completing their first round of shots.

Children over the age of 5 became eligible for vaccination against COVID-19 in November, so the first kids who were in line for their shot have now had about six months of protection.

Pfizer asked the FDA in April to authorize its booster vaccines for younger children, after it submitted data that indicated their shot was safe and generated a strong immune response.

Vaccine effectiveness after two doses against symptomatic infection “quickly declined for children and adolescents during omicron,” Dr. Ruth Link-Gelles, who leads the COVID-19 Vaccine Effectiveness program for the CDC’s Epidemiology Task Force, said on Thursday. A booster dose in adolescents significantly improved effectiveness – up to 71% – in the weeks and months after receiving the third dose.

Vaccine effectiveness against hospitalization after doses for children ages 5 to 11 years old hovered around 68%, to a median of 37 days after the second dose, while effectiveness stood around 51% in adolescents.

The benefits of the booster dose outweighed any known and potential risks and a booster dose can help provide continued protection against COVID-19, officials said, particularly given concerns over waning immunity.

Many panelists argue that the pandemic is not over, and continues to pose a risk to all Americans, including young children, and thus, vaccination and boosting remains critical in protecting all age groups.

“As a mother, an infectious disease specialist and a member of [the Advisory Committee on Immunization Practices]my children are older than this age cohort, however, if they were still in this age cohort, I would give my children this booster, “said Dr. Camille Kotton, clinical director in the Infectious Diseases Division at Massachusetts General Hospital.

Vaccination has provided “measurable, detectable” benefits in preventing “a wide range of health outcomes, and that includes infection, emergency department visits, hospitalization and critical illness” in adults, Dr. Matthew Daley, a senior investigator at the Institute for Health Research at Kaiser Permanente Colorado, said, asserting that the same is likely true in young children.

“It just wouldn’t make sense that 5- to 11-year-olds are the only group among the age eligible for whom a third dose isn’t necessary to achieve a more durable and effective immune response,” Daley said.

Panelists added that future boosting plans for children this fall are still unclear, and thus, providing families access to boosters now is a time-sensitive, and important, decision.

Ultimately, the goal of the vaccines is to prevent severe illness and death, asserted several panelists, who added that the benefits of vaccinating children, to protect them against severe forms of COVID-19, are clear.

“The goal is not to prevent all infections but to prevent severe illness and the data that was shown was quite good convincing that a third dose would decrease hospitalization, it would decrease MIS-C, it decreases post COVID. All of these are serious complications. that children are having. And that’s why I really do believe we should be going in this direction, “added Dr. Katherine A. Poehling, Professor of Pediatrics and Epidemiology and Prevention.

Some panelists expressed concern over the need for boosters in children ages 5 to 11 years old right now, given the fact that a large proportion of children have been recently infected with COVID-19 during the omicron surge.

Dr. Sarah S. Long, professor of pediatrics, Drexel University College of Medicine, asserted that with infection rates on the rise “now is not the time” to be boosting younger children.

“I think this is not the time to be giving boosts to 75% of children – I think the most of whom have had recent infections,” Long argued.

Other experts stressed that physicians and officials should still be focusing on vaccinating more children with their initial primary series, particularly given the nation’s recent increases in pediatric COVID-19 infections and hospitalizations.

“Boosters are great once they’ve got everyone their first round and I think that needs to be a priority in this,” Dr. Helen Keipp Talbot, Associate Professor of Medicine, Division of Infectious Diseases and Health Policy, Vanderbilt University,

Last week, more than 93,000 additional child COVID-19 cases were reported, an increase of about 76% from two weeks ago, according to a new report from the American Academy of Pediatrics and the Children’s Hospital Association.

The average number of pediatric hospital admission rates have increased by 70% in the last month, according to CDC data, and on average, nearly 180 virus-positive children are entering hospitals each day.