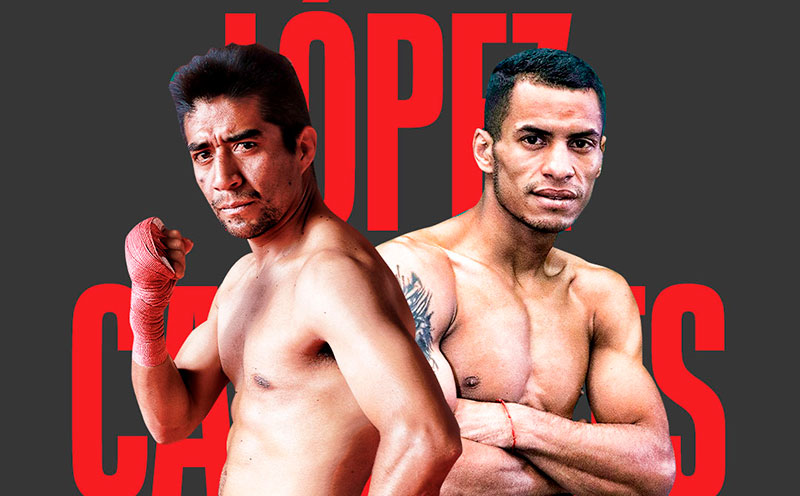 Carlos Canizales knocked Ganigan Lopez out in the fourth round Saturday night at Foro Centenario in Lopez’s hometown of Mexico City.

Canizales, who resides in Caracas, Venezuela, improves to 24-1-1 (18 knockouts).

The clash between Canizales and Lopez was a WBA junior flyweight title elimination bout. Lopez was game and utilized his ring generalship early on but Canizales’ accuracy and power overwhelmed Lopez.

Canizales began letting go of his hands in the second round. A right cross to the chin backed Lopez up, forcing him to gather himself momentarily before engaging in the fight.

Lopez hoped his southpaw style would throw Canizales off. He utilized angles to connect with straight left hands but Canizales landed with more regularity in the third round. About a minute into the fourth round, Canizales connected with a right cross to the chin, dropping Lopez to the canvas. Lopez attempted to beat the count but did not have any balance to steady himself on his feet, prompting a stoppage at 1:45.

Canizales has won his last two fights since losing via stoppage to Esteban Bermudez on May 28. After the loss to Bermudez, Canizales was dropped from The Ring Magazine top-10 rankings.

In the co-feature, strawweight Jazmin Villarino of Argentina defeated Judith Vivanco by unanimous decision. Scores were 98-92 twice and 98-93 for Villarino, who improves to 6-1-2 (1 KO).

The 19-year-old Leon, who also resides in Mexico City, made his pro debut in November 2019.

Producciones Deportivas, which is run by Ricardo Maldonado, promoted the card.

Francisco A. Salazar has written for The Ring since October 2013 and has covered boxing in Southern California and abroad since 2000. Francisco also covers boxing for the Ventura County (California) Star newspaper. He can be reached by email at [email protected] or on Twitter FSalazarBoxing.