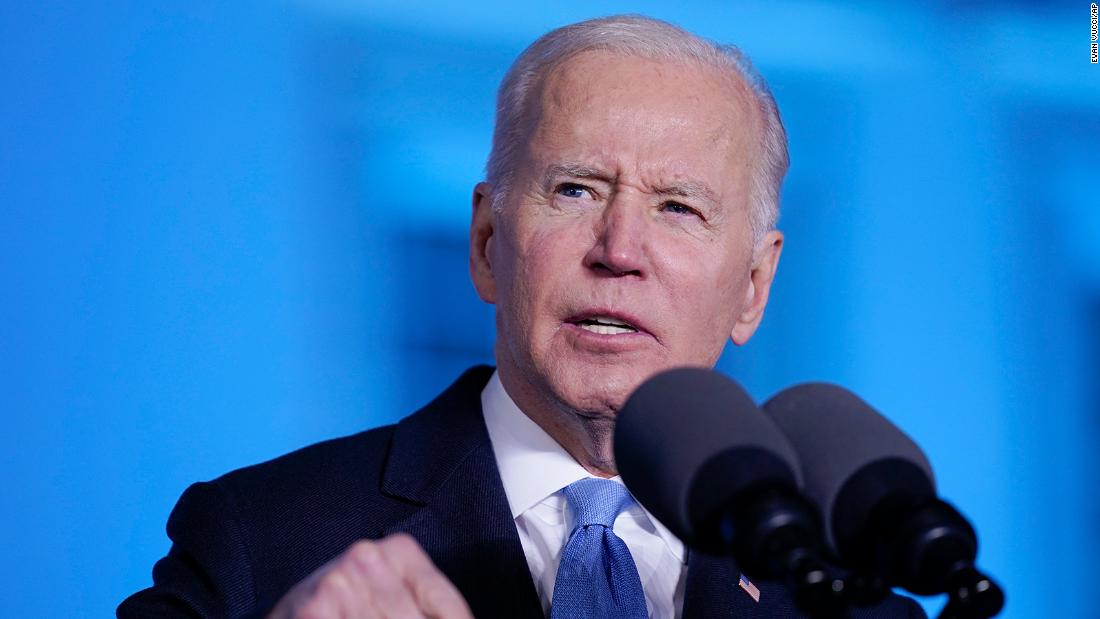 The comment, which came at the very end of a two-country visit to Europe meant to reinforce alliances, wasn’t planned and surprised aides who were watching Biden’s speech on television or at the event site. And the words hadn’t been something Biden raised as potentially including in his speech – previously, US officials were adamant that changing the government in Moscow wasn’t one of their objectives. In closed-door meetings earlier in the week, Biden told fellow leaders at NATO that he did not want to escalate the West’s confrontation with Russia.

Yet his ad-libbed line did more to pit him directly against Putin than anything so far in the conflict.

Now, Biden and White House officials are expected to face questions about the comments.

The White House took the rare step of disclosing that the president expects to address questions when he delivers remarks on his budget proposal Monday afternoon. And later Monday, economic officials will brief the press in Washington.

People who spoke to Biden before and after the speech described him as personally affected after visiting with refugees at the national stadium in Warsaw, where women asked him to pray for the men – husbands, sons and brothers – who had stayed behind to fight .

Asked by reporters traveling with the President what seeing the refugees made him think as he deals with Putin every day, Biden responded, “He’s a butcher.”

Directly ahead of the speech, the President had also been briefed by officials about a series of missile strikes on a fuel depot in Lviv, Ukraine, a western city not far from the Polish border. The timing seemed hardly coincidental as Biden was visiting Warsaw.

Despite the Biden administration’s quick walk-back of the comments about Putin’s power, they obscured the rest of Biden’s speech, which focused on reassuring NATO allies the US would come to their defense if Putin pushes further into Europe. White House aides had been working on writing the speech for days, including in the hours leading up to the address.

Vinay Reddy, Biden’s top speechwriter, and Mike Donilon, his senior adviser who helps craft the President’s major speeches, both traveled to Europe with Biden and were involved in writing the speech.

The clarification the White House issued on Saturday was at least the third time an administration official felt obliged to clean up remarks Biden made that appeared, on their own, startling and misaligned with US foreign policy.

As he was hailing the heroism of the Ukrainians, Biden told US troops, “You’re going to see when you’re there” – even though he’s vowed American forces won’t be entering the conflict directly. Afterward, a spokesman said nothing had changed: “The president has been clear we are not sending US troops to Ukraine.”

And after Biden said he would respond “in kind” to the use of chemical weapons by Russia in Ukraine, Sullivan assured reporters the United States has “no intention of using chemical weapons period, under any circumstance.”

Biden has a well-established pattern of speaking out of hand, though perhaps never with stakes so high. White House officials said before Biden’s speech the president had been working intently behind the scenes to reinforce cooperation among his counterparts.

“He sleeps way less on these kinds of trips than maybe other trips because he’s just going, going, going – like, wants to talk to the next leader; you know, take the next briefing,” Sullivan said Friday midway through Biden’s flight. from Brussels to Rzeszów, in southeastern Poland, where he was meeting with American soldiers.

Europe is still measuring its reaction to Biden’s remarks

It remains to be seen exactly how the remark will affect the conflict. A European diplomat suggested Biden’s statement would not have had a broader impact on the Kremlin’s handling of the war.

“(The Russians are) going to worry if we start bringing tanks into Ukraine. They won’t care about this,” the diplomat said.

The diplomat also told CNN, “Biden said something a lot of people believe.”

“In the short term, it might be a bit uncomfortable, but it could be a bit helpful for the Russians to know. … Ultimately, Putin can’t stay in power, right? He’s made a decision to invade another country and he’s breaking all sorts of legal agreements he’s signed up (for), “they said.

A defense official from a Baltic country was pleased to hear Biden’s comments, saying, “The West should not be afraid to be ambiguous. It would have given some in Russia hope that the regime can change.”

“Russia is always ambiguous, always blurs lines between war and peace. We should also exercise that more,” the defense official added.

A European official whose office has engaged with Putin recently said they did not believe Biden’s comments would complicate things, but it’s difficult to say for certain. “At least (we) haven’t noticed a difference,” the official said. “We probably need to see but so far haven’t noticed anything different.”

Officially, the Kremlin’s response came from spokesman Dmitry Peskov, who said the fate of the Russian ruler is “not to be decided by Mr Biden.”

Peskov then said on Monday that the comments “are certainly causing concern,” adding, “We will continue to closely monitor the statements of the US President. We will carefully note them and will continue to do so.”

Oksana Markarova, Ukraine’s ambassador to the US, told NBC News’ “Meet the Press” on Sunday, “We heard President Biden loud and clear, that the US will aid and will be with Ukraine in this fight.”

“We clearly understand in Ukraine that anyone who’s a war criminal, who attacks a neighboring country, who’s doing all these atrocities together with all the Russians that are involved definitely can’t stay in power in a civilized world. Now, it’s all up to all of us to stop Putin, “she added.

French President Emmanuel Macron – who said last week that France was “stepping up” the work to prevent escalation of the war in Ukraine but has ruled out the French military’s direct participation – suggested Biden’s comments were not helpful for diplomatic efforts.

“I wouldn’t use terms like that because I’m still in talks with President Putin,” Macron said during an interview on Sunday with French Channel France 3.

“Our goal is to stop the war Russia launched in Ukraine, while avoiding a war and escalation,” the French president added.

On the domestic front, Democrats largely repeated the White House’s clarification. But some Republicans criticized the president for the off-the-cuff comments.

As he praised Biden’s speech in Poland, Idaho Sen. Jim Risch, the top Republican on the Senate Foreign Relations committee, told CNN’s “State of the Union” on Sunday, “There was a horrendous gaffe right at the end of it. I just wish he would stay on script.”

“This administration has done everything they can to stop escalating,” Risch said, adding, “There’s not a whole lot more you can do to escalate than to call for regime change.”

Rep. Michael McCaul, lead Republican on the House Foreign Affairs Committee, told “State of the Union,” “I know it was off the cuff, but whatever the President says, it carries a lot of weight. … In this case, it sends a very provocative message to Mr. Putin. “