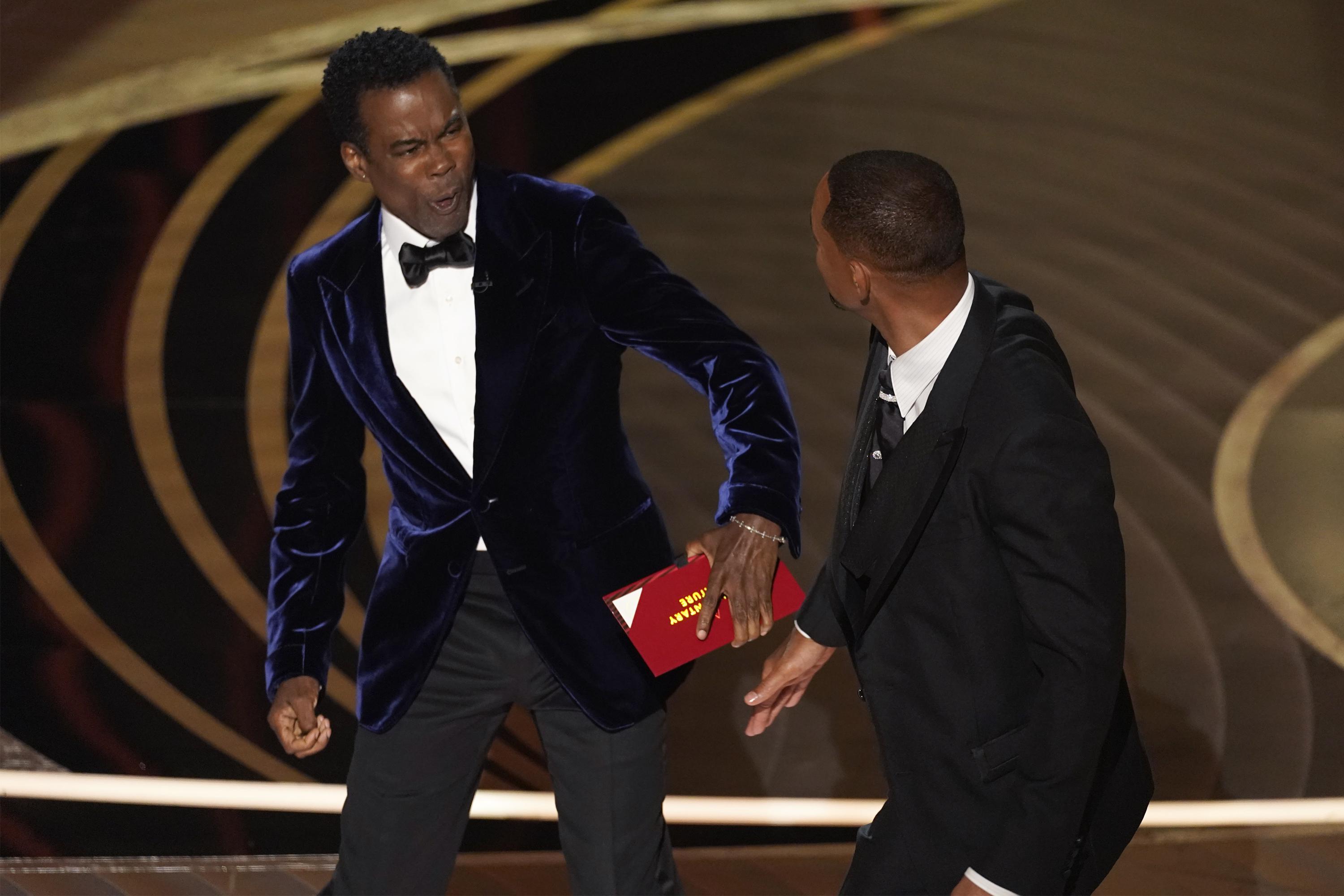 LOS ANGELES (AP) – After a movie year often light on crowds, the Academy Awards Named an unabashed crowd-pleaser, the deaf family drama “CODA,” best picture Sunday, handing Hollywood’s top award to a streaming service for the first time in a ceremony that saw the greatest drama when Will Smith strode onstage and slapped Chris Rock..

Sian Heder’s “CODA,” which first premiered at a virtual Sundance Film Festival in winter 2021, started out as an underdog but gradually emerged as the Oscars’ feel-good favorite. It also had one very deep-pocketed backer in Apple TV +, which scored its first best picture Academy Award on Sunday, less than three years after launching the service.

It also handed another near-miss defeat to Netflix, the veteran streamer that for years has tried vainly to score best picture. Its best chance, Jane Campion’s “The Power of the Dog,” came in with a leading 12 nominations. It won one, for Campion’s direction.

But “CODA” rode a wave of goodwill driven by its cast including Marlee Matlin, Troy Kotsur, Emilia Jones and Daniel Durant. It’s the first film with a largely deaf cast to win best picture. “CODA” managed that despite being one of the least-nominated films with only three coming into Sunday. Not since 1932’s “Grand Hotel” has won a movie best picture with fewer than four nods.

Kotsur also won best supporting actor to become the first male deaf actor to win an Oscar, and only the second deaf actor to do so, joining his castmate and “CODA” co-star Matlin.

“This is for the Deaf community, the CODA community and the disabled community,” said Kotsur, signing off the stage. “This is our moment.”

Many, though, were talking about another moment. After Rock, as a presenter, joked to Jada Pinkett Smith that he was looking forward to a sequel to “GI Jane,” Will Smith stood up from his seat near the stage, strode up to Rock and smacked him. After sitting back down, Smith shouted at Rock to “keep my wife’s name out of your (expletive) mouth.” When Rock, who joked about Jada Pinkett Smith while hosting the Oscars in 2016, protested that it was just a “GI Jane” joke, Smith repeated the same line.

“That was the greatest night in the history of television,” Rock said, before returning awkwardly to presenting the best documentary, which went to Questlove’s “Summer of Soul (… or When the Revolution Was Not Televised).”

The moment shocked the Dolby Theater audience and viewers at home. At the commercial break, presenter Daniel Kaluuya came up to Hug Smith, and Denzel Washington escorted him to the side of the stage. The two talked and hugged and Tyler Perry came over to talk as well.

Smith, who plays Venus and Serena Williams’ father in “King Richard,” later in the show won Best Actor, his first Oscar. It meant Smith again took the stage shortly after what seemed likely to be one of the most infamous moments in Academy Awards history. His acceptance speech vacillated between defense and apology.

“Richard Williams was a fierce defender of his family,” Smith said in his first remarks. He continued: “I’m being called on in my life to love people and to protect people and to be a river to my people.”

Smith then shared what Washington told him: “At your highest moment, be careful because that’s when the devil comes for you.”

Ultimately, Smith apologized to the academy and to his fellow nominees.

“Art imitates life. I look like the crazy father, ”said Smith, chuckling. “But love will make you do crazy things.”

Up until then, the show – fashioned as a revival for the Oscars and the movies – had been running fairly smoothly. Ariana DeBose became the first Afro-Latina and openly LBGTQ actor to win an Academy Award for supporting actress. Jane Campion won the Oscar Best Director for “The Power of the Dog,” her open-plains psychodrama that twisted and upended western conventions.

Campion, who had been the first woman ever twice nominated in the category (previously for 1993’s “The Piano”), is only the third woman to win Best Director. It’s also the first time the directing award has ever gone to women in back-to-back years, after “Nomadland” filmmaker Chloé Zhao won last year.

Best actress went to Jessica Chastain, who also won her first Oscar. Chastain won for her empathetic portrayal of the televangelist Tammy Faye in “The Eyes of Tammy Faye,” a movie she also produced.

After record-low ratings and a pandemic-marred 2021 show, producers this year turned to one of the biggest stars around – Beyoncé – to kick off an Oscars intended to revive the awards’ place in pop culture. After an introduction from Venus and Serena Williams, Beyoncé performed her “King Richard” nominated song, “Be Alive,” in an elaborately choreographed performance from a lime-colored, open-air stage in Compton, where the Williams sisters grew up.

Hosts Wanda Sykes, Amy Schumer and Regina Hall then began the telecast from the Dolby Theater.

Sykes, Schumer and Hall breezily joked through prominent Hollywood issues like pay equity – they said three female hosts were “cheaper than one man” – the Lady Gaga drama that Sykes called “House of Random Accents,” the state of the Golden Globes (now relegated to the memoriam package, said Sykes) and Leonardo DiCaprio’s girlfriends. Their most pointed political point came at the end of their routine, in which they promised a great night and then alluded to Florida’s “Don’t Say Gay” bill.

“And for you people in Florida, we’re going to have a gay night

The first broadcast award went, fittingly, to Ariana DeBose, whose win came 60 years after Rita Moreno won for the same role in the 1961 original “West Side Story.” DeBose thanked Moreno for leading the way for “tons of Anitas like me.”

“You see an openly queer woman of color, an Afro-Latina, who found her strength and life through art. And that is, I think, what we’re here to celebrate, ”said DeBose. “So if anyone has ever questioned your identity or you find yourself living in the gray spaces, I promise you this – there is indeed a place for us.”

“Encanto,” the Disney hit propelled by its chart-topping soundtrack, won the best animated film. Lin-Manuel Miranda, who penned the film’s hit songs, missed the ceremony after his wife tested positive for COVID-19. Ryusuke Hamaguchi’s three-hour Japanese drama “Drive My Car,” one of the most acclaimed films of the year, won for best international film.

After two years of pandemic, and beneath a warm California sun Sunday, the Hollywood rite of glamor again got into swing, with a flush red carpet and a COVID-tested audience. Before the exchange with Smith, Rock commented, with relish: “No one’s wearing a mask. Just breathing raw dog tonight. ”

To help regain the cultural spotlight, the Oscars leaned heavily on musical performances (Billie Eilish, Reba McEntire), film anniversaries (“The Godfather,” “Pulp Fiction,” “White Men Can’t Jump”) and as many mentions of the “Encanto” breakout song, “We Don’t Talk About Bruno,” as possible. The Ukrainian-born Mila Kunis led a 30-second moment of silence for Ukraine. Some stars, like Sean Penn, had lobbied the academy to have Ukrainian President Volodymyr Zelenskyy speak at the ceremony.

But aside from a few blue ribbons spotted on the red carpet, politics were seldom center stage. The Oscars instead doubled down on razzle dazzle, and the movies as an escape. Producers brought in the likes of BTS and Tony Hawk to rope in more viewers. Some things worked better than others. Fan favorite prizes, as voted on by Twitter users were overrun by Zack Snyder fans, who voted up Snyder’s version of “Justice League” and his “Army of the Dead.”

Eilish and her brother Finneas, won for their Bond theme to “No Time to Die,” a song that was released before the pandemic began. The film was subsequently delayed several times.

The Academy Awards got underway Sunday off-camera, with the first eight awards on the night being handed out at the Dolby Theater before the start of the ABC telecast. The Dolby was largely full in time for the 7 pm EDT pre-show, dubbed the “golden hour” by the academy. Speeches were later edited into the broadcast.

“Dune” got out to an early lead in those early awards, and it kept it through the night. The biggest blockbusters of this year’s 10 best-picture nominees, “Dune” won a leading six awards, for production design, cinematography, editing, visual effects, sound and Hans Zimmer’s score.

Greig Fraser’s cinematography win denied one chance for Oscar history. Some had been rooting for Ari Wenger, who lensed Jane Campion’s “The Power of the Dog,” to become the first woman to win best cinematography, the sole Oscar category that has never been won by a woman in the Academy Awards’ nine decade-plus history

Best makeup and hairstyling went to Linda Dowds, Stephanie Ingram and Justin Raleigh for “The Eyes of Tammy Faye.” Chastain had been among the many academy members who thought all the awards should have been handed out live during the broadcast. Chastain hugged each winner as they took the stage.

Behind this year’s telecast changes was alarm over the Oscars fast-falling ratings. While drops have been common to all major network award shows, last year’s show attracted only about 10 million viewers, less than half of the 23.6 million the year before. A decade ago, it was closer to 40 million. Ratings will provide their own verdict Monday.

Ernesto Castro
Mets’ Francisco Lindor hopes two-homer game, hot bat is sign of things to come
The Biggest Oscar Snubs and Surprises: From ‘Power of the Dog’ to Zack Snyder