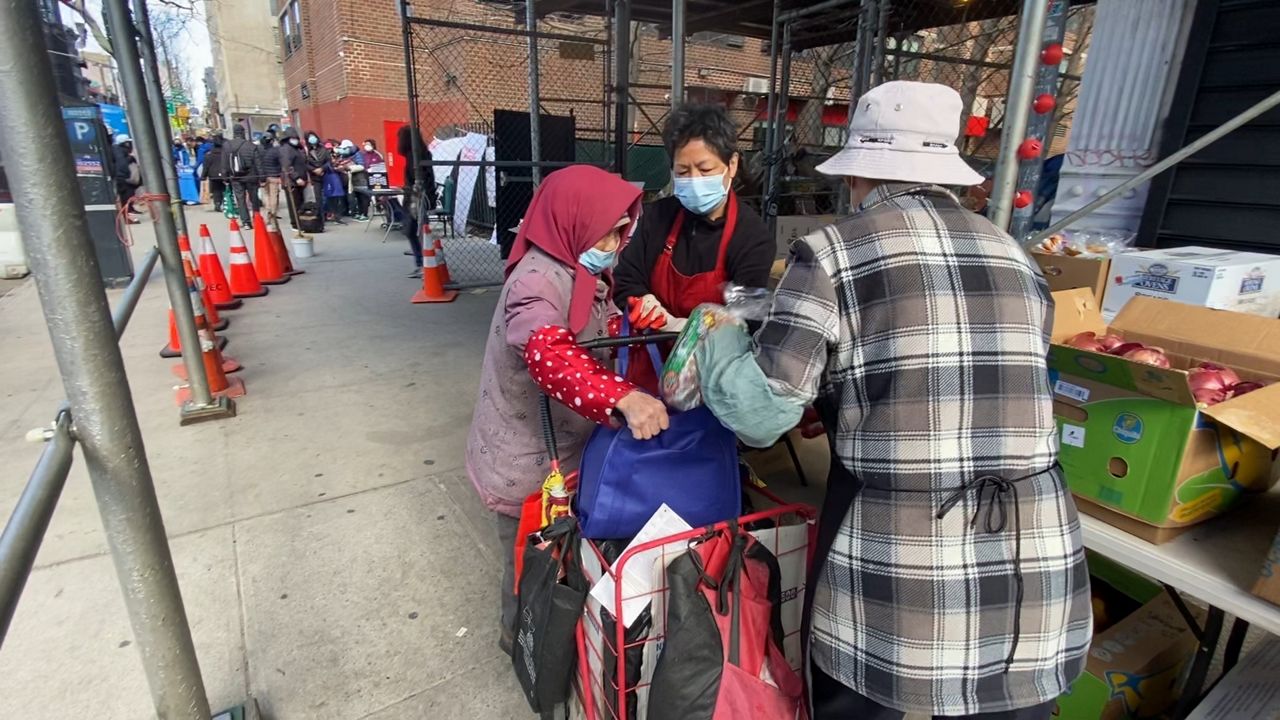 With its sidewalk grocery displays, dim sum restaurants and giant-sized bubble tea offerings lining the streets, Chinatown is a popular destination for people looking to satisfy their food cravings.

But when the pandemic hit, many of the neighborhood’s long-time Chinese residents were worried about accessing food.

Wai Ying Chin, who said she moved to the United States in 1967, wasn’t sure how she was going to get food for herself and her mom.

The 84-year-old is the sole caregiver of her 107-year-old mother in their third floor walkup on Elizabeth Street.

“We were worried,” Chin said through a translator. “When we heard that the grocery store right below [us] was going to close, we went and lined up and stocked up on food. “

Food insecurity was the No. 1 concern cited by Asian American New Yorkers during the pandemic, according to findings of a recently released study by the NYU Center for the Study of Asian American Health.

For Chin and so many others, concerns were largely around access to supermarkets at first. But as the pandemic has lingered on, economic instability and fear of discrimination continue to keep food insecurity at the forefront for so many in the Asian community, experts say.

People reported needing help accessing food and having to change their food habits, including using food banks, or rationing and skipping meals.

It’s why a number of community groups across the city began organizing food pantries or expanded existing food pantry services to meet the growing demand.

UA3, a nonprofit formerly known as the United Asian American Alliance, began organizing food drives when the pandemic first hit in March 2020, according to Chi Loek, the executive director of the organization.

They started organizing food delivery to front-line workers, but quickly realized the growing need for food in the Asian community, particularly among Asian seniors.

The twice-a-week pantry on Grand Street in Chinatown, which serves about 2,000 families each week, usually has a long line. But before they switched to an appointment system, they dealt with even longer lines with people crowding close together to avoid people cutting in line, organizers said.

“During the pandemic, food insecurity was one of the primary [issues] because – not many people realize that – for immigrants, undocumented individuals, they are not eligible for government subsidies, ”Loek said. “If you’re unemployed, you don’t have enough savings and you are not able to afford fresh vegetables. They are the most expensive, sold-out food items. “

Asian Americans in New York City have some of the highest poverty rates of any ethnic group in the city, according to city data. When COVID-19 first hit the city, Asian workers were one of the hardest hit sectors of the workforce, data shows. Still, the issue of food scarcity in the Asian community was unexpected among researchers.

“I focus on nutrition and cardiometabolic disparities among Asian Americans, but I was surprised because there really was no other data indicating this – that food was a problem,” said Stella Yi, associate professor at the NYU Grossman School of Medicine and one of the lead researchers of the NYC COVID-19 Community Health Resources and Needs Assessment.

Advocates say food insecurity overall is a largely underrecognized issue in the community.

One reason for that is the pervasive cultural stereotype of the Asian community as a “model minority,” or well-educated and upwardly mobile, experts say.

In New York City, one in four Asian adults lived in poverty in 2020, a rate significantly higher than the citywide average of 16%, according to a report released Tuesday by Columbia University and New York-based nonprofit Robin Hood.

This was the first time the organization’s annual poverty report was able to expand its data collection, including research conducted in Mandarin, to better represent Asian New Yorkers, and “this spotlight presents results from this novel data,” the report states.

Asian Americans are among “the most understudied racial and ethnic groups in the US,” according to the report.

This lack of data is another reason why the issue of food insecurity among Asian Americans has only recently begun to surface, Yi said.

“They’re just missing,” Yi said. “They’re invisible in the data, whether it’s electronic health record data or surveillance data or, in this case, in surveys that are only conducted in English.”

The language barrier is one of the biggest reasons Asians are underrepresented in data, experts say.

For the NYU study, which came out in March, researchers collaborated with about 25 community organizations, including CACF and CPC, to conduct the survey in 10 languages.

Fifty percent of the 1,200 respondents took the survey in a language other than English, Yi said.

“It fills that gap of highlighting what the lower income, less English proficient, less plugged in folks are actually experiencing during the pandemic,” she said of the study.

Fear of discrimination amid a rise in anti-Asian attacks was one of the main issues advocates point to as a reason for increasing food insecurity.

Many Asian New Yorkers, especially the elderly, remain homebound, due to fears around the virus as well as attacks, making it much more difficult to access food and other services, they said.

Eighty percent of respondents in the NYU study said they changed their behaviors as a result of rising fears of attack. This included avoiding public transportation and grocery stores, Yi said.

“If you compound that fear of going out with food security – they’re interrelated,” she said. “That’s something that has really been magnified during the pandemic.”

Another issue advocates point to is the lack of culturally appropriate food items within existing food pantries and other governmental assistance programs.

Yi said researchers were aware of the lack of culturally appropriate food options as contributing to the issue, but that “it really came out [during the study] Because we were hearing things, like, people don’t even want to sign up. “

The rising costs of groceries, largely due to inflation, which hit 8.5% in March, the highest since 1981, is another factor leading to the reliance on community food pantries.

“Now grocery [shopping]buying fresh fruit and vegetables is a lot more expensive, ”said Kin Wah Lee, one of the co-founders of UA3.

“We actually have a lot more people coming here because food is getting a lot more expensive,” she went on to say.

Chin, the 84-year-old caregiver of her centenarian mother, found out about UA3’s food pantry last summer, she said. It’s the first time she’s ever relied on food donations.

Though many of the people utilizing the food pantry bring their own carts, Chin walks the roughly 10 blocks from her apartment with only tote bags on hand to collect her food items.

Her mother, who turns 108 in August, is in good health, she said. Chin usually takes home a couple heaping bags of groceries, which sometimes includes hot meals, but it’s the large tin of oatmeal that her mother really appreciates.

“It’s been helpful that they’ve been giving me a lot of food, and my mother loves oatmeal,” she said.