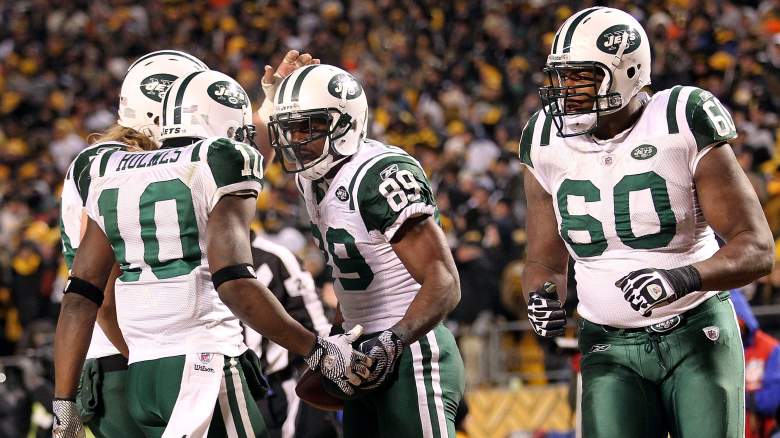 All of the New York Jets’ organized activities are finished until training camp.

Now we are in the midst of the true lull of the offseason. Literally, nothing is happening right now and we are now in hibernation for the next six weeks.

However, we never take a break from a mailbag Monday with our two experts Paul ‘Boy Green’ Esden Jr and Michael Obermuller.

ALL the latest Jets news straight to your inbox! Join the Heavy on Jets newsletter here!

Ring of Honor, Other Pressing Questions

1. We just heard about some recent additions to the Jets Ring of Honor coming up later this season, but who is the biggest snub that isn’t in, that should be?

This is a tough one for me. Admittedly, I am a younger fan (28 years old) and not much of a historian. I focus on the present and although I am aware of the past, I try not to focus on it.

Having said that, one of my personal favorites was always wide receiver Jerricho Cotchery.

Not only did he have over 4,500 yards with the team, but he also came up clutch when it counted most. Cotchery embodied the grit and strength of will that turns an NFL franchise into a winner. If the team had a starting lineup full of personalities like him, I guarantee they’d be a contender again.

I’m a 29-year-old fan that absolutely prides himself on the history of the game. I’ve seen the film on Super Bowl III at least a half dozen times.

The Ring of Honor for the Jets has plenty of deserving candidates that are on the outside looking in, which makes the empty ballots over the last few years strange.

Up to the most recent announcement of Darrelle Revis, Nick Mangold, and D’Brickashaw Ferguson there hasn’t been a new induction into the Ring of Honor since 2017 (Kevin Mawae). What gives?

One player that perfectly embodies what the Ring of Honor is all about is wide receiver Jerricho Cotchery. He will never go into the Pro Football Hall of Fame, however, his place in the Ring of Honor shouldn’t be in question.

Since 2007 only three Jets receivers have eclipsed 1,000 yards receiving. Cotchery did it in that campaign which was a career year for him (1,130) and then a pair of receivers did it in 2015 (Brandon Marshall, Eric Decker).

It is ridiculous that Cotchery isn’t in. Beyond the stats, he displayed toughness, grit, and was the go-to guy in key situations. Some of those clutch playoff moments will live forever in the minds of Jets fans everywhere in those 2009 and 2010 seasons.

2. Who will lead the Jets in receiving touchdowns in 2022?

Trivia question for readers, who led the franchise last season? I think (and hope) we see a lot more receiving touchdowns this year and I think the tight ends will play a large role in that.

The only problem with this theory is whether or not CJ Uzomah and Tyler Conklin steal TDs from one another, dropping both of their totals. If a clear starter emerges or an injury occurs, my answer is the starting tight end.

If not, I’ll say running back Breece Hall, who excels as a pass-catcher. This wide receiver room is diverse and I think the stats will reflect that. PS If you had Elijah Moore with five receiving touchdowns in the trivia above, you win!

Tight ends are a really smart way to go especially with their size and ability in the red zone. However I’ll go with another bit of trivia, when is the last time a Jets player led the team in touchdowns in back-to-back seasons?

Believe it or not, it isn’t that long ago. Wide receiver Jamison Crowder accomplished that feat from 2019 to 2020 with six touchdowns in each of those campaigns. Technically seven in 2020 because Crowder tossed a touchdown in that season as well.

Moore had six last season if you also include his rushing touchdown and I believe he will double dip in 2022. So not only did a rookie lead the team in touchdowns which are impressive on the surface but when you consider he only played in 11 games it is even crazier.

I’m predicting a much stronger bill of health for Moore next season and a complete immersion into superstardom.

3. Robert Saleh had a passionate speech on Flight 2022 about closing the gap in the AFC East, what do you predict will be their divisional record next season?

I loved the passion from Saleh and he’s 100% right, it does have to change. If you don’t win inside your division in the NFL, you don’t win period. That’s just the way it is.

My prediction is 3-3. Not great, but a massive improvement on the past five years.

I believe they must at least split with the New England Patriots and Miami Dolphins. If you can steal one from the Buffalo Bills, that’s a real accomplishment. Call me crazy but it might be more realistic that the Jets sweep the Pats in 2022.

I mean how can you not watch that video and be ready to run through a wall?

The secret sauce to turn around the Jets is actually handling your business inside the division. Everyone always circles games outside of the norm, but the divisional games basically count twice.

I recently went through all the recent struggles inside the division, you won’t believe some of the statistics cited here.

I’m going to make a similar dive as my brethren and say 3-3. That would be a monster improvement, especially considering they’re currently on a 0-12 drought inside enemy lines. The Miami Dolphins and New England Patriots are winnable and Gang Green has played the Buffalo Bills tight situationally.

4. What is something we’ll be saying at the conclusion of the 2022 season confidently about the New York Jets?

How about, coach Saleh is the long-term leader of this franchise? I truly loved this hire and I know year one had its rocky moments but let’s be honest, the Jets practically told us there would be adversity ahead of the season.

The roster just wasn’t good enough and once the injuries occurred, the depth and experience were not there.

When I hear Saleh talk, see him coach, and hear others talk about him, I just feel very confident that he is the guy. He’s humble, relatable, likable, intelligent, intense but kind, and most of all, inspiring. Saleh has the brains and the personality to bring life back into this franchise and I think the defense pulls a full 180 in year two.

I like that choice and it’s a juicy one.

I’ll take the bait and say Zach Wilson is the unquestioned guy. I’m not predicting an MVP trophy by the end of the 2022 season (although that’d be nice), but I’m saying there won’t be any more questions.

I believe he is going to do enough to win everyone over and for the first time in a while, fans will feel strongly about the direction of the franchise. Wilson has all the talent in the world but it is about realizing said potential and delivering.

With all the weapons on this team, the former BYU passer is going to blossom in front of all of us.

5. If any Jets player was going to be in the running for a major NFL award, who would it be and why?

It’s kind of a basic answer but I think it could be the most likely. Breece Hall wins offensive rookie of the year.

He’s already one of the favorites to win the award and the Jets should utilize a run-first offense under Mike LaFleur. It’s a match made in heaven and considering this is an incredibly weak quarterback class, the expectation is that a skill position player should win the honor in 2022.

Hall is a dual-threat and he should get a whole bunch of touches. Frankly, there are only a couple of rookies that I think are better positioned to defeat him if all goes well.

That is a really solid answer and definitely has the potential of happening. That would be the first offensive Rookie of the Year in Jets history, a fun fact.

I’ll go comeback player of the year and hand it to Carl Lawson. According to media members and people inside the Jets building, Lawson was set to light the NFL world on fire last year.

However, he was robbed of that opportunity due to a torn Achilles. I’ve spoken with his personal trainer who helped restore him back to full health, he is a man on a mission in 2022. If he can be half the player that he was projected to be last season, the Jets will be in an amazing spot!