Analysis: A far-right battalion has a key role in Ukraine’s resistance. Its neo-Nazi links have given Putin ammunition

Home /World/Analysis: A far-right battalion has a key role in Ukraine’s resistance. Its neo-Nazi links have given Putin ammunition 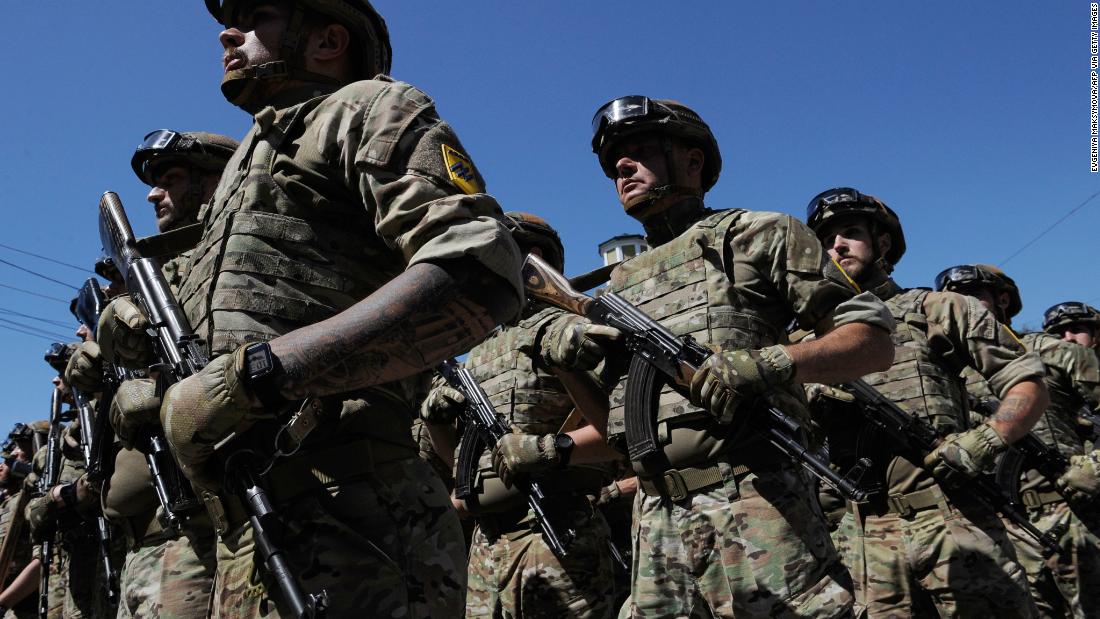 In a speech broadcast minutes before the invasion began on February 24​, Putin said: “We will seek to demilitarize and denazify Ukraine,” ignoring the fact that the country’s president, Volodymyr Zelensky, is Jewish.

For the Kremlin, Exhibit A in this special mission is the far-right Azov movement, part of the military and political landscape in Ukraine for nearly a decade. ​

Azov’s military and political wings formally separated in 2016, when the far-right National Corps party was founded. The Azov battalion had by then been integrated into the Ukrainian National Guard.

An effective fighting force that’s very much involved in the current conflict, the battalion has a history of neo-Nazi leanings, which have not been entirely extinguished by its integration into the Ukrainian military. ​

In its heyday as an autonomous militia, the Azov Battalion was associated with White supremacists and neo-Nazi ideology and insignia. It was especially active in and around Mariupol in 2014 and 2015. CNN teams in the area at the time reported Azov’s embrace of neo-Nazi emblems and paraphernalia.

After its integration into the Ukrainian National Guard, amid discussions in the US Congress about designating the Azov Movement a foreign terrorist organization, Ukraine’s then minister of internal affairs, Arsen Avakov, defended the unit. “The shameful information campaign about the alleged spread of Nazi ideology (among Azov members) is a deliberate attempt to discredit the ‘Azov’ unit and the National Guard of Ukraine,” he told the online newspaper Ukrayinska Pravda in 2019.

The battalion still operates as a relatively autonomous entity. It has been prominent in defending Mariupol in recent weeks.

For Moscow, Azov presents an obvious target. Russian officials have given it an outsize role in the conflict, routinely accusing it of human rights abuses.

On March 7, Russia’s ambassador to the United Nations blamed the Azov regiment for blocking an evacuation corridor in the besieged port city, saying they were using “citizens as a human shield.” That claim has been repeated consistently in Russian media.

The same day, Azov major Denis Prokopenko said in a video shared on the regiment’s Twitter account that the “attempts to organize a safe corridor for the (relocation) of civilian people… failed because of several actions of the enemy (Russian forces) in the assembly area.”

After the bombing of a Mariupol theater that was sheltering civilians and had “children” written in Russian on the ground on either side of the building, the Russian Defense Ministry accused “militants of the nationalist ‘Azov’ battalion” of carrying out the attack. ​

The existence of an identifiably Azov element within the Ukrainian armed forces — and an effective element at that — poses uncomfortable questions for the Ukrainian government and its Western allies, which continue to send arms to the country.

CNN has reached out to ​Ukraine’s defense ministry for comment.

In the not-too-distant past, Azov’s leadership openly espoused ​White supremacist views and cultivated links with similarly minded groups and individuals in the West.

In 2010, Andriy Biletsky, now leader of the National Corps, the Azov movement’s political wing, reportedly said his goal was to “lead the White races of the world in a final crusade,” according to the Guardian.

Despite the Azov movement’s international notoriety, Ukraine “is not a cesspit for Nazi sympathizers,” according to Alexander Ritzmann, a senior adviser at the Counter Extremism Project (CEP), based in Berlin.

He noted that in the last elections in Ukraine in 2019, Azov’s political wing only won 2.15% of the vote, and Biletsky lost his seat in parliament.

Plus — Ritzmann says — there are far-right actors prominent in Russia, too. “There is a far-right extremist problem on both sides in the conflict, but there seems to be a bias in only reporting on Ukraine’s far-right problem,” he said.

The Azov Battalion was formed in 2014, the same year Russian-backed rebels began seizing territory across Ukraine’s eastern Donbas region, and Russia invaded and captured Crimea. At the time, Ukraine’s Ministry of Defense encouraged volunteer battalions to join the resistance campaign and help its struggling army.

The battalion’s role in recapturing Mariupol in June 2014 from Russian-backed forces brought it “hero status” in Ukraine, said Ritzmann.

But that status came with baggage — the far-right views of some members and neo-Nazi insignia. These included the black sun, “a pagan symbol appropriated by Nazis for their pseudo-religion,” and the Wolfsangel, “a symbol that far-right extremists have also adopted,” Ritzmann said.

Azov’s leaders have denied the neo-Nazi associations, saying the Wolfsangel “N” and “I’ mean “national idea.”

Even though the Azov Battalion was co-founded by Biletsky, who previously led the radical right group Patriot of Ukraine, the group was armed by the state and partly funded by local oligarchs in eastern Ukraine. That funding included money from the Jewish tycoon Ihor Kolomoisky, Ritzmann said. The US State Department sanctioned Kolomoisky in March 2021. The previous year, the US Justice Department placed him under investigation on accusations of embezzlement and fraud. ​

CNN has reached out to Kolomoisky’s lawyer for comment.

In 2016, the United National High Commissioner of Human Rights accused armed groups on both sides of the Donbas conflict, including Azov, of human rights abuses.

When the Azov Battalion was brought under the command of the Ministry of Internal Affairs as a regiment in 2014, “politically motivated fighters like (Andriy) Biletsky left and founded the Azov movement so they can do their ultra-nationalist, far-right work, which they were not allowed to do in the Ukrainian military,” Ritzmann said.

The political party Biletsky formed, the National Corps, which the US Department of State described in 2018 as a nationalist hate group, “is essentially the spine of what we today call the Azov movement,” Kacper Rekawek, a research fellow with the Center for Research on Extremism (C-REX) at the University of Oslo, told CNN.

“The Azov movement is a dangerous key player of the transnational extreme-right and has served as a network hub for several years now, with strong ties to far-right extremists in many European Union countries and the United States,” Ritzmann said.

Olena Semenyaka, the head of the National Corps’ international department, attended a festival in 2018 organized by German neo-Nazis; and in 2019 she spoke at the far-right Scanza Forum in Sweden alongside British neo-Nazi Mark Collett.

Since forming in 2014, the ​Azov movement has grown to include a militia, summer camps for kids and paramilitary training centers. It runs activities, including music festivals, political events and mixed-martial-arts tournaments, as it promoted itself in the international far-right space.

The National Corps has repeatedly demonstrated its disdain for liberal values in its treatment of minority groups — with few repercussions.

A 2018 US State Department report found that the movement’s militia “attacked and destroyed a Romani camp in Kyiv after its residents failed to respond to their ultimatum to leave the area within 24 hours,” in full view of the local police.

While the far-right worldview of the Azov movement is clear, there has been an intense debate on whether the Azov Battalion should be classed a “foreign terrorist organization” by the US Department of State.

“People always assume it (the Azov regiment and Azov movement) is one Death Star,” Rekawek said. “Year by year, the connections (between the regiment and the movement) are looser,” he said, explaining that the battalion’s ranks now include Ukrainians who have no affinity with its neo-Nazi past.

Ritzmann says the far-right element in Ukraine’s army is no different to what’s been detected in other militaries, such as in Germany and the US.

“Presumably, far-right extremists serve in the Ukrainian military as they do in all other militaries — valid data regarding the exact numbers are not available,” he said.

“Back in 2015, the Azov Regiment itself claimed to have between 10% and 20% far-right extremists in their ranks,” but those figures are possibly smaller today, he said.

But the regiment still uses the Wolfsangel symbol, and leaders of the Azov movement, who used to be commanders in the unit, continue to visit it, said Oleksiy Kuzmenko, a Ukrainian-American investigative journalist focusing on the Ukrainian far-right.

Kuzmenko points out that as of 2021, the regiment was “actively involved in the training of the movement’s youth leaders,” and its website has a link to the movement’s YouTube channel.

“Ukraine and (the) West’s inaction on these issues paved the way for Putin to quite literally weaponize them against Ukraine in an attempt to justify his aggression,” Kuzmenko said.

“While it’s correct to point (out that) Ukraine’s far-right has minimal electoral support, they (Azov) have enjoyed near impunity for violence aimed at minorities, were unchecked in their efforts to build influence in military and security forces, and have been normalized by Ukraine’s senior leaders,” he said.

Since it formed, the Azov movement has recruited foreign fighters motivated by White supremacism to fight in Ukraine, experts say. Russia’s full-scale invasion of the country, and Zelensky’s call for foreign volunteers to join the fight, have raised concerns about radicalization in the war.

“My concern is that people, especially far-right extremists in Europe, (will gain) combat experience and training in the Ukrainian theater and then use that for terrorist attacks in Europe proper,” Colin P. Clarke, senior research fellow at the New York- based ​foreign policy research nonprofit the Soufan Center, told CNN.

In 2020, Buzzfeed reported that Ukraine deported two members from the US-based neo-Nazi group the Atomwaffen Division, who were trying to gain combat experience with Azov.

For its part, Russia also has a thriving ultra-nationalist scene that is tolerated by the authorities.

The Russian Imperial Movement (RIM), an extreme-right militia based in St. Petersburg, ​was, in 2020, the first White supremacist group to be categorized as “Specially Designated Global Terrorists” by the US State Department. While the RIM has worked in opposition to Putin’s regime, it has supported the Russian side in the war against Ukraine — training Russian militants to join pro-Russian separatists in the conflict, according to the Center for International Security and Cooperation (CISAC) at Stanford University.
“They have never confronted their own nationalists,” said Rekawek. ​Experts say Russia has also been a player in Europe’s far-right space, with France’s Marine Le Pen and Italy’s Matteo Salvini enjoying close links with Putin before the 2022 invasion.
And of the “few hundred western individuals with extreme right-wing or ‘nationalist’ convictions” who traveled to fight in the Ukraine conflict around 2014, “most of those extremist volunteers fought on the side of the pro-Russian separatists,” according to a CEP report published in March.

Ritzmann has found pro-Russian groups calling for volunteers in his research. This includes “the Russian security contractor Wagner Group, which has a history of displaying Nazi insignia,” he said in the CEP report.

But amid the tide of millions of refugees and untold damage to Ukrainian cities, some experts say Russia’s fixation on a minor player like the Azov movement serves a purpose — allowing the Kremlin to frame the conflict as an ideological and even existential struggle. However remote from reality that may be.