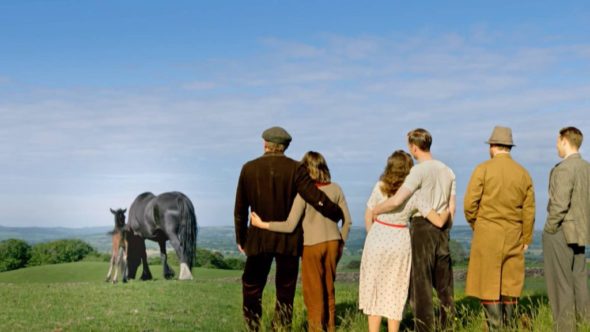 All Creatures Great & Small is returning for its third season on PBS’ Master piece in early 2023. Starring Nicholas Ralph, Samuel West, Anna Madeley, Rachel Shenton, and Callum Woodhouse, the drama series follows a group of veterinarians in a small town in England. The season will pick up in Spring 1939. The drama has already been renewed for a fourth season.

James Herriot is back with new creatures and crises in All Creatures Great and Small Season 3, premiering Sundays, Jan. 8–Feb. 19, 2023, 9/8c, on MASTERPIECE on PBS. Find out what is ahead in the new season, plus more on the series cast, how to watch previous seasons, and more. (Please note: This feature contains Season 3 plot details.)

Wedding bells chime and animal ailments abound in the highly-anticipated new season of All Creatures Great and Small. Season 3 begins in spring 1939 as James and Helen prepare to walk down the aisle. Should their wedding go off without a hitch—and what are the chances of that?—James will have a new wife and a new stake in the business to think of. The pressure is on, and while his scheme to participate in the government’s practice to test for tuberculosis in cattle will expand the veterinary practice, it could put James on the outs with local farmers. Helen, too, will face new challenges, not least of them letting go of her old life and finding her new place within the welcoming, yet eccentric, embrace of Skeldale House.

Tristan, having passed his exams at long last, must now face the world as a qualified vet. Will he rise to the occasion? And, more importantly, will he win big brother Siegfried’s approval? He certainly will have Mrs. Hall’s unconditional support. But in Season 3, she may be ready to open up to affection beyond her work family…and cricket. As war with Germany looms on the horizon, Skeldale House’s irrepressible but unpredictable proprietor, Siegfried, contends with painful memories of his own experiences during the First World War, when he served in combat with the Army Veterinary Corps. And mrs. Pumphrey, the wonderfully eccentric owner of Tricki, returns with her pampered Pekingese.

Nicholas Ralph made his television debut as All Creatures Great and Small’s James Herriot. Ralph trained at the prestigious Royal Conservatoire of Scotland and has since performed in various roles on screen and stage. Ralph starred in the supernatural thriller Pray for the Devil, slated to release in 2022.

Samuel West, who stars as Siegfried Farnon, has dozens of credits to his name across TV, theater, audio, and feature films, including Howard’s End, Notting Hill, and Darkest Hour. Recent television roles include the unscrupulous politician Peter Judd in Slow Horses, the art historian and spy Anthony Blunt in Season 3 of The Crown, and Mr. Hill in Steve McQueen’s Small Ax: Mangrove. MASTERPIECE viewers may remember him from roles on Grantchester (Season 4) and Mr. Selfridge.

Rachel Shenton plays Yorkshire Dales farmer’s daughter Helen Alderson. Fluent in British Sign Language, she won an Oscar® for the live action short she wrote and stars in, The Silent Child. Prior to All Creatures Great and Small, Shenton was best known for her roles on television series including the ABC Family series Switched at Birth, White Gold, and the long-running British soap opera Hollyoaks.

Anna Madeley, who plays Mrs. Hall, has worked extensively in television, film and theater. She has appeared in films such as In Bruges as well as numerous television series, including Patrick Melrose, The Crown, and on MASTERPIECE in The Child in Time and Mr. Selfridge. The actress also starred in the television series Deadwater Fell alongside David Tennant, written by Grantchester writer Daisy Coulam.

Callum Woodhouse portrays Tristan Farnon. Prior to All Creatures Great and Small, Woodhouse was best known to MASTERPIECE fans for the role of Leslie Durrell in the much-loved MASTERPIECE The Durrells in Corfu. He also starred in the British comedy-drama series Cold Feet, and has appeared in Father Brown.”