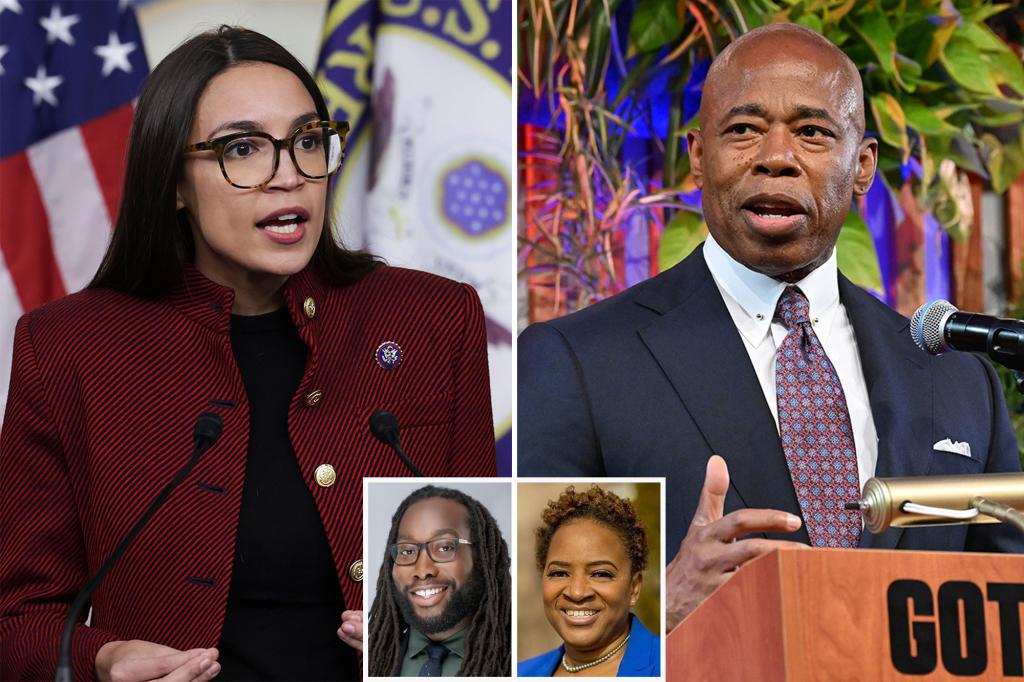 In the latest iteration of Democratic Party infighting, Adams conducted a “walking tour” with Democratic incumbent Assemblywoman Nikki Lucas on the third day of early voting for the June 28 primary in the district that includes East New York, Brownsville and Canarsie.

Lucas is facing off against lefty Keron Alleyne, who is backed by AOC, the Democratic Socialists of America, the Working Families Party and assemblyman-turned-councilman Charles Barron.

Lucas defeated Alleyne in a special election in February for the seat that Barron vacated.

“We got your back Keron Alleyne,” AOC recently tweeted.

“Thank you again @AOC for your continued support and for amplifying this campaign! Always a pleasure to be in spaces filled with organizers who are ready to fight for working class New Yorkers first: # Keron4Assearch #KeronisRunning, ” the insurgent responded.

Adams first endorsed Lucas before she won the special election in February.

“I am honored & humbled to receive the endorsement of Mayor Eric Adams. We both care deeply about issues that impact our community, ” Lucas tweeted then.

Ocasio-Cortez is supporting a slate of 13 DSA defund the police candidates running for state legislative seats, including insurgents seeking to topple entrenched incumbents backed by Adams and the Democratic Party. She is also backing a slew of candidates supported by the left-leaning Working Families Party, with much overlap between the two slates.

Adams campaign adviser Evan Thies confirmed the mayor was touring the district with Lucas Monday and had endorsed her.

The Lucas event was initially put on Adams’ official public schedule but then removed, perhaps out of concern that it would be perceived as a pro-Lucas campaign event instead of a City Hall governmental event.

Meanwhile, Lucas received last minute donations from financial backers of the charter school movement, according to State Board of Election filings: $ 4,700 from both pro-Charter Democrats for Education Reform and hedge fund honcho John Petry, who serves a trustee on the governing board of the Success Academy Network.