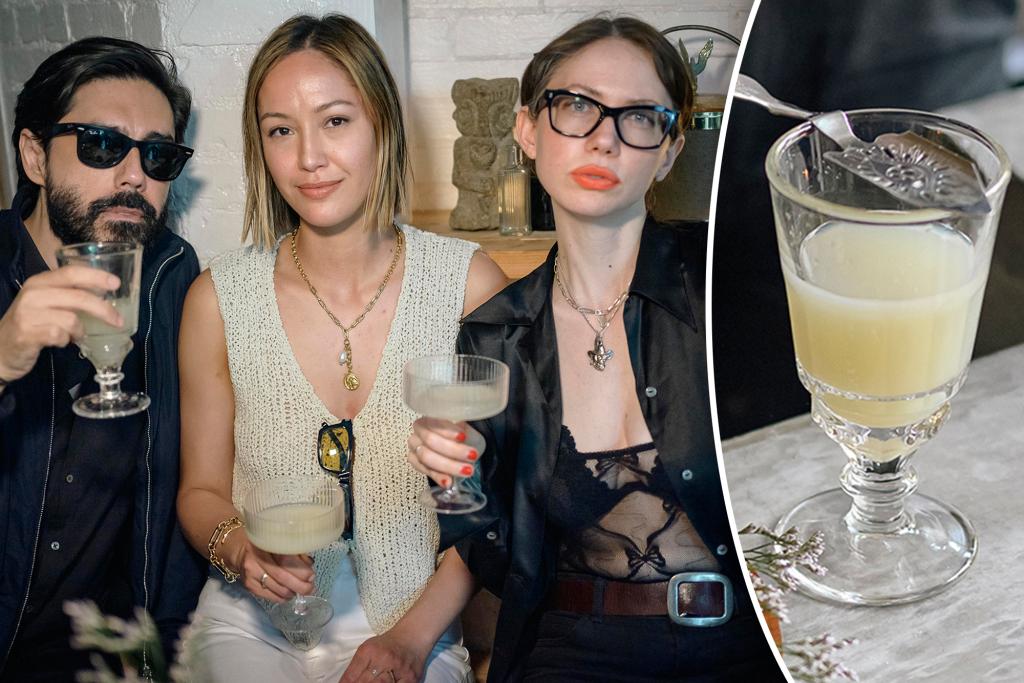 On a recent Sunday evening, candlelight flickered inside a narrow, white brick-walled bar on the Lower East Side where, upon entry, chosen guests had to hand over signed liability waivers acknowledging potential risks.

A group of millennials and Gen Z strangers exchanged pleasantries while seated at a bar that was anchored by an elaborate glass fountain. The ritual started with a shot of coffee liqueur to caffeinate everyone. A blonde-haired host, Griffin Osborne, assured guests that they would not experience hallucinations, a disclaimer with some disappointment.

“It seems like too nice of a place for everybody to be tripping together,” he said as Nena’s “99 Red Balloons” played in the background.

Osborne dropped sugar cubes over perforated spoons and lit them on fire as guests gawked. Then, at last, it was time to drink some absinthe.

“You’re going to get outside of yourself, but you’re not going to lose yourself entirely,” he said, as the social lubricant was sipped. “That’s why we call it a transcendent experience.”

Then a host confirms your reservation and reaches out with the exact location the day of the event, usually Sunday nights. Patrons Venmo operators $ 66 per person for the experience, which includes the absinthe and an assortment of cocktails and wine once seated at a communal table. It’s an intimate, invite-only club where imbibers mingle over the anise-flavored spirit beloved by Picasso, Hemingway and Dali.

But it’s not quite the same hooch those men were swilling. Absinthe was banned in 1912 because it was made with wormwood, a plant species believed to have potentially dangerous hallucinogenic or psychotropic effects. The ban was lifted in 2007, but the legal absinthe now on the market can only contain a trace amount (10 parts per million) of thujone, the chemical compound in wormwood responsible for trippy experiences.

Bedroom 6 serves St. George (60% ABV), which does not contain more than the legal limit of thujone. Still, the mysterious soiree is stirring up buzz among New Yorkers craving human interaction, elegant cocktails and something to boast about on social media.

“We’re using this ritual that’s centuries old as well as putting our own magical alchemy spin on it to really create genuine interactions,” the event’s founder, Rhys. Osborne, 24, told The Post.

The idea for the speakeasy originated on the West Coast in the summer of 2020, at Osborne’s dorm room at the University of Southern California, when he decided to ditch binge-drinking culture and games like beer pong and flip cup in favor of more intimate experiences. . He also wanted to geek out on absinthe’s rich history.

“We thought, ‘How can we create a space that’s about real conversations?'” Said Osborne, who moved to New York in the summer of 2021.

After the “ritual,” Bedroom 6 participants gathered around a table where prewritten prompts – such as “If you could have everyone in the world understand one thing what would it be and why?” and “Describe in the third person what you were like in high school” – were set out on crumpled pieces of paper. It was awkward at first, but guests warmed up to each other as the cocktails took effect.

Mary Suradet, 32, who works in fashion, answered the first prompt by recounting cutting up her clothes to make new garments and loving yearbook class. One of her fellow attendants, Kelsey Castillo, 29, remembered being shy and reserved.

By the end of the night, guests were exchanging numbers and talking of extending the evening with more cocktails at Paul’s Casablanca or perhaps an underground rave.

“We say the absenthe ritual primes people have to have an open heart,” said Osborne. “It’s an ice breaker that gets them on the same page, but really the magic happens when they sit at the table.”

Ernesto Castro
Joey King Is Not Your Average Princess. She’s a #GirlBoss Princess.
Gas prices are skyrocketing. Here’s why people haven’t cut back on spending – yet