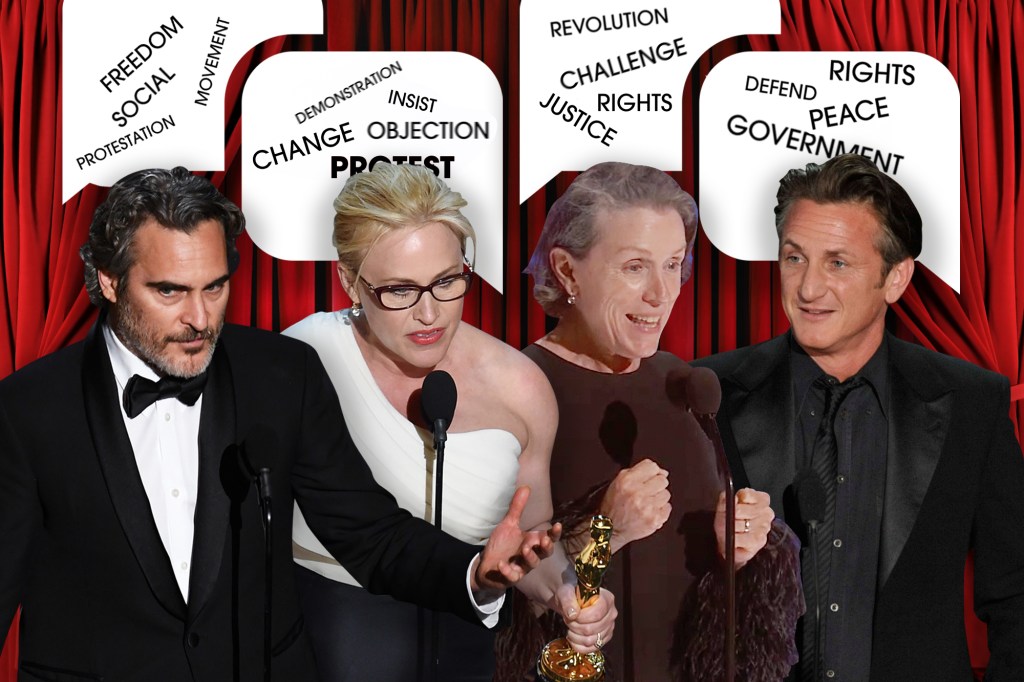 Social and political issues have been ravaging our world since the beginning of time.

But that never stops Hollywood from giving its two cents about everything.

Whether they’re winners or presenters, A-listers have taken to the Academy Awards stage year after year, decade after decade, to voice their opinions on matters that plague the globe, hoping to enlighten the worldwide audience on whatever issue they feel so strongly. about.

The prestigious Oscars podium has become a designated, glorified soapbox for the so-called Hollywood elite to chime in on controversial topics including Hollywood’s gender pay gap, oppressed people’s rights and climate change – all subjects that have found their spotlight on the Dolby Theater stage.

This year’s star-studded ceremony – set for 8 pm on March 27 and airing on ABC – will surely be no different.

Here are just some of the stars – including Oscar-winners Joaquin Phoenix, Patricia Arquette and (in absentia) Marlon Brando – who took the Oscars stage by storm and told the general public how they should ponder the world’s greatest problems.

Former couple and liberal die-hards Susan Sarandon and Tim Robbins had a wild moment at the 1993 show when they presented the award for Best Editing together.

During their time at the podium, Robbins, 63, said he wanted to “call attention” to more than 200 Haitians who were being held at Guantanamo Bay. “Their crime: testing positive for the HIV virus,” he declared. Sarandon, 75, then urged the US government to rectify the situation.

“On their behalf, and on behalf of all the people living with HIV in this country we would like to ask our governing officials in Washington to admit that HIV is not a crime, and to admit these people into the United States,” the actress said. said.

In an interesting twist, the left-leaning duo announced that the Best Editing award went to Joel Cox for “Unforgiven,” a film that won three additional Oscars, including Best Picture and Best Director – for conservative stalwart, actor and filmmaker Clint Eastwood, 91.

Frances McDormand won her second of three Best Actor Oscars in 2018 for her role in “Three Billboards Outside Ebbing, Missouri” and drove audiences’ attention to Hollywood’s gender pay disparity.

The 64-year-old actress implored every female nominee in the theater to stand up with her and demanded that industry execs pay attention to female actors.

“We all have stories to tell and projects we need financed,” she said in her speech. “Don’t talk to us about it at the parties tonight. Invite us into your office in a couple days, or you can come to ours, whatever suits you best, and we’ll tell you all about them. I have two words to leave with you tonight, ladies and gentlemen: ‘inclusion rider.’ “

Joaquin Phoenix, 47, has been an outspoken vegan for decades, and at the 2020 ceremony, he spoke at length depth about “the distressing issues we’re facing,” including gender equality, racism, animal rights and environmental concerns.

“I think at times we feel or are made to feel that we champion different causes. But for me, I see commonality, ”the“ Joker ”actor said as he proceeded to go in-depth with the few minutes he had onstage. “I think, whether we’re talking about gender inequality or racism or queer rights or indigenous rights or animal rights, we’re talking about the fight against injustice.”

He went on to claim that people have become “very disconnected from the natural world” and, perhaps ironically, saying that many people share the belief that we’re the center of the universe.

“We go into the natural world and we plunder it for its resources. We feel entitled to artificially inseminate a cow and steal her baby, even though her cries of anguish are unmistakable. Then we take her milk that’s intended for her calf and we put it in our coffee and our cereal, ”he droned on.

He then extolled about his “extraordinary life” as a Hollywood A-lister.

“I think the greatest gift that it’s given me, and many of us in this room, is the opportunity to use our voice for the voiceless.”

Native American civil rights activist Sacheen Littlefeather stepped in for Marlon Brando at the 1973 show when he refused to accept the prestigious Best Actor award for “The Godfather” and instead sent in Sacheen in his place to protest the mistreatment of indigenous people by Hollywood.

While her speech earned both applause and boos from the audience, she firmly stood her ground.

“The reasons for [Brando’s refusal] are the treatment of American Indians today by the film industry – excuse me – and on television in movie reruns, and also with recent happenings at Wounded Knee, ”said Littlefeather, now 75.“ I beg at this time that I have not intruded upon This evening and that we will, in the future, our hearts and our understandings will meet with love and generosity. “

Not long after, Clint Eastwood – before presenting the Best Picture Oscar – controversially quipped, “I don’t know if I should present this award on behalf of all the cowboys shot in all the John Ford westerns over the years.”

Patricia Arquette, 53, spent much of her time accepting the Best Actress in a Supporting Role award for “Boyhood” declaring her stance on equal pay for women.

“To every woman who gave birth to every taxpayer and citizen of this nation, we have fought for everybody else’s equal rights,” she stated in her speech. “It’s our time to have wage equality once and for all and equal rights for women in the United States of America.”

When the drama “Spotlight” – which chronicled how the Boston Globe exposed allegations of child molestation in the Catholic Church – won Best Picture in 2016, the producers and cast made their way to the stage to accept the statuette. One producer, Michael Sugar, had a bone to pick with Pope Francis about protecting kids from sexual abuse.

“This film gave a voice to survivors and this Oscar amplifies that voice, which we hope will become a choir that will resonate all the way to the Vatican,” Sugar expressed. “Pope Francis, it’s time to protect the children and restore the faith.”

British thespian Vanessa Redgrave roared about “the threats of a small bunch of Zionist hoodlums” during her acceptance speech for Best Supporting Actress Oscar for “Julia.”

“[Their] behavior is an insult to the stature of Jews all over the world and to their great and heroic record of struggle against fascism and oppression, ”said Redgrave, 85.“ And I salute that record, and I salute all of you, for having stood The firm and dealt a final blow against that period when Nixon and McCarthy launched a worldwide witch hunt against those who tried to express in their lives and their work the truth that they believed in. “

Former Vice President Al Gore hit the stage to receive the Oscar for Best Documentary for his documentary “An Inconvenient Truth,” which looked at the dangers of global warming. Perhaps unsurprisingly, Gore spent his speech preaching about climate change.

“My fellow Americans, people all over the world, we need to solve the climate crisis. It’s not a political issue, it’s a moral issue, “said Gore, 73.” We have everything we need to get started with the possible exception of the will to act. That’s a renewable resource. Let’s renew it. “

Penn famously won the award for Best Actor for “Milk,” in which he portrayed slain gay activist and lawmaker Harvey Milk.

The “Mystic River” actor advocated for LGBTQ + rights in his speech, urging anti-gay protesters to re-examine themselves.

“Those who voted for the ban against gay marriage” need to “sit and reflect and anticipate their great shame… if they continue that way of support,” Penn, now 61, said. “We’ve got to have equal rights for everyone.” Full marriage rights were subsequently passed via the 2015 Supreme Court decision in Obergefell v. Hodges.

Leonardo DiCaprio, 47, is an outspoken advocate for climate change and used his time on the 2016 Oscars stage to do just that. After he won the trophy for his role as a hunter in “The Revenant,” he apparently spoke directly to world leaders to prompt them to help the environment.

“We need to support leaders around the world who do not speak for the big polluters, but who speak for all of humanity, for the indigenous people of the world, for the billions and billions of underprivileged people out there who would be most affected by this, ”he said. “For our children’s children, and for those people out there whose voices have been drowned out by the politics of greed.”

Gael Garcia Bernal, 43, and Hailee Steinfeld, 25, presented Best Animated Feature in 2017 and took a shot at former President Donald Trump. The Mexican “Motorcycle Diaries” actor questioned the businessman and reality show host-turned-politician’s idea of ​​building a wall along the border of Mexico.

“Actors are migrant workers; we travel all over the world. We built a life that cannot be divided, ”Bernal proclaimed. “As a Mexican, as a Latin American, as a migrant worker, as a human being, I’m against any form of wall that wants to separate us.”

When Richard Gere – a longtime friend of the 86-year-old exiled Tibetan leader the Dalai Lama – got up to present the award for Best Art Direction in ’93, he used his few minutes to directly address then-Chinese leader Deng Xiaoping about the “Horrendous human rights situation in China,” as well as Tibet.

The 72-year-old “Pretty Woman” star said he hoped that “something miraculous, really kind of movielike, could happen here,” outlining a scenario “where we could all kind of send love and truth and a kind of sanity to Deng. Xiaoping right now in Beijing, that he will take his troops and take the Chinese away from Tibet and allow these people to live as free independent people again. “

Gere was banned from attending the ceremony again until 2013 when his 2002 movie musical “Chicago” – which was nominated for 12 awards, and won Best Picture, in 2003 – was feted with a cast reunion at the ceremony.

We have a bonus 13th celeb for you. Matthew McConaughey, who in 2014 won Best Actor for his role in “Dallas Buyers Club,” and used his soapbox to support no cause in particular. He offered up a poignant – if rambling – speech about God, the late stage actor Charles Laughton, and his own father’s fondness for gumbo, lemon meringue pie, Miller Lite and dancing. (Watch it above.)

Janice Shirey
14 Celeb Couples Who Had A Fairytale First Date And 10 Whose First Dates Were A Disaster
CTA worker charged with shooting, critically injuring man during Red Line fight held without bond